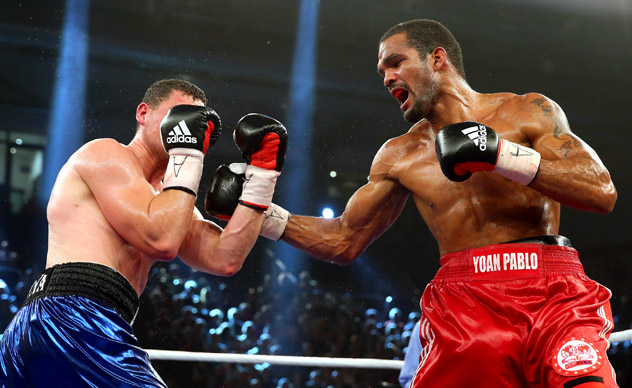 A deal has been reached for cruiserweight Ola Afolabi to challenge for the IBF title held by RING champion Yoan Hernandez on Dec. 6 in Germany, Afolabi’s promoter, Tom Loeffler of K2 Promotions, informed RingTV.com on Tuesday.

The title shot will be the fourth for Afolabi (21-3-4, 10 knockouts), 34, who has lost twice and battled to a draw against WBO beltholder Marco Huck, THE RING’s No. 2-rated cruiserweight, who has made a division-tying 13 title defenses.

“The fight will be on Dec. 6,” said Loeffler. “I think that Ola will do better against Hernandez.”

IBF Championships Chairman, Lindsey Tucker, had confirmed the agreement in an email RingTV.com.

Promoted by Sauerland Promotions, Hernandez (29-1, 14 KOs), 29, is coming off a split decision in August over Firat Arslan.

Afolabi was last in action in July for a third round knockout of Anthony Caputo Smith that represented his second consecutive win since falling by majority decision to Huck in June 2013.

The victory over Arslan was the 15th straight during a run that has included six knockouts for Hernandez, whose only loss happened in March 2008 when he was stopped in the third round by Wayne Braithwaite.

Loeffler is encouraged by the fact that Afolabi has performed so well against Huck and that Hernandez struggled against Arslan.

“Even though Hernandez is a better skilled fighter than Huck, he’s not as physically strong as Huck,” said Loeffler. “All of Ola’s fights with Huck were very close and I think that Hernandez’s style will fit better with Ola’s. So I think that we’ll see Ola win the world title this time.”

According to a release, Sauerland Event plans to announce a television partner during a Thursday press conference in Berlin, Germany, in the wake of news that the German television network ARD will not renew the company’s expiring contract. As a result of the situation, Huck left Sauerland after 10 years to pursue a clash with RING heavyweight champion Wladimir Klitschko.