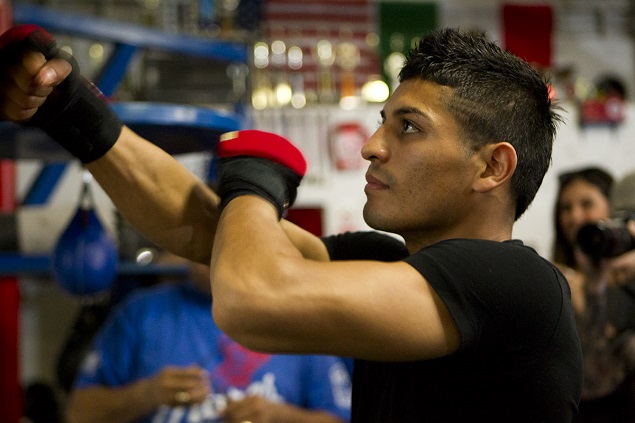 Calling his decision “more about comfort than anything,” three-division titlist Abner Mares confirmed his return to longtime trainer Clemente Medina after just one fight under veteran trainer Virgil Hunter.

Mares announced the move on his Twitter account on Tuesday, stating, “So I’m happy to announce that I’m back with my old trainer, the man that took me to 3 world titles ‘Clemente Medina.’ Mares is back.”

In his last fight in July, his sole bout under Hunter, Mares survived a cut over his left eye during a unanimous decision over rugged Jonathan Oquendo on the undercard of Canelo Alvarez’s split decision victory over Erislandy Lara.

Oquendo represented Mares’ first fight since August 2013 when he was dethroned as WBC featherweight titleholder following a shocking first round knockout loss to Jhonny Gonzalez. Mares was THE RING’s No. 5-rated pound-for-pound fighter entering the bout with Gonzalez, who floored him twice.

Mares, 28, had said that it was difficult to split from Medina, under whom he debuted as a fighter and won his three title belts.

Mares was with Medina when he twice defeated ex-beltholder Joseph Agbeko and earned a decision over former titlist Vic Darchinyan and worked with Joel Diaz as he battled to a draw with then-titleholder Yonnhy Perez – all four fights coming within a 20-month span as a bantamweight.

In November 2012, Mares scored a unanimous decision over WBA bantamweight titleholder Anselmo Moreno, who rose in weight to challenge for the junior featherweight belt. Mares dropped the Panamanian in the fifth round and ended his 27-bout winning streak.

Mares spoke to RingTV.com on Tuesday evening about his return to Medina in this Q&A:

RingTV.com: Why did you decide to return to Medina?

Abner Mares: First of all, me and Clemente, we never parted on bad terms. I had spoken to him well before I went to Virgil. So I talked to him before doing that. I wanted him to know that I valued our history together and I wanted to get an okay from him as well.

I don’t want to say that he gave me permission but he was OK with it. We had a good conversation about it. With Virgil, I was just saying to him that it’s all about comfort, man. So it was more about comfort than anything. I didn’t feel comfortable at all. Virgil is a great trainer and I was learning a lot; I’ll tell you that. But it was just not my style and not my area, I should say.

RingTV.com: So how did you break the news to each of the trainers?

And I can tell you his exact words. He said, “Son, I’ve been waiting to hear those words come out of your mouth for a very long time.” So he was really glad to hear that and to be working with me again. Virgil, I mean, he understood. I mean, I can’t say anything bad about him. He’s a guy who mentored me a lot and he’s a good teacher. Every time that I went to the gym, I was learning something.

And that was learning not just by doing it and putting in the work but he’s that type of guy who gives you good teaching instructions. When I broke the news to him, he was like, “You’re still a champion and you’re a grown man; you can do whatever you want. Just go wherever you feel comfortable.”

RingTV.com: How much of your switch to Hunter had to do with the loss to Gonzalez?

I mean you can name them. I was with Floyd Mayweather Sr.; I was with Clemente. I was with Oscar Suarez and Nacho Beristain, Joel Diaz; the list goes on. But I’m smart enough and wise enough to learn from all of these styles and to put them all to work.

I was with Joel Diaz against Perez and then I was with Clemente when I fought Anselmo Moreno, [Daniel] Ponce de Leon and Jhonny Gonzalez. I don’t know if you’ve noticed but the fans have seen it but I’ve learned to adapt to any type of style because of all of these different coaches.