Despite troubled past, Molina has family’s support vs. Bundrage 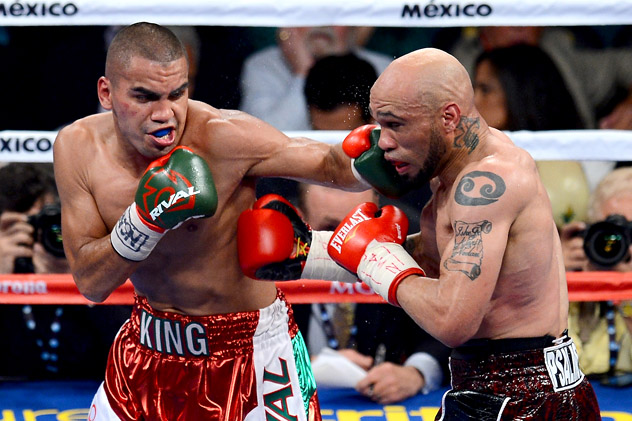 Sarah Anaya has little but praise for Carlos Molina, her 11-year partner and the father of their 10-year-old son, Christian.

“When Carlos is at home with us in Chicago, we spend every single day together. When he’s not around, it’s like the other half of me is missing. Him not being around, that’s a big piece of the puzzle that is missing,” said Anaya, 33, whose son is a fifth-grader.

“When Carlos is not around, Christian really misses him because Carlos is a father is very involved and they spend so much time together. He does homework with Christian every single night. They watch man movies together. Missing his dad out of his life is very hard. I can’t fill the shoes of both parents, being the mom and the dad.”

In her first interview about the subject, Anaya adamantly defended Molina in the wake of his arrest in Las Vegas in March for a 2007 warrant in Wisconsin for failing to register as a sex offender.

A Mexican citizen who also had immigration issues preventing him from staying in the U.S., Molina’s arrest occurred on March 4 in the lobby of the MGM Grand, just four days before Molina was to defend against Jermall Charlo.

Molina won the IBF’s junior middleweight belt following a split decision that dethroned Ishe Smith in his last fight in September 2013 but has been relegated to his native Mexico and separated from his family since his release in June.

“It was a long time ago and I know all of the details of the situation and all of the circumstances. I understand exactly what happened and I don’t hold it against Carlos. At the end of the day, he is an amazing person. Carlos is just so genuinely good and that’s what attracted me to Carlos,” said Anaya.

“His heart is so good and he’s so kind and giving. He’s not arrogant. He treats me so well and he’s such a good father and partner in my life. The situation, as it stands, it’s unfortunate. It’s not pleasant and I wish that it didn’t happen. But I definitely don’t think that it’s a mark on his character because Carlos is a good man.”

Molina (22-5-2, 6 knockouts) will have been out of action for 13 months when he enters the ring to defend his belt on Saturday against former titleholder Cornelius Bundrage (33-5, 19 KOs) at the Oasis Hotel Complex in Cancun, Mexico. The fight will be televised on ESPN Deportes.

Molina was released after two months of incarceration, signed with advisor Al Haymon and had been training with Armando Rayon at Mexico City’s Bodega 54 Gym before arriving this week in Cancun.

Anaya and Christian joined Molina on Sunday in Cancun, their presence serving as motivation rather than distraction, according to the boxer.

“She’s my best friend for sure. It’s definitely not a distraction but it’s just the opposite. This is the biggest reason why I do this sport. It’s for them. I want to make sure that Christian has a better future, a good future. So I want to provide for him in that regard.
That’s why I work extra hard is for him,” said Molina, who is also trained by Victor Mateo.

“Having them here and seeing them here and knowing that they’re happy, I really like that. It’s something that just makes me feel more comfortable. It doesn’t bother me. They understand that when it comes to fight time, they’ll give me my room. I sleep in my own bed and I just get ready for the fight. Then after the fight, it will be back to the family.”

“As strong as Carlos is, mentally, he’s been able to come out of a bad situation, train successfully and turn a negative into a positive. Physically, he looks amazing and I think that there is an added motivation with all of the stuff that he’s gone through over the last nine months or so,” said Anaya.

Molina has indeed persevered over the course of a career characterized by disputed decision losses and setbacks, the last of which was was a controversial 10th round disqualification loss to James Kirkland in March 2012.

“Carlos has always been, like, everything happens for a reason. It’s never affected his ability to work hard and to keep moving forward. That’s the thing that I love about Carlos the most,” said Anaya of Molina.

“Carlos has always gotten right back up and never stay down, even though this journey with him for the last 11 years has been very, very difficult. Without him, I couldn’t have made it through all of this. He’s just unwavering in his belief that he’s going to make it to where he’s going. It’s incredible.”

Molina took an unbeaten streak of 11-0-1 with just two stoppages into the fight with Kirkland. Molina’s last loss prior to Kirkland was by eight-round majority decision against junior welterweight contender Mike Alvarado in February of 2007.

“I was just never given anything throughout my career. If anything, there were always things taken away from me like close decisions against guys who were fighting in their own hometowns. But that’s just been my career…I took a fight on six days notice against Danny Perez and I still won,” said Molina, referring to a unanimous decision victory in June 2009 in Miami, Florida.

“It’s just always been that way. So it’s been a tough road but I always knew that if I just stayed focused and stayed in the gym and that if I continue to work hard, then I can’t be denied. No matter what, they just have to take it from me. Now more than ever, since I have this belt, they’re literally going to have to take it from me in a fight. That makes me feel good. It makes me feel focused and work hard, which I have done.”

Molina has won three straight since the Kirkland loss, having rebounded with decisions over Damian Frias in August 2012 and ex-beltholder Cory Spinks in February 2013 before defeating Smith.

Bundrage, 41, is 5-1 with three knockouts over the course of his last six fights. He was last in action for a unanimous decision over Joey Hernandez in January to rebound after losing the IBF belt to Smith via majority decision in February 2013.

“Cornelius Bundrage is a great fighter but I feel that all of the hard work has been done, for me, right now. So it’s time to execute the game plan in the fight. I just need to win, and that’s No. 1. But I think that I have a really good chance to show my talents,” said Molina.

“This is the biggest fight that I’ve ever had and I just have to show the people who are doubting me that even after being off a year, that I can demonstrate my skills by having the best performance of my career and that’s what I’m planning to do.”

Molina hopes to return to Chicago as promoter, Leon Margules of Warriors Boxing, is trying to sort out the immigration issues.

“So there is nothing that prevents him from staying in the United States but he agreed to be deported, so he can’t come back to the United States unless he gets a special visa. But what got him deported is no longer on his record.”

Anaya is doing her best to stay positive.

“I’m optimistic that everything is going to work out for the best and that he is going to be coming home. I feel that a lot of issues that were going on have been cleared up and that we have managed to put ourselves in a position to obtain a visa in the future,” said Anaya.

“That’s just how our attitude has been through the past 11 years with him trying to become champion. He’s just worked hard and remained optimistic, no matter what he’s had in front of him. So I think that it’s going to happen. Just like everything else, I feel like the cards are all going to fall back into place and he’s going to be coming home and hopefully permanently.”