Sadam Ali to take ’20 steps up’ vs. Luis Carlos Abregu 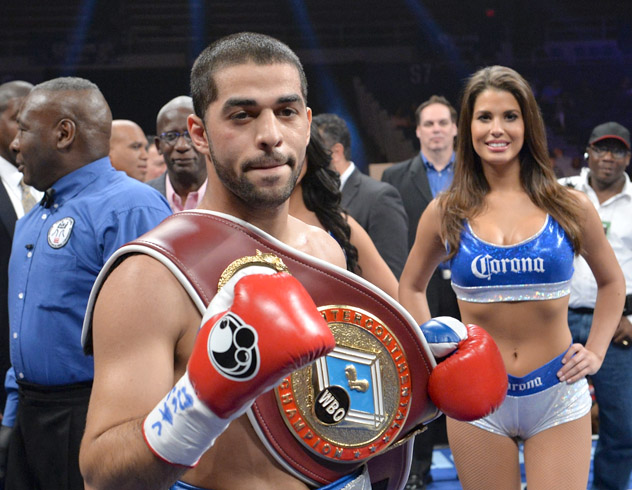 07
Oct
by Lem Satterfield |
The father of undefeated welterweight Sadam Ali said his son will be taking “20 steps up” in competition against hammer-fisted Argentine contender Luis Carlos Abregu on the Nov. 8 undercard of the Bernard Hopkins-Sergey Kovalev light heavyweight title unification bout at Boardwalk Hall in Atlantic City.

“This is a fight that HBO wanted and I know that it’s a big step up for Sadam. Not just one step but 20 steps up,” said Mahmoud Ali, a member of Team Ali. “It’s a good opportunity for Sadam and it’s going to be a great fight. Eventually, you have to step up anyway, so taking somebody like Abregu is a big fight. Every fighter that is coming up, their time is going to come where they have to step up against somebody,”

The 30-year-old Abregu (36-1, 29 knockouts) has won seven straight fights, six by stoppage, since falling by unanimous decision to Tim Bradley in July 2010. Among Abregu’s victories during his run was a seventh round knockout against previously unbeaten prospect Thomas Dulorme in October 2012.

Ali (20-0, 12 KOs) has stopped four of his past six opponents and was last in action for a split-decision over Jeremy Bryan in August.

Abregu ended a nearly one-year ring absence with an eighth round TKO of previously unbeaten Jean Carlos Prada in April, rising from a seventh round knockdown to do so before his hometown fans in Mexico.

Having been out of action action since April 27 of last year because of a right hand injury, Abregu nevertheless was impressive against Prada, who had scored knockouts in three of his previous four bouts. Prior to Prada, Abregu scored a unanimous decision over Antonin Decarie, who entered their fight with a mark of 27-1.

“I’ve always known that this time was going to come. Who it was going to be against, I wasn’t sure. But HBO brings up Abregu and Abregu is a great fighter,” said Ali. “Like it’s been said, a lot of people have avoided him because of his power. He’s got that one-punch knockout power. So no matter who you are, he can catch you. But I just have to be ready.”

A resident of Brooklyn, N.Y., Ali has fought three of his past four bouts at Barclays Center in Brooklyn, comprised of triumphs over Jesus Selig and Jeremy Bryan as well as a unanimous decision over Jay Krupp in September 2013. Trained by Andre Rozier and Lenny Wilson, Ali rose from a first round knockdown against Krupp, whom he dropped in the third and eighth.

“I train at my own gym in [Bedford-Stuyvesant] and I think that my fans will definitely follow me to Atlantic City. It’s close to home and that’s what I wanted. I’m very excited about fighting close to home because everybody can come down and watch me,” said Ali, who will make his Atlantic City debut.

“I definitely feel some pressure because this is my step-up. But this is not only a step-up that I’ve been waiting for for a long time but it’s coming against a great fighter who has tremendous power. I’m definitely under a lot of pressure but that’s good for me because it keeps me focused and it will make me fight smarter.”