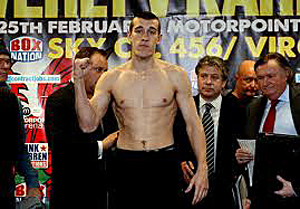 Unheralded light heavyweight Tommy Karpency upset Chad Dawson on Saturday, scoring a 10-round split decision over the former champ in Mashantucket, Connecticut. Karpency won by scores of 96-94, 96-94 and 94-96.

The bout, which opened a live Showtime broadcast from the Foxwoods Resort Casino, was an uneventful and pedestrian contest between two somewhat cautious southpaws. Dawson (32-4, 18 knockouts), who grew up in New Haven, Connecticut, suffered an injury to his left should at some point during the first half of the fight, which eliminated his power hand down the stretch.

Despite the injury, the 32-year-old veteran thought he deserved the decision.

“I hurt my shoulder in the third round,” Dawson told Showtime’s Steve Farhood after the fight. “I fought with one arm from the third round on. I still landed more jabs than he landed total punches. That’s bulls__t.

“They must want me out the game.”

The loss, his third in his last four bouts, does put the former pound-for-pound ranked boxer’s career in question.

With the victory, Karpency, a 28-year-old former title challenger from Adah, Pennsylvania, says he becomes a player in the 175-pound division.

“Of course, I was worried about the decision being in Dawson’s (home state) but I thought I did enough to win,” he told Farhood during his post-fight interview.

“I came in on a little short notice so I had to pace myself,” Karpency said when Farhood asked him why he didn’t press more in the late rounds of the bout. “But I landed all the power shots.

“I could tell he was hurt. He stopped throwing the left in the third round.”

Karpency was still proud of scoring the upset against even a one-armed Dawson.

“Chad had a couple tough losses but that doesn’t mean his skills are gone,” he said. “He’s the last man to beat Bernard Hopkins.”