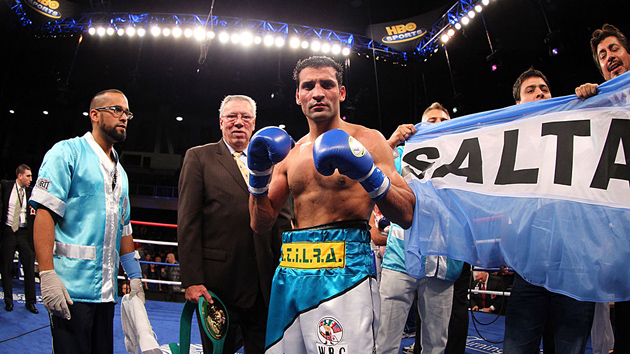 Welterweight contender Luis Carlos Abregu will continue the surge in appearances by Argentine fighters on Nov. 8, when he faces unbeaten Sadam Ali on the undercard of the Bernard Hopkins-Sergey Kovalev light heavyweight title unification bout at Boardwalk Hall in Atlantic City.

Abregu (36-1, 29 knockouts) has won seven straight fights, six inside the distance, since falling by unanimous decision to two-division titlist Tim Bradley in July 2010. Among Abregu’s victories during his run was a seventh round knockout against previously unbeaten prospect Thomas Dulorme in October 2012.

“I’ve been sitting back watching my fellow Argentinian brothers Marcos Maidana, Lucas Matthysse and Diego Chaves all get their opportunities to fight in the U.S. and now it’s my time to show the boxing world the best fighter from Argentina is me,” said Abregu, 30.

“I have been avoided by Manny Pacquiao, Brandon Rios and Ruslan Provodnikov, so I thank Sadam Ali for stepping up to fight me. Nov. 8, I will show the fans why I am the best and most exciting fighter from Argentina. Viva!”

“The ‘Cold War’ is officially over but that peace will not extend to the ring when two of the top contenders in the 147-pound division go head to head in Atlantic City,” said Oscar De La Hoya, founder and president of Golden Boy Promotions.

“I have made a promise to the fans that nothing will stand in our way of putting on the best fights our sport has to offer. Consider this monster match-up between a Top Rank fighter and a Golden Boy Promotions fighter another example of making good on that pledge.”

Abregu ended a nearly one-year ring absence with an eighth round stoppage of previously unbeaten Jean Carlos Prada in April, rising from a seventh round knockdown before his hometown fans in Mexico.

Abregu had been out of action action since April 27 of last year due to an injured right hand but impressively ended a streak of three straight knockout victories by Prada. Prior to Prada, Abregu scored a unanimous decision over Antonin Decarie, who entered their fight with a mark of 27-1.

“Can’t miss this battle. This is youth versus experience,” said Carl Moretti, vice president of boxing for Top Rank. “There is no chance of it going the distance. Whoever wins, wins by knockout.”

But having scored knockouts in five of his past seven fights, Ali (20-0, 12 KOs) is nevertheless undaunted. Ali was last in action in August, scoring a split decision victory over Jeremy Bryan at Barclays Center in Brooklyn, N.Y.

“This is the big fight I’ve been asking for and I’m ready to perform on Nov. 8. Abregu is a seasoned veteran. He hits hard and he comes to fight,” said Ali, 26. “It’s the type of win that will put me in the title picture and I can’t wait to put on a great fight for the fans and bring the win back to Brooklyn.”