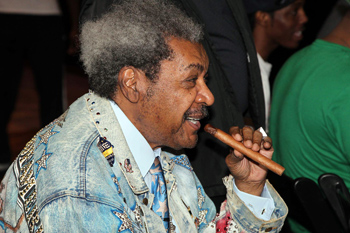 Promoter Don King has been found liable for breach of contract by a Manhattan U.S. District judge in relation to a failed drug test by his cruiserweight, Guillermo Jones, which led to the cancellation of an April rematch with Denis Lebedev, according to court documents obtained by RingTV.com.

Judge Shira Scheindlin ruled in favor of Russian promoters Andrey Ryabinskiy and Vladimir Hrunov, who do business with World of Boxing LLC and who sued king for $2.4 million. Ryabinskiy and King have been directed to submit their briefings as to damages, which are to be determined later.

Jones tested positive for the banned diuretic substance Furosemide, the same substance Jones was discovered to have used prior to his 11th round stoppage victory in May 2013 that dethroned Lebedev as WBA beltholder (since then, Lebedev was reinstated as titlist). The second positive result forced their return bout to be called off just hours prior to the bout.