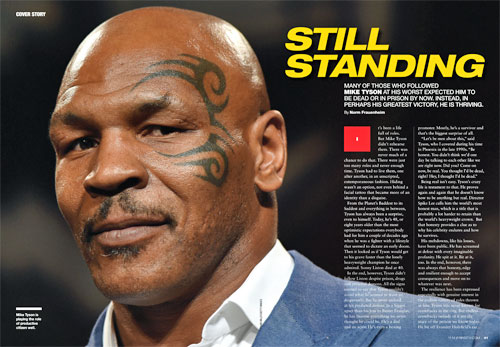 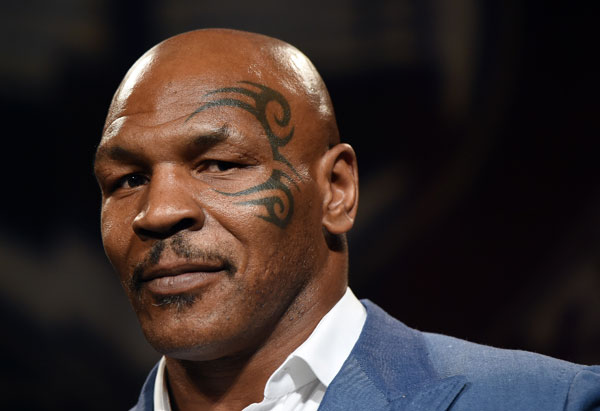 This story appears in the November 2014 issue of THE RING Magazine, which features a cover story on Mike Tyson and a look back at the Rumble in the Jungle on the 40th anniversary of the epic fight between Muhammad Ali and George Foreman.

It’s been a life full of roles. But Mike Tyson didn’t rehearse them. There was never much of a chance to do that. There were just too many roles and never enough time. Tyson had to live them, one after another, in an unscripted, extemporaneous fashion. Hiding wasn’t an option, not even behind a facial tattoo that became more of an identity than a disguise.

From the Planet’s Baddest to its Saddest and everything in between, Tyson has always been a surprise, even to himself. Today, he’s 48, or eight years older than the most optimistic expectations everybody had for him a couple of decades ago when he was a fighter with a lifestyle that seemed to dictate an early doom. Then it looked as if Tyson would get to his grave faster than the lonely heavyweight champion he once admired. Sonny Liston died at 40.

In the end, however, Tyson didn’t follow Liston despite prison, drugs and personal demons. All the signs seemed to say that Tyson couldn’t avoid what he seemed to want so desperately. But he never arrived at his predicted demise. In a bigger upset than his loss to Buster Douglas, he has become everything we never thought he could be. He’s a dad and an actor. He’s even a boxing promoter. Mostly, he’s a survivor and that’s the biggest surprise of all.

“Let’s be men about this,” said Tyson, who I covered during his time in Phoenix in the late 1990s. “Be honest. You didn’t think we’d one day be talking to each other like we are right now. Did you? Come on now, be real. You thought I’d be dead, right? Hey, I thought I’d be dead.”

Enjoy this preview of Mike Tyson: Still standing? The full version can be read in the November 2014 issue of THE RING Magazine, which is on newsstands now.