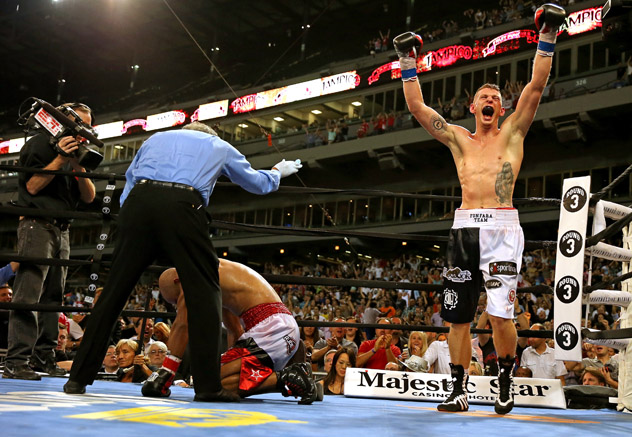 Fonfara (25-3, 15 knockouts) will meet Ngumbu (33-5, 12 KOs) in a main event whose co-feature matches RING No. 9-rated bantamweight Tomoki Kameda in defense of his WBO belt against Alejandro Hernandez.

Fonfara, 26, was last in action in May, rising from knockdowns in the first and fifth rounds of a unanimous decision loss to RING champion Adonis Stevenson, whom Fonfara dropped in the ninth.

Fonfara brought a run of 15 straight victories, 12 by knockout, into the clash with Stevenson, having previously earned last December’s second round knockout of Samuel Miller.

Ranked No. 9 as a 175-pounder by THE RING, Fonfara had last suffered defeat against Derrick Findley by second round stoppage in July 2008.

“This keeps him busy; he gets a nice payday and I think that this is a great fight for Andrzej,” said Margules of Fonfara, who will be fighting in Chicago for the 17th time overall and in Illinois for the 25th.

“It’s another great opportunity against a very solid guy and he’s fighting at home. It’s a nice situation for him to come back into. With Andrzej looking for a good performance before a hometown crowd, next year could be a very exciting one for him.”

Ngumbu, 32, is coming off a unanimous decision over Johnny Muller in June, representing his second straight win since falling by split decision to Igor Mikhalkin in July 2013.

Ngumbu will be fighting on American soil for the first time against Fonfara and owns unanimous decision victories over former title challengers Vyacheslav Uzelkov and Aleksy Kuziemski.

“This is a solid guy and you’re not going to be in a main event on Showtime without fighting a solid guy,” said Margules of Ngumbu.

“Andzej was very popular in Chicago before the Stevenson fight and we’d get tremendous gates whenever he fought. So it will be interesting to see how he does this time.”

Kameda was last in action on July 12, celebrating his 23rd birthday with a left hook body shot that dropped and stopped Pungluang Sor Singyu at the 1:35 mark of the seventh round.

It was the first knockout loss for Sor Singyu and the U.S. debut for Kameda, who later signed with advisor Al Haymon.

Another bout on the card matches southpaw Javier Fortuna in a junior lightweight fight against Abner Cotto.

Fortuna, 25, is coming off a unanimous decision over Juan Antonio Rodriguez in May and Cotto, 27, a split decision win over Jerry Belmontes in August to rebound from a loss to Francisco Vargas in March.