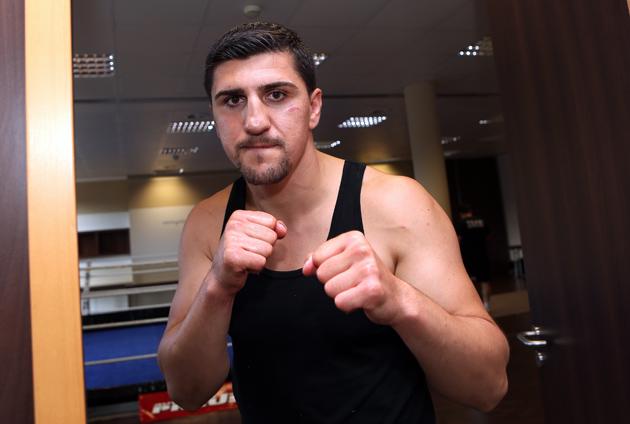 RING No. 2-rated cruiserweight Marco Huck plans to leave Sauerland Event after 10 years and pursue a clash with RING heavyweight champion Wladimir Klitschko, according to the German newspaper Bild Sport.

Huck (38-2-1, 26 knockouts) is coming off last month’s unanimous decision over previously unbeaten Mirko Larghetti that represented his division record-tying 13th defense of the WBO’s belt. Huck did lose a disputed majority decision to Alexander Povetkin in February 2012, though that fight took place at heavyweight.

“I am very grateful to [company founder] Wilfried Sauerland,” said Huck, who has started his own company, Huck Sports Promotion, according to Bild Sport. “I decided to take the reins into [my] own hands.”

“As a great champion, I want to be independent. Now I am free for Klitschko. I dream of big fights, even in the United States. I want to fight the best,” said Huck, 29. “Klitschko is at the top with me. I want to leave in peace and hope [Sauerland] will place no obstacles in the way. It was a successful time together.”

Huck said he will team with the management company UFA Sports and pursue Klitchko or division rivals such as WBC Grigory Drozd and the WBA’s Dennis Lebedev as well as the winner of a Nov. 22 rematch between Nathan Cleverly and Tony Bellew.

“The UFA Sports team headed by Philip Cordes and Karsten Mahlmann has proven in the past that they are more than capable of staging big fight nights. I am convinced that currently this is the best constellation for my career and my financial interests,” said Huck, in a release by Huck Sports Promotions.

“Denis Lebedev and Grigory Drodz would be attractive opponents as well as the winner of Bellew vs. Cleverly. But, obviously, the heavyweight division is in the back of my mind, and, ultimately, I want to take on Wladimir Klitschko for the heavyweight crown.”

Former undisputed middleweight champion Jermain Taylor (32-4-1, 20 KOs) is planning to make up for “a bunch of mistakes in boxing” on Oct. 8 against IBF 160-pound titleholder Sam Soliman (44-11, 18 KOs) at the Beau Rivage Resort and Casino, Biloxi, Mississippi.

“Things have come full circle for me. I have another shot to become a world champion and I’m not going to let this opportunity pass by without being victorious,” said Taylor, 36.

“I’ve made a bunch of mistakes in boxing, losing to fighters I shouldn’t have lost to because of a lack of training, but I’m ready to clear all that up. With hard work and dedication, I’ll be 110 percent ready. I think Sam Soliman is a great fighter. He’s had a great career and he comes to fight. But I have to go in there and beat the hell out of him.”

Soliman, 40, won the belt with a unanimous decision over Felix Sturm in his last fight in May.

“Jermain Taylor, he’s been there, done that. He’s been a world champion himself,” said Soliman. “I’m excited about the fact that I’m fighting a guy who has won all the belts. I’m keen on doing that. He’s done what I’m looking forward to doing myself. It’s a rich scalp for me.”

In the co-feature, Andre Dirrell will meet Nick Brinson.