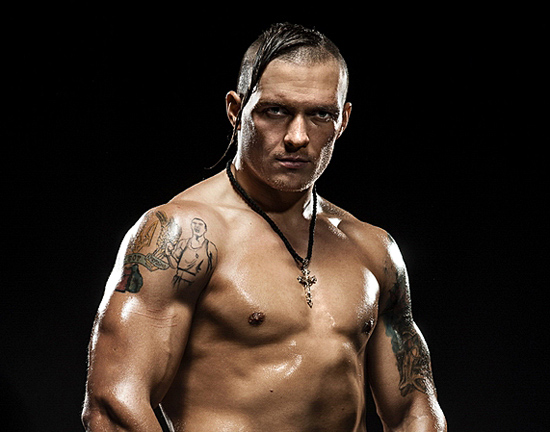 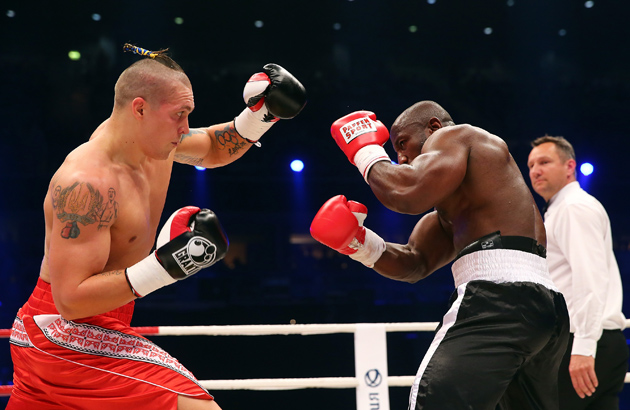 The 2012 Olympic gold medallist is happy with all of his fights to date but picks out his most recent fight as the one that he feels was his best so far.

“I like all four,” Usyk told RingTV.com through Yulia Diachenko of K2 Promotions Ukraine. “Maybe my last fight against Argentinean Cesar David Crenz was the best ’cause I precisely followed all directives of my coaches James Ali Bashir and Sergiy Vatamanyuk during whole fight.

“As a result I brutally finished Crenz by perfect body punch in the fifth round and that was exactly such outcome as we planned before the fight.”

Worst night of pro career: With four wins against steadily improving competition it’s hard to find fault with any of the big southpaw’s performances at this point.

“I think everyone of my pro-fights was decent so far ’cause I put all my heart into every fight when I came into the ring,” said Usyk.

Next fight: Usyk isn’t wasting time. He steps up to the 12-round distance when he faces South African puncher Daniel Bruwer (24-5-1, 21 knockouts) for an intercontinental cruiserweight title on Saturday.The bout takes place outdoors at the Arena Lviv Stadium, where an estimated 30,000 fans are expected to attend the event.

“I saw a couple of Bruwer’s fights,” said the 27 year old. “My future opponent is a big and physically strong guy who has a fine record and some boxing skills. I think that he is a decent rival.”

His trainer James Ali Bashir, who was the assistant trainer to Emanuel Steward at the Kronk gym for 17 years, is respectful of Bruwer.

“We’re looking to stop Bruwer, we don’t anticipate it’ll be easy but we’ll find a way.”

Why he’s a prospect: The gifted Ukrainian entered the pro game following a stellar amateur career that culminated in winning gold at the 2012 Olympics in London in the heavyweight (201-pound) class.

The amateur standout fought in the WSB (World Series of Boxing) for the Ukrainian team “Ukraine Otamans” as a super heavyweight. He became vice-champion in the third WSB season, winning all his fights, going 6-0, scoring 2 knockouts.

Last year his manager Alexander Krassyuk brought Usyk to Wladimir Klitschko’s training camp for a few days. After working with Usyk, Bashir was so excited at the prospect of working with him he told Krassyuk “I would even fly to the moon to work with this guy and make his a champion.”

Bashir would later say at a press conference announcing Usyk’s fight with Bruwer “In my mind Oleksandr is the next best thing in boxing, especially in the cruiserweight division.”

Despite Bashir and Usyk not speaking the same language they are able to understand each other and work well together.

Former heavyweight champion, Vitali Klitschko, one half of the K2 Promotional company expects big things from the fighter.

“I’m sure that Oleksandr has huge charisma and great boxing skills to make Ukrainian people and boxing fans all over the world enjoy his fights for a long time,” the elder Klitschko said in a prepared statement. “His fervour, energy and purposefulness will definitely bring him to the top of the world in pro boxing.”

Why he’s a suspect: At this stage there appear no obvious weaknesses. Usyk has taken to the professional game like a duck to water. However, it will be interesting to see how he deals with the pace of a 12-round fight against the more seasoned Bruwer. It’s not something that he appears unduly concerned about.

As with every boxer, Usyk knows he needs to work on the subtleties and nuances of the pro game.

“Right now we try to increase power and the amount of my punches,” he said. “And improve the work of right hand (He’s a southpaw). Also we work on my footwork to improve my ability to cut the space off during my attacks.”

Story lines: Usyk was born in Simferopol City (the capital of Crimea), Ukraine, and still lives there with his family. He took up boxing at 15.

“Before my first visit to a boxing gym I played soccer and was good in that sport,” he commented. “But soccer equipment was too expensive in my country so my family wasn’t rich enough to continue to support me playing soccer.”

He needed something to do and traded in his football boots for boxing gloves.

“I decided to go into boxing gym soon ’cause you don’t need too expensive equipment for being a boxer,” said Usyk. “On the other hand, I previously knew that I definitely can fight because of many winning street fights which I was involved in during my boyhood.

“So I started to visit boxing gym and realized soon that I definitely have huge potential to be successful in this sport.”

When Usyk decided to turn pro, he travelled the globe with fellow Ukrainian star Vasyl Lomachenko, the two spoke with many promoters. While Lomachenko signed with Top Rank, Usyk elected to go with K2 Promotions.

The extremely popular Usyk is thought of as the heir to the Klitschkos’ throne. He has sponsorship with MTC (one of two biggest Ukrainian mobile companies) and was the brand face of Gillette Fusion Proglide.

He shares a birthday with his favorite boxer Muhammad Ali.

Roughly one month after the annexation of Crimea by the Russian Federation Usyk declared (on April 28) he would never exchange his Ukrainian citizenship for a Russian one and that he still considered Crimea a part of Ukraine.

He’s married to Yekaterina (Catherine in English), who he has known since their school years. They have two children Yelizaveta (Elizabeth in English) who’s five and Kirill who was born last year. Usyk has tattoos of their names on the shoulders.