A tribute to ring announcer Ed Derian, the voice of Philadelphia boxing 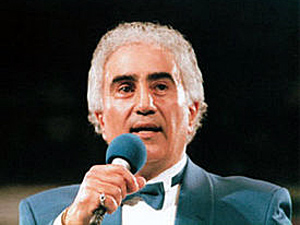 Most fight fans didn’t know his real name, which is probably just as well because they probably wouldn’t have been able to spell or pronounce it in any case. So the man with the velvety-smooth tones who came into this world as Setrha Ejdaharian – he was proud of his Armenian heritage, and never considered legally changing his name – chose to call himself Ed Derian for professional purposes.

For the better part of four decades, Ed Derian, who was 77 when he passed away on Sept. 26 at Kindred Hospital in Havertown, was the distinctive voice of Philadelphia boxing, the longest tenured and most cherished ring announcer to have graced local rings. But the reputation of this Philly-born son of Turkish immigrants extended throughout the nation and even the world, thanks to his inimitable style and the power of television.

“My dad was the announcer for the first ESPN boxing show, and the first televised fights from the casinos in Atlantic City,” recalled Derian’s only son, Deron Ejdaharian. “His real job was as an auto-parts salesman, but most people knew him for his work as a ring announcer, which never really seemed like a job to him. It was something he truly enjoyed. He was so proud to be associated with boxing.”

Derian’s first experience as an announcer came as the voice of Roller Games, which was popular in the Philadelphia area in the late 1960s and early ’70s. Frank Gelb, a longtime associate of Top Rank founder Bob Arum who staged many of Top Rank’s fight cards on the East Coast, liked Derian’s work and recruited him to announce boxing matches in Atlantic City.

It was a pairing that clicked immediately, so much so that Philadelphia-based boxing promoter J Russell Peltz knew he wanted Derian to be the ring announcer for all his cards, many of which were beamed throughout the nation from the Blue Horizon in North Philly.

“In Pennsylvania, for a long time the promoter didn’t have the right to name the ring announcer,” Peltz recalled. “That person was always appointed by the (state athletic) commission. But I always wanted Eddie; nobody else was close to him. I tried to get him for every show I did. And when Atlantic City got the casinos and so much into boxing, he was the man. I think he did all the Top Rank shows on the East Coast for ESPN.”

Derian had his pet phrases, as most ring announcers now do, which Peltz did not always find as endearing as did audiences at the Blue Horizon and elsewhere. But Derian was who he was, and he stuck with what he knew and what he felt worked best for him.

“I’m a traditionalist who likes to stick to the basics,” Peltz said. “I used to tell Eddie to cut down on the shtick. I’d say, ‘Eddie, guys don’t hit the scales. They weigh whatever they weigh. A fighter doesn’t hit the scales at 143 (pounds); he weighs 143. But that was part of Eddie’s style. He’d say, ‘This fine gentleman comes to us from – ‘Eddie was the ring announcer who started all that stuff.”

Jimmy Lennon Jr., the longtime ring announcer for Showtime Championship Boxing, is the son of a southern California announcing legend, Jimmy Lennon Sr. He counts himself as an admirer of Derian, who always entered the ring immaculately decked out in one of the several tuxedos he owned.

“I was certainly aware of his work and appreciated him very much,” said Lennon, who was inducted into the International Boxing Hall of Fame in 2013. “He was announcing during the time when I went to the next level of my interest in boxing, from watching it to watching my dad more carefully and then considering (announcing) myself. He had a unique style, where he would repeat the fighter’s name after saying it the first time. He was always fun to listen to.

“I did know him personally, but not well. A number of times our paths did cross. He was always very nice and always a gentleman. I wondered what happened when, rather suddenly, he was not seen as much.”

What happened is that Derian’s wife of 47 years, Roxy, died on Oct. 6, 2012, leaving a hole in her husband’s heart that never could be completely filled in. He also found it difficult to climb steps and enter the ring after having both hips surgically replaced. His right leg was amputated above the knee on Sept. 4, which served to accelerate his decline. But his physical health issues paled in comparison to his loss of mental acuity after he was diagnosed with dementia, which obliged Peltz to make the difficult decision to part ways, in a professional sense, with one of his dearest friends.

“Eddie was a wonderful guy, and I stuck with him probably longer than anybody until he just couldn’t do what he had always done so well,” Peltz said.

Charles Brewer, the former IBF super middleweight champion, said he and other fighters always enjoyed being introduced by Derian.

“Ed was a cool dude,” Brewer said. “He had this wry sense of humor, you know? I hadn’t seen or heard anything about him in a while, and now I know why. I had no idea he was that sick.”