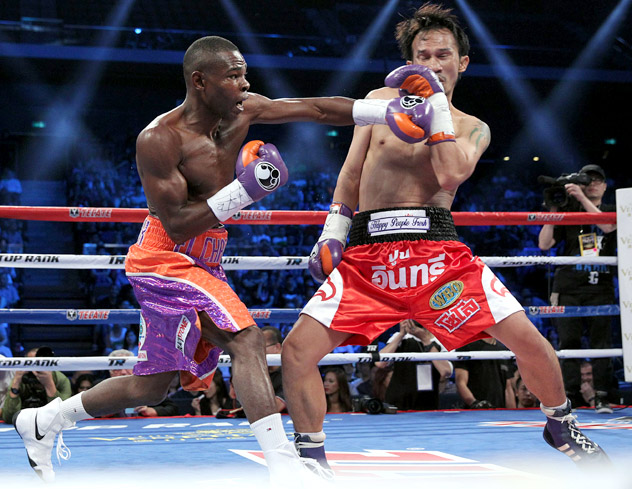 The handlers of RING junior featherweight champion Guillermo Rigondeaux are pursuing a defense against RING No. 3-rated 122-pounder Scott Quigg since Chris Avalos has declined a mandatory shot at Rigondeaux’s WBO title.

Caribe Promotions won the WBO’s Sept. 19 purse bid for the right to promote Rigondeaux-Avalos and had planned to hold the bout on Nov. 22 in either either Miami or the Dominican Republic.

To that end, Pat English, an attorney working on behalf of Rigondeaux and his manager, Gary Hyde, has requested mutual blessings of the WBA and WBO for Rigondeaux to face Quigg.

“Rigondeaux is the ‘super champion’ and we’ve asked the WBA about it. Their WBA mandatory is overdue. Given the fact that Avalos has backed out, we’ve asked the WBA to go forward with that mandatory. I would think that they would go with it. Otherwise, what else are we going to do?” stated English.

“We’d like to coordinate that through the two organizations. I did write a letter to [WBO President] Paco [Valcarcel] and I spoke to [WBA Vice President] Gilberto Mendoza Jr. and I wrote him an email also based upon my conversation with him. So that’s where it stands. Whether or not Quigg will back out, I can’t tell you. I don’t know.”

Hyde spoke to RingTV.com from Santa Monica, Calif., where he is with Hassan N’Dam N’Jikam in advance of Wednesday’s IBF middleweight title eliminator bout against Curtis Stevens at the Barker Hangar.

“I’m here with N’Dam and we have the weigh-in today. But once we get beyond that, I will try to get in touch with Eddie Hearn some time next week,” said Hyde. “I’m sure that the WBA will ask us to begin negotiations. At this point, though, I haven’t yet reached out.”

Rigondeaux, 34, was last in action for a first round knockout of Sod Kokietgym on a Top Rank Promotions card in Macao, China in July. Rigondeaux ended a 36-0-1 unbeaten streak for Kokietgym and was coming off consecutive unanimous decisions over Nonito Donaire in April 2013 and Joseph Agbeko in December.

Rigondeaux won the RING and WBO titles against Donaire and the WBA title against Rico Ramos in January 2012 in his ninth pro bout.

Quigg, 25, is 8-0-2 with eight knockouts in his past 10 fights and was last in action for a third round stoppage of Stephane Jamoye on Sept. 13.

Middleweight Tyrone Brunson (22-2-1, 21 KOs) will face Decarlo Perez (12-3-1, 4 KOs) in support of an Oct. 18 main event between heavyweights Steve Cunningham and Natu Visinia on NBC Sports Network. The card will be broadcast from the 2300 Club in Cunningham’s native Philadelphia, according to a release by Main Events matchmaker J. Russell Peltz.

Douglass battled to a draw with former title challenger Michel Soro in his last fight in July.

In the co-feature, featherweight Jorge Diaz will face Jose Haro.

Hammer-fisted lightweight Ismael Barroso (15-0-2, 14 KOs), a 31-year-old southpaw from Venezuela, has signed with promoter Greg Cohen, it was announced on Monday.

“This is a fighter who could easily become a world champion,” said Cohen of Barroso, a winner of his past six fights by stoppage. “He’s got tremendous punching power and he’s relentless when he has an opponent hurt. I’m very proud to be working with him.”

Barroso was last in action for a second round knockout of Luis Ernesto Jose in December.

“We’re eager to get to work on finding him the opportunities that will bring him to the top of the division,” said Cohen. “We will have an exciting announcement about the first of those opportunities very soon.”