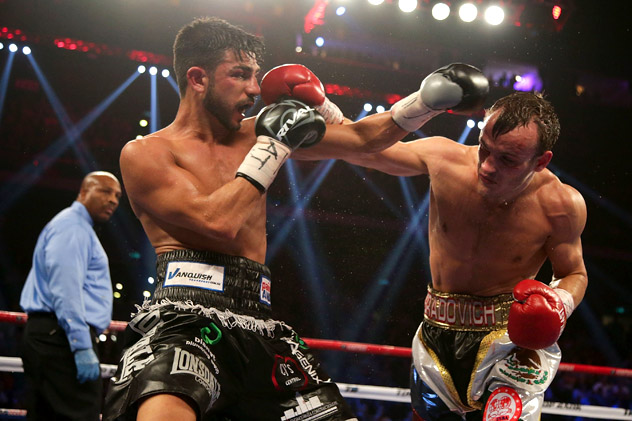 Top Rank Promotions CEO Bob Arum informed RingTV.com of the bout prior to Tuesday’s scheduled announcement of the Crawford bout at a press conference in Omaha.

“We’re going to announce today, the second fight, which is the featherweight championship for the IBF, and that’s between Gradovich and Velez,” said Arum, during a telephone conversation from Omaha. “The Puerto Rican is a very good fighter. That should be a very good, complementary fight for what should be an outstanding program at a sold-out arena.”

Gradovich (19-0, 9 knockouts) was last in action for a unanimous decision over Alexander Miskirtchian in May that followed his ninth round stoppage of former titleholder Billy Dib in November.

Gradovich, 28, won his belt by split-decision over Dib in March 2013 and made his first defense with a unanimous decision over Mauricio Javier Munoz in July 2013.

Velez (22-0, 16 KOs), 26, is coming off a second round knockout of Miguel Soto in April and has been “tentatively approved” by the IBF to face Gradovich, according to the organization’s Championships Chairman, Lindsey Tucker.

“Once we get the signed contracts, then we’ll give the formal approval. But we did get the request last week for that fight from [Top Rank Vice President] Carl Moretti,” said Tucker. “Since Gradovich is in an optional period, then he can fight anybody that is in our Top 15.”

In facing Beltran at the CenturyLink in his native Omaha, Crawford is returning to the site where he scored a ninth round technical knockout victory over former featherweight beltholder Yuriorkis Gamboa before 10,943 of his partisan fans in June.