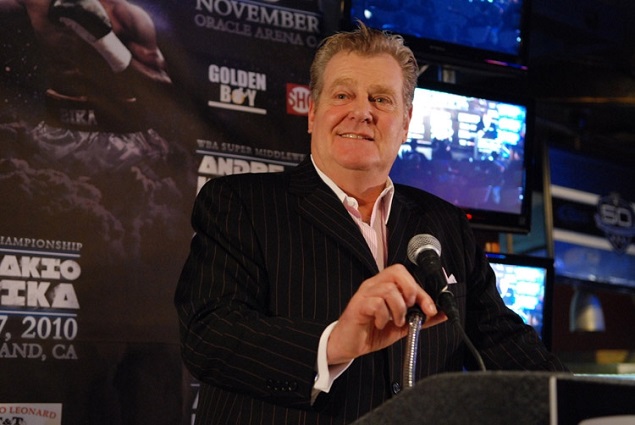 Dan Goossen, president of Goossen Promotions, has died of complications from liver cancer, according to a statement released from his family on Monday.

Goossen was pronounced at 3 a.m., according to publicist Fred Sternburg.

“It is with overwhelming regret that we announce the passing of Dan Goossen, 64, from complications relating to liver cancer. The sudden news of his diagnosis was very much a private matter and his final days were spent surrounded by his family and closest friends,” read the statement.

“Sadness is difficult to escape as we grieve his passing; however, we are filled with pride by the fact that Dan Goossen battled this aggressive illness with boundless strength and the last days of his life were fought and lived with unflinching bravery, pure love and grace beyond measure.”

Arrangements are pending and details will be announced in the next few days, according to the statement.

Goossen was a driving force behind Showtime’s “Super Six” super middleweight tournament from 2009 through 2011 and is the promoter of its eventual champion, Andre Ward.

HBO Sports President Ken Hershman was in charge at Showtime for the Super Six.

“Everyone at HBO Sports is saddened by the sudden loss of Dan Goossen. Dan was a dedicated boxing promoter who we worked closely with for many, many years on some of the most important fights in the sport,” said Hershman, in a statement from HBO.

“But what was even more impressive was his total commitment to his family, who were always right by his side during fight week or wherever his business required him to be. Our prayers and thoughts are with his wife, Debbie and the entire Goossen family.”

“I’ve met his wife and I’ve met his entire family over the years. Through it all, he never lost focus on what’s truly important in life and where your priorities really lie and Dan’s biggest priority, first and foremost, was always with his family. That was just a fact,” said DiBella, who called Goossen, “The Goose.”

“All promoters have run-ins but with Dan and I, even our run-ins were with amusement and humor. Even when we disagreed on things, it was always in a friendly way. He was always the kind of guy that you looked forward to talking to. I enjoyed talking to him. There just aren’t that many guys like him left in the game.”

Goossen also guided the careers of the Ruelas brothers, Rafael and Gabriel.

“I’m sort of numb right now. I’m going through his pictures. I know that it’s crazy and I know that it has happened but I still don’t believe it. I want to keep it that way to myself. I want to keep him alive in my memory,” said Gabriel Ruelas, 44, adding that he and Rafael had been visiting Goossen regularly over the past few weeks.

“I just saw him a couple of days ago. He’s such a great person. Maybe it will take a while to hit me, I guess, or something. But I just can’t believe it. I want to think of him as still being here. I used to tell my kids that when I die, I want them to think of me that way also. Just pretend like I’m away.”

Gabriel Ruelas said he and his brother arrived in America from Mexico in 1978 at ages seven and eight, having never worn a pair of shoes.

The siblings had worked the entirety of their young lives rather than attending school with their primary source of income being the door-to-door selling of candy in Southern California.

Their lives changed when Gabriel stopped to make a sale at a neighborhood gym, spotted the boxing equipment, and asked Joe Goossen if he could teach him the sport.

A statement from Stephen Espinoza, on behalf of SHOWTIME Sports:

“All of us at Showtime are deeply saddened by the passing of Dan Goossen. This news has come as a shock to many of us who knew Dan personally, beyond our collaborative work on boxing events, for decades. We will remember Dan as a passionate advocate for the sport of boxing, a fun-loving colleague and friend, and, above all, a devoutly religious family man. Our deepest sympathies to the entire Goossen family. May he rest in peace.”

A statement from Andre Ward on the Passing of Dan Goossen:

“I was deeply saddened to learn the news of Dan Goossen’s passing early this morning. My thoughts and prayers have been with Dan and his family since I received the news of his illness last week,” said Ward.

“While Dan and I recently had our professional struggles, he was a great man, father and husband. He will be greatly missed by the boxing community. I will continue to keep the Goossen family in my prayers.”

“Dan was as passionate and hard-working as any promoter in the industry. He promoted many world champions over a long and distinguished career and nobody was more natural and entertaining hosting a press conference than Dan, as his wit and humor were unparalleled in that setting.

“More importantly, Dan was the ultimate family man, a great husband, dad and grandfather. On a personal level, Dan was always kind and caring to my family and for which I am forever grateful.”

“It is with great sadness and regret that the BWAA acknowledges the passing of boxing promoter Dan Goossen. Goossen, 64, passed away following a private battle with cancer. A larger-than-life personality, Goossen was as known for his colorful suits as he was for the decades worth of high-profile fights that he promoted.

“He worked with everyone from Gabriel and Rafael Ruelas to Michael Nunn and Terry Norris to current super middleweight champion Andre Ward. The thoughts and condolences of the BWAA are with the Goossen family at this time.”

“Dan Goossen was an absolute titan in the boxing industry and a great friend to ESPN. He was the mastermind behind bringing the WBC World Heavyweight Championship bout between Bermane Stiverne and Chris Arreola to the masses via ESPN back in May. He will be sorely missed.”