Orlando Salido: ‘I fight the fights that people get excited about’ 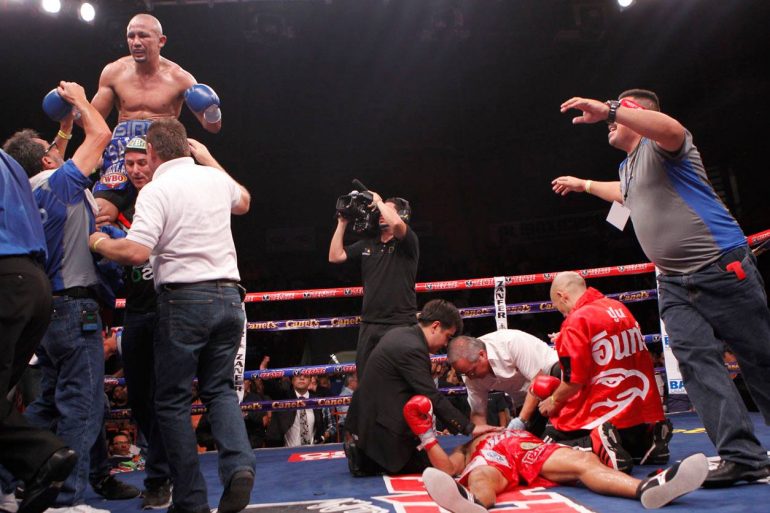 Despite being dropped once each in the first, second and fifth rounds of an 11th round stoppage victory over Terdsak Kokietgym last Saturday, Orlando Salido never once thought of retreating into a defensive mode in his junior lightweight debut.

“My last fight was difficult but thanks to my training, I was able to rise to the moment,” said Salido (42-12-2, 29 knockouts) of his triumph against Kokietgym (53-5-1, 33 KOs) in a sensational, seven-knockdown brawl in Tijuana, Baja California, Mexico.

“Every time I go into the ring, people want to see excitement. They want to see entertainment, so I fight the fights that people get excited about. I just like to go forward and throw punches and I know that if the opponent is thinking the same way that I’m thinking, then it’s going to turn into a great fight.”

Salido, 33, floored Kokietgym in the first, second, seventh and final rounds, the last time before referee Eddie Claudio waved an end to the bout at the 16-second mark of the 11th.

Salido’s win over Kokietgym in his 130-pound debut represented his third consecutive victory since January 2013, when he was dethroned as WBO 126-pound beltholder following an eighth round technical decision loss to Mikey Garcia.

“I fought stronger guys as a featherweight than [Kokietgym,] who I thought was going to be more of a mover,” said Salido.

“My opponent caught me a couple of times at the right moment, so I went down but I was never hurt. He surprised me with his power; no doubt about it but I felt that even though I was getting knocked down, they were flash knockdowns.”

In his previous fight in March, Salido won a split decision over Vasyl Lomachenko, this despite having already lost his WBO featherweight title on the scales due to being overweight prior to bout.

“I would love to fight Mikey Garcia or any of the other champions and unify the crowns but I don’t pick my opponents,” said Salido of Garcia, THE RING’s No. 2-ranked 130-pounder and the WBO titleholder. “I’m the interim champion, so I’m very happy at the moment but I’m also looking forward to whatever’s next.”

Orlando Salido: ‘I can still fight’