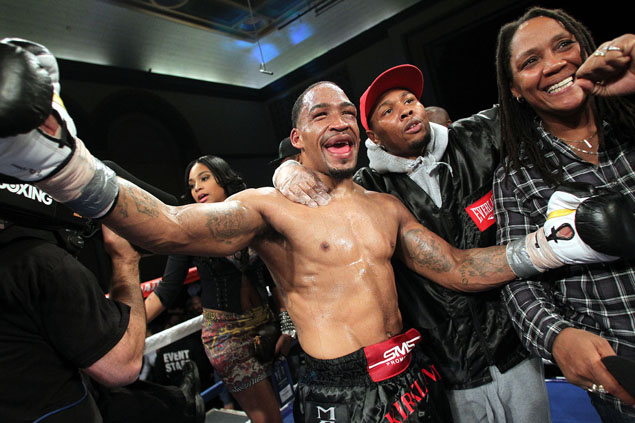 While attending the Sept. 12 weigh-in at the MGM Grand in Las Vegas for the following day’s Floyd Mayweather Jr.-Marcos Maidana rematch, James Kirkland verbally agreed to face Gabriel Rosado at a catchweight of 157 pounds, according to Kirkland’s manager, Michael Miller.

Kirkland-Rosado was to be hosted at Boardwalk Hall in Atlantic City in support of the Nov. 8 light heavyweight unification bout featuring IBF and WBA titleholder Bernard Hopkins and WBO counterpart Sergey Kovalev on HBO, said Miller.

“Last Thursday. I was in Vegas for the Angulo fight on that Mayweather card, and that Friday at the weigh-in James committed to the fight with Rosado,” said Miller, who also manages Alfredo Angulo, who lost to James De La Rosa on the Mayweather-Maidana undercard. “So a deal is a deal as far as I’m concerned. But then, on Thursday of last week, we’re still waiting for the contract.”

On Sept. 18, Miller got a different answer from Kirkland, who he said declined the Rosado fight over a purse dispute with promoter and rapper Curtis Jackson (aka 50 Cent). according to Yahoo!Sports.

“So, last Thursday, James called and said he didn’t want the fight. He said that there wouldn’t be enough time to prepare,” said Miller. “We even got HBO to actually move the fight to December, take him off of the Hopkins card and to put him on a card in December if that would help. But then, he turned that down also.”

Kirkland could not be reached for an immediate comment.

The move continued in what Miller characterized as a “frustrating” and “unpredictable” trend with Kirkland (32-1, 28 knockouts), a hard-hitting 30-year-old from Austin, Texas.

In June 2012, Kirkland pulled out of a shot at Saul Alvarez, then the WBC junior middleweight titleholder, after having agreed to replace Paul Williams following Williams’ career-ending injury from a motorcycle accident.

Kirkland cited purse issues and later, his belief that he still had not fully recovered from shoulder surgery to repair tears in his right arm during his win over Carlos Molina in March of 2012.

Kirkland signed with Curtis Jackson in October 2013. In March, Miller said a judge upheld his contract with Kirkland and since then, all parties had decided to work together.

Coming off last December’s sixth round knockout of previously unbeaten Glen Tapia that followed the Molina bout, a 10th round disqualification victory, Kirkland appeared to be on a roll that looked to continue with Rosado.

“It’s frustrating,” said Miller. “We had a deal,and then, he decided he didn’t want the fight.”

Miller quashed speculation that Kirkland is angling for a December clash with Alvarez (44-1-1, 31 KOs), 24, who is coming off July’s split decision win over Erislandy Lara at 155 pounds and had signed a long-term commitment with HBO on Tuesday.

“That’s not going to happen. Not with these kinds of actions. He’s unpredictable. It’s frustrating because he’s burning bridges,” said Miller. “As much as I like him and as much as I want the best for him, there are entities that are going to stop giving him these great opportunities if he continues to slam the door in their faces. That’s the truth.”

In July, Miller and Golden Boy began discussing potential fights for Kirkland, including one against Alvarez “after the Canelo-Lara fight,” said Miller. Asked at the time if Kirkland was being considered for Alvarez, Golden Boy President Oscar De La Hoya said, “Absolutely.”

Kirkland has also had a troubled career, having served two separate jail terms. Kirkland did over a year in prison for robbery after having gone 11-0 as a professional, fighting under a contract he signed with Duva Boxing when he was 17. But the Duvas dropped Kirkland when he was found guilty of robbing a man coming out of a convenience store in 2003.

Kirkland was released from Bastrop Federal Prison in Texas in September 2010 after having pleaded guilty to a charge of gun possession in April 2009. Before beginning his senternce, Kirkland had scored an eighth round knockout of Bryan Vera in November 2008 as well as a sixth round stoppage over Joel Julio in March 2009.

Kirkland had been in line to face Michael Walker for a title shot at either Sergiy Dzinziruk or Daniel Santos, who then represented the WBO and WBA, respectively.

Then, 26, Kirkland still was unbeaten at 25-0 with 22 knockouts when he was relocated from Austin and paired with Las Vegas-based Kenny Adams rather than Wolfe.

Kirkland scored consecutive first and second round knockouts before being matched with Nobuhiro Ishida. After losing to Ishida, Kirkland reunited with Wolfe and reeled off two consecutive knockouts to set up the redemptive bout against Angulo.

“Now he hasn’t even reached out to Ann. He wasn’t training with Ann. She’s just as frustrated as everyone else. He was getting in shape with a personal trainer here in San Antonio actually,” said Miller.

“So he hasn’t contacted Ann yet but she was ready, willing and able to help him. We all want the best for him and we want a good deal for him. So we hope that he fights soon. We just have to figure out what he’s doing to do.”