Nonito Donaire Jr. has a lot left in the tank, says father-trainer 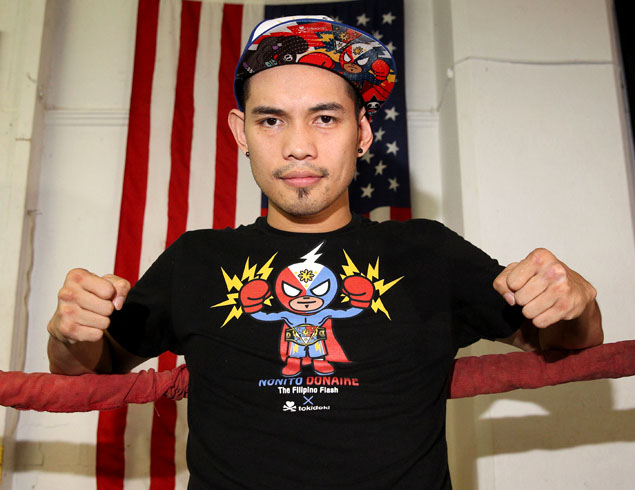 He saw it in the third round of his last fight, but what it was he won’t say. Nonito Donaire Sr., the father and trainer of WBA featherweight titleholder Nonito Donaire Jr., knows his son’s style better than anyone else.

In recent fights, Donaire Sr. says that something has been missing, and since resuming head trainer duties two fights ago, he’s been on a mission to rejuvenate the four-division titleholder’s style.

“He did it a few seconds in the third and then stopped doing it,” Donaire Sr. told RingTV.com, referring to his son’s fifth-round technical decision win over Simpiwe Vetyeka earlier this year.

“I won’t say it right now what was missing from his old style. I want to surprise everybody if Junior will really do what we are [working on] in the gym.”

Donaire Jr. (33-2, 21 knockouts) has defeated Vic Darchinyan and Vetyeka in successive fights since reuniting with his father a year ago after working primarily with reigning BWAA Trainer of the Year Robert Garcia. Donaire Sr. concedes that the transition process hasn’t always gone smoothly, saying that injuries had hampered recent training camps.

Before the Darchinyan fight, Donaire Sr. says the first two weeks of camp were great until a sparring partner stepped on his son’s foot and caused him to injure a calf muscle. Prior to the Vetyeka fight, he says Donaire Jr. had hurt his elbow and hips.

For his next fight, a showdown with unbeaten Jamaican contender Nicholas Walters (24-0, 20 KOs) on Oct.18 at the StubHub Center in Carson, Calif. in the HBO televised co-featured bout underneath the Gennady Golovkin-Marco Antonio Rubio WBA middleweight title fight, Donaire won’t be able to afford any pre-fight injuries.

Walters, who knocked out Darchinyan in May on the undercard of Donaire’s fight with Vetyeka, is rated a spot above Donaire in THE RING’s featherweight rankings at No. 3 and is perhaps the most dangerous fight Donaire could’ve chosen at this weight.

Walters, 28, of Montego Bay, Jamaica, has knocked out his past four opponents and is a committed body puncher with power in both hands. Like Donaire, Walters is a second generation boxer, the son of Job Walters, a New York-based featherweight during the late 1980s and early ’90s who amassed a record of 12-7 (3 KOs) according to Boxrec, losing to future champions John-John Molina, Rafael Ruelas and Kevin Kelley while holding a first-round knockout victory over title contender Wilson Rodriguez, who earned hardcore fame with his memorable war with Arturo Gatti.

When asked why Donaire Jr. chose to face one of the division’s most feared up-and-coming contenders, Donaire Sr. theorized: “I think nobody will fight him for small money.

“Only one thing: avoid his big punches,” Donaire Sr. said of the task ahead. “And I know he has good defense but Nonito’s speed will make offense.”

This camp, Donaire Sr. says, has been far better than the two previous ones. He began sparring 12 rounds last Friday with Guy Robb, a 14-1 (6 KOs) featherweight from Sacramento, plus Jesus Sandoval (3-3-3) from Redwood City, California.

“So far he is doing great. I could say right now he is 90 percent and we still have a month to train. He’s sparring two guys every time. And I’m still praying that no more injuries. Even if it’s minor, but still, it still hampers his ability to move. But I know Junior, he pushes himself up.

“He still has a lot left in his tank.”