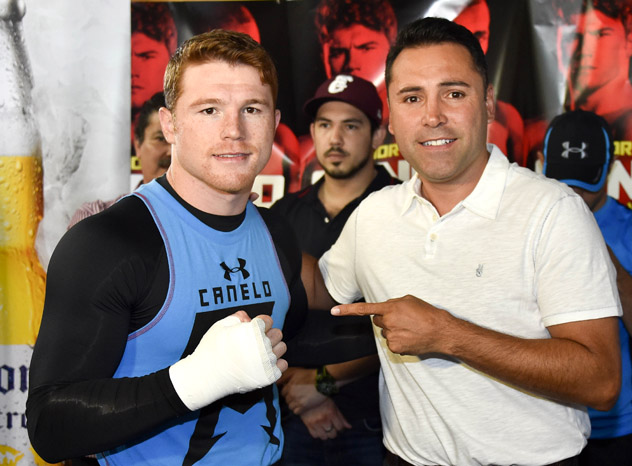 Oscar De La Hoya says has his “marching orders” from Canelo Alvarez, chief among them being the 24-year-old Mexican’s desire to fight on the weekends of Mexican holidays Cinco de Mayo and Mexican Independence Day in May and September.

A major conflict, however, has been that Floyd Mayweather Jr. traditionally competes on those dates.

Starting with his 2007 split decision victory over De La Hoya, Mayweather has fought in May, taking out Shane Mosley in 2010, Miguel Cotto in 2012 and Robert Guerrero in 2013 by decision on Cinco de Mayo weekends.

Beginning with his 2009 unanimous decision over Juan Manuel Marquez, Mayweather has competed in September, following that up with a fourth-round stoppage of Victor Ortiz in 2011 and the win over Alvarez.

During a Wednesday conference call announcing his exodus from Showtime in favor of “long-term commitment with HBO,” both Alvarez and De La Hoya reiterated their intentions of challenging Mayweather for those slots.

“Canelo Alvarez gave me my marching orders, and that is fighting in May of next year and in September of next year. So, as his promoter, I have to do whatever I can to make that happen for him,” said De La Hoya of Alvarez, whose new deal calls for his fighting on regular HBO in addition to its pay per view.

“So, the great thing is about this relationship with HBO, and this is coming from Canelo, is that he will not only be fighting on pay per view, but he will be fighting on HBO live, which he wants to do for his fans. A fighter of his caliber and at his level, you just don’t see that in today’s world. This is just another indication of how he cares about his fans.”

Supplanted by Mayweather, Alvarez’s last three victories were by unanimous decision over Austin Trout in April 2013, 10th-round stoppage of Alfredo Angulo in March, and by split-decision over Erislandy Lara in July.

“Obviously, those two dates are very important. They’re Mexican dates. I want to recoup that,” said Alvarez. “I want to recuperate those dates and take them back to the Mexican people. There should always be a Mexican fighting on those dates…I’ve always wanted to fight on Cinco De Mayo and on Sept. 16.

“With me being a Mexican National, those are the dates that I’ve always celebrated and the dates that my countrymen have celebrated. So I’m excited that I can now finally fulfill my dreams of continuing that tradition that many great fighters laid out. That plan and that tradition is to fight on May 5 and in September. So I’m excited to give the fans what they want to see.”

De La Hoya said he’s ready to dig in for a fight against Mayweather and Showtime for the dates.

“Look, obviously it all depends on who Canelo is fighting, and if Canelo is asking me that he wants May, then I’m going to get him May,” said De La Hoya. “Will I have to fight for it? Well, I wasn’t a 10-time champion for nothing, so I work for the fighter, and I’m going to have to grant Canelo’s wish.”

WILL ALVAREZ BE FIGHTING ON DEC. 6?

During the call, a San Antonio-based reporter stated that there was “no available venue” for Dec. 6 in San Antonio, prompting De La Hoya to respond that he would try to come up with “something concrete” next week.

WHAT ABOUT MANNY PACQUIAO AND MIGUEL COTTO?

With Manny Pacquiao and Miguel Cotto having recently fought on HBO pay per view, Alvarez believes that his chances of facing one of them has been increased.

“Obviously, those are the names,” said Alvarez. “Those are the guys that I would like to fight. Those possibilities are enhanced, now, being with HBO.”

IS JAMES KIRKLAND IN THE RUNNING FOR CANELO?

Given that James Kirkland recently turned down a planned junior middleweight bout against Gabriel Rosado, De La Hoya was asked if the southpaw was a consideration to be Alvarez’s next opponent.