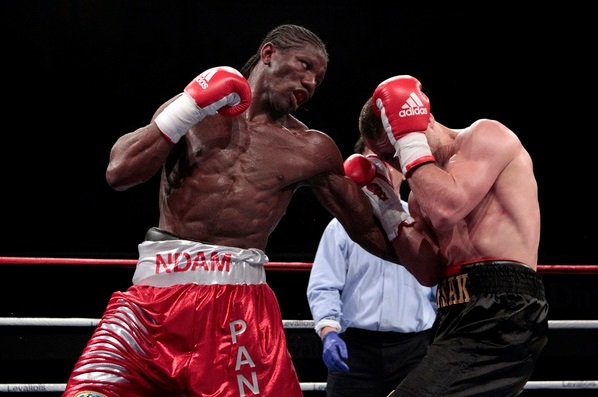 Curtis Stevens “has the right style for me to shine” said former WBO titleholder Hassan N’Dam N’Jikam in advance of his middleweight bout against Stevens at the Barker Hangar in Santa Monica, Calif., on Oct. 1.

“Curtis Stevens comes straight at you and tries to fight you,” said N’Jikam, 30, who is returning to the site of a unanimous decision over Fulgencio Zuniga in his last fight in April.

“Curtis Stevens really has the right style for me to shine. I’m a fighter who uses my legs a lot. I am one of the most technical middleweight fighters out there.”

N’Jikam’s promoter, Michael King of King Sports World, won the purse bid for the right to promote the fight, an IBF middleweight eliminator bout for the right to face beltholder Sam Soliman.

N’Jikam bounced back from the loss to Quillin with a unanimous decision over Anthony Fitzgerald in December 2013 followed by a fourth round stoppage of Ricardo Marcelo Ramallo in February before facing Zuniga.

Against Quillin, N’Jikam was dropped twice each in the fourth, sixth and 12th rounds but said he was not at 100 percent entering the fight.

“I have an exlpanation as to why I lost to Quillin. Under normal circumstances, I would not have lost to Quillin but there were some problems that were there and that’s why I lost. In the weeks before the fight, I had six surgeries in my mouth because there was an infection,” said N’Jikam, who is trained by Mustapha Ouicher.

“I was put to sleep and my promoter back then told me about the fight a month ahead of time and I only had one week of real training before the fight…even in the worst conditions, I never stopped fighting and I was not knocked out. I continued until the end. Quillin knows that if I were in better condition, that I would have knocked out Peter Quillin.”

N’Jikam said he learned a lot about himself during the Quillin fight.

“That was my first big fight in the U.S., so there was a lot of pressure on me,” said N’Jikam. “What I learned about myself and what the Americans learned is that I have great qualities to be a successful draw in the U.S. I didn’t necessarily know that before fighting Peter Quillin.”

Unlike Quillin, who stands 5-foot-11, Stevens stands 5-7, presenting what N’Jikam considers to be a physical advantage in his favor.

“Curtis Stevens is smaller than Peter Quillin and it’s easier to fight with someone who is shorter than me than someone who is taller or my same height,” said N’Jikam, who is 5-11.

Note: Translated by Marco La Via