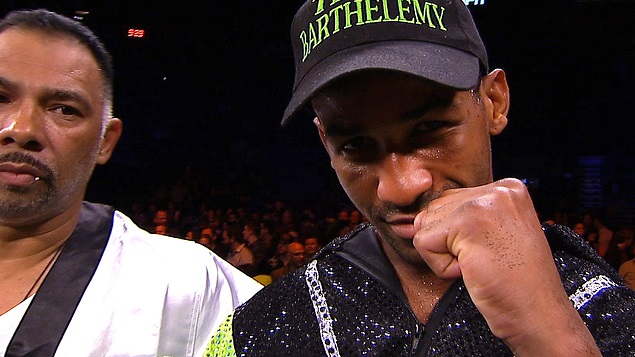 The show, billed as a Showtime Boxing “Special Edition,” is co-promoted by DiBella Entertainment and Warriors Boxing.

Barthelemy (20-0, 12 knockouts) is coming off back-to-back fights with former IBF beltholder Argenis Mendez. Their first bout, in January, was ruled a no decision after Barthelemy, a Miami, Florida-based Cuban, knocked Mendez out with a punch that landed a second or two after the bell ending Round 2. Barthelemy dominated Mendez to a 12-round unanimous decision in their rematch in July, earning the IBF title he thought he won at the start of the year.

Dawson (32-3, 18 KOs), who is one bout removed from back-to-back stoppage losses to super middleweight champ Andre Ward and to Adonis Stevenson, who dethroned him with a one-punch first-round KO last year, is fighting in his home state for the first time in five years.

“It means a lot to me to be back fighting in front of my hometown fans, to be back on the East Coast and not in enemy territory,” Dawson stated in a press release send out on Monday. “I’m looking forward to putting on a great performance in front of my fans, friends and family in attendance.”

The choice of Karpency, a game but limited club fighter from Adah, Pennsylvania, as Dawson’s opponent is not a popular one among hardcore fans, who voiced their displeasure – along with a few high-profile boxing writers – on social media when the Showtime-televised 10-round light heavyweight contest was announced on Monday.

Since dropping a shutout decision to then-WBO titleholder Nathan Cleverly and suffering a seventh-round TKO to top-10 contender Andrzej Fonfara in 2012, Karpency (23-4-1, 14 KOs) has won two bouts against journeymen. One of his victories, in January against 23-21-2 Rayco Saunders, avenged a previous defeat.

“I’ve watched my opponent, Tommy Karpency, and I know he’s a hungry guy,” Dawson said. “He won’t be in there just for a paycheck, but I am prepared for whatever he brings.”