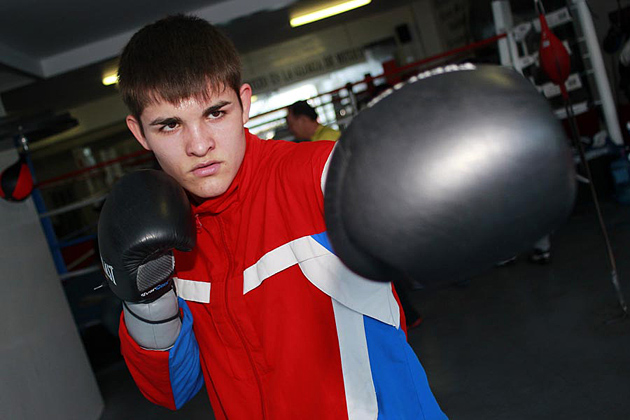 PHOENIX – He’s unbeaten and unknown. Mostly, Konstantin Ponomarev is hard to figure out.

Ponomarev (25-0, 12 knockouts) moved on his feet, moved from southpaw to right-hand leads and back, landed solid shots with both hands from the outside and seemed to confuse Rivera from start finish throughout the UniMas-televised bout at Celebrity Theatre.

Ponomarev proved to be a lot of things in scoring a 100-90, 98-92, 100-90 victory on the scorecards. He had some Mikhail Baryshnikov in his agile feet. Despite a baby face, he had some Vladimir Putin in his eyes. After the fifth round, he looked at Rivera the way cameras have caught Putin looking at President Obama. There was no disguise for the contempt. Then again, there was also no way to hide that Rivera had no chance. Maybe a younger Rivera would have. But at 38-years-old and with a record of 59 fights (37-19-3, 26 KOs), there was just too much wear-and tear for Rivera to have any shot at upsetting the latest young lion in a Russian invasion.

The Rivera who lost to Judah in 2005 and Angulo in 2009 might have been able to take advantage of another element in the many sides to Panomarev. His defense is the Roy Jones Jr. model. Translation: He keeps his hands down while moving his head in-and-out, side-to-side. His feet allow him to maintain a dance that keeps him out of harm’s way, at least from an older fighter. Against a younger fighter, he might not be so hard to figure out.

Two other Eastern Europeans, both trained by Robert Garcia, were impressive on a card staged by Top Rank in a partnership with Iron Boy Promotions of Phoenix. Ukrainian Oleksandr Gvozdyk (3-0, 2 KOs), a bronze medalist at the 2012 London Olympics, knocked out Lamont Williams (5-6-1, 2 KOs) with a crushing right hand at 1:38 of the fifth round. Lithuanian welterweight Egididjus Kavaliauskas (8-0, 7 KOs) , a two-time Olympian, scored three knockdowns for a first-round TKO of Eduardo Flores (17-15-3, 12 KOs) of Ecuador.

“Both are very, very disciplined,” said Garcia, who also said that both Gvozydk and Kavaliauskas are living with their families near his gym in Oxnard, Calif. “They’ll succeed because of that discipline. They are on a mission to accomplish something in the United States.”

Best of the undercard: Victor Castro, a Phoenix lightweight, had former super-bantamweight great Israel Vazquez in his corner and perfect timing in his left hand. Pablo Becerra never had a chance. Castro (12-0, 6 KOs), who has been training under Vazquez’ guidance for the last several weeks, rocked Becerra (7-6, 6 KOs) with a succession of straight shots during the third round’s final minute. Then in the round’s final moments, he landed a left hook, as wicked as it was beautiful. It lifted Becerra off his feet and onto his back. Becerra appeared to be unconscious before he hit the canvas in a devastating knockout at 2:59 of the third.

“It’s an honor to to have somebody like Israel training me,” Castro said. “It’s about confidence. He gives me that confidence.”