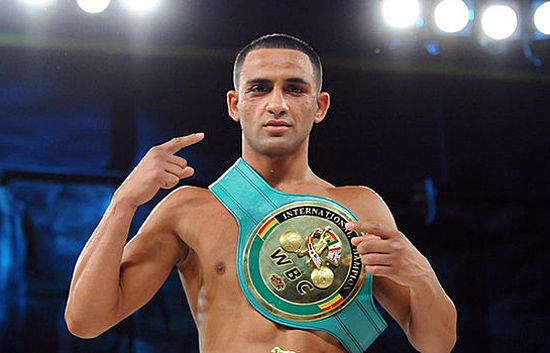 The official scorecards were 120-105, 119-107 and a laughable 117-109. RingTV.com gave Galahad every one of the twelve completed sessions and not one of them was close. There were two right hand knockdowns, one of which came at the end of Round 1 and the second, an impeccable counter, deposited Dos Santos on the canvas in the tenth.

“I took him apart from the opening bell” said Galahad, when interviewed by Channel 5 in the UK. “In terms of the punishment I dished out, he was definitely the toughest opponent I’ve faced and I actually hurt my hand in the second round.”

Just touching Galahad, far less landing flush, is difficult enough and that pattern was set in the opening session as Dos Santos was made to miss frequently by his opponent’s defensive sophistication. The proverbial box of tricks, Galahad was switch hitting and gliding around the ring when a one two suddenly decked the visitor who was saved by the bell.

Nothing changed throughout the early rounds and a sharp combination rocked Dos Santos again in the third. The Brazilian bravely fired back but his punches cut holes through the air as Galahad stepped out of range and fired home sharp counters. At this point it seemed unlikely that the fight could ever go the full 12 rounds.

Still, from this point onwards, the bout took on the feel of a glorified exhibition and Dos Santos merely adjusted, or became accustomed, to the punishment he was taking. Galahad (18-0, 9 knockouts) landed to head and body at will and, as the championship rounds approached, seemed almost bored of hitting the target.

Things livened up in the tenth when Dos Santos hit the floor again, and he did well to get up on this occasion. Galahad feinted, while on the back foot and, as his opponent lunged, found the point of his chin with a withering right which couldn’t have landed more cleanly.

The fight ended with a whimper, rather than a bang, and the scorecards were academic.

Galahad has already collected the triple at domestic level annexing British, Commonwealth and European titles inside an eight month period. He is unquestionably a world class operator who should be mentioned in the same breath as Carl Frampton and Scott Quigg, despite the fact that their own prospective showdown keeps him on the outside looking in.

“I’m ready for Scott Quigg right now,” said Galahad, who is 24 years of age. “And if Carl Frampton wants to fight on December 6 then I’ll be happy to take him on.”