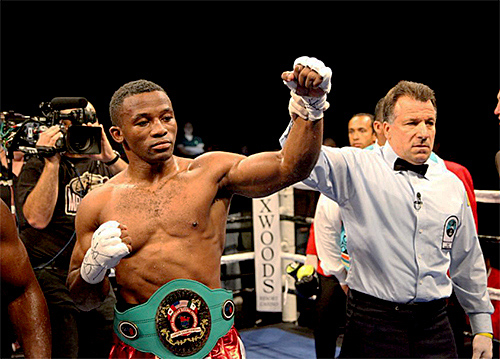 MASHANTUCKET, Connecticut – Thabiso Mchunu laughed at the question, pointing to a slightly plump left eye. The South African cruiserweight contender knew what he was getting into when he took on the game Garrett Wilson on Saturday afternoon in front of a national TV audience from Foxwoods Resort.

The decision was a rather academic 10-round decision for Mchunu (17-1, 11 knockouts) with winning scores of 99-90 from judge Glenn Feldman, 98-91 from Don Trella and somehow judge Clark Sammartino saw it much closer, 96-93.

“I knew he was going to give me a tough fight, and I knew it would be difficult and I had to give a total effort,” Mchunu said. “He hit me, but my defense was good as always. He was tougher than I expected, but I knew I had to save my energy for the later rounds. He is a veteran and he came to fight. He’s a pretty strong guy.”

Mchunu dominated the first five rounds. He threw 44 punches in the fifth, landing a variety of shots on Wilson (13-8-1, 7 KOs), a right hook that had the Philadelphian reeling, and a left inside that caused the squat gatekeeper to wince.

Mchunu was clearly in a comfort zone. Yet Wilson began crowding Mchunu at the outset of the sixth. Wilson did catch Mchunu with a right to the body, but the talented southpaw walked right through it, like he did everything it seemed Wilson threw.

In the last round, referee Arthur Mercante took a point from Mchunu for what he defined as excessive holding. No matter, Mchunu put his head down and burrowed back, clipping Wilson with a few body shots and riding out the final seconds of the fight.

“I wasn’t listening to my corner, that’s what it comes down to, and I paid for it,” Wilson said. “He is a tough guy. He’s also pretty fast. I hope he gives me a rematch.”

Now Mchunu wants to a chance at the big names of the cruiserweight class – and he just might have earned it. Not by winning stay-busy fights against a journeyman like Wilson, but his tenacity and style could be a fascinating matchup for titleholders such as Marco Huck or Yoan Pablo Hernandez.

In the co-feature, Philadelphia lightweight Karl Dargan had no concerns however tall Angino Perez was. Dargan was giving up close to 10 inches in reach to the lanky Perez, but in the end, Dargan was right. There were no worries.

Dargan (17-0, 9 KOs) stopped Perez (17-6, 15 KOs) at 1:32 in the fifth round, escaping some mild trouble late in the second round when he was trapped in the corner and then caught by a Perez right counter.

Within the first 30 seconds of the third, Dargan got a good taste of adversity when Perez dropped him. It was the first time Dargan was ever down as a professional. But Dargan was able to recover.

In the fifth, Dargan caught Perez with a looping right, which had Perez’ attention in the first minute of the round. About 20 seconds later, Dargan landed a textbook right uppercut right on the chin that put Perez down.

“I wasn’t worried,” Dargan said. “I knew I could come back. I needed to listen to my corner more. But what I proved today is something I always knew I could do. Everyone in boxing knows who I am and what I can do. I just had to show some boxing fans what I could do, and I did it on national TV.

“I felt real confident coming into this. I didn’t underestimate [Perez]. I knew he could punch, and those 14 knockoutsÔÇöthey’re real. I felt it. I know I could have done better with how sharp I was. I know I could look sharper, but overall, I can’t complain. I won, and I did it overcoming a little adversity.”

“I have some power, and he caught me with a good shot and I stayed with the plan,” Dargan said.

Then he pointed to the hat he was wearing, “I love haters,” emblazed across the front.

“I think I have something going for me now,” he said, smiling.