Garrett Wilson and the gatekeepers 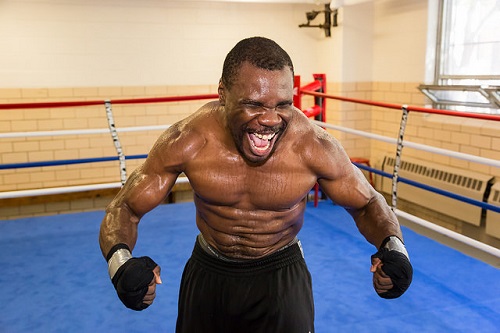 Thabiso Mchunu turned a lot of heads among hardcore fans in the U.S. when he outpointed former heavyweight title challenger Eddie Chambers in a 10-round cruiserweight bout televised on NBC Sports Net last August.

Mchunu (16-1, 11 knockouts) displayed superb skills and ring generalship as he befuddled Chambers, a savvy boxer himself. The one-sided victory shot Mchunu up the cruiserweight ratings, including a No. 8 spot in THE RING’s 200-pound rankings, and the 26-year-old South African already has his sights on the major titleholders of the division, but how good is he really?

Thabiso outpointed once-beaten Olanrewaju Durodola in his last bout in January, but the 33-year-old Nigerian had not faced a single a decent opponent.

So what if the Chambers fight was mirage? What if Chambers drained himself by dropping down from heavyweight, where he usually fought between 208-220 pounds? What if the American overlooked the unknown South African? Was Thabiso’s coming out party just a matter of being in the right place at the right time (against the right opponent)?

This afternoon, Garrett Wilson will help Thabiso answer those questions for the fans that care to ask them. The cruiserweights headline a special afternoon edition (12:00 p.m. PT/ 3:00 p.m. ET) of NBC Sports’ “Fight Night” from the Foxwoods Casino in Mashantucket, Conn.

If Thabiso doesn’t deserve to be viewed as a bona-fide contender, Wilson will let us know. Wilson (13-7-1, 7 KOs) is a gatekeeper. He has his flaws and limitations but he’s the kind of experienced, hardnosed, strong-willed fighter who either beats opposition that isn’t world class – as he did former prospect Aaron Williams, faded former contender Omar Sheika and once-beaten Chuck Mussachio – or he gives them hell, as he did then-unbeaten heavyweight hopeful Vyacheslav Glazkov in his last bout.

Glazkov outpointed Wilson over 10 rounds last November, but despite the Ukrainian’s vast amateur experience and a 25-pound weight advantage, he struggled with the squat Philadelphian, who took the fight on a few days notice when Glazkov’s original opponent Thomas Adamek pulled out sick the week of the NBC Sports Net-televised bout.

The staff of Main Events, promoter of Mchunu and Saturday’s card, put together an analysis of both fighters for the boxing media. The following is their breakdown of Wilson’s strengths and weaknesses, which illustrates why he gives his opponents so much trouble but hasn’t been able to advance to contender status.

“Wilson possesses good punching power in both hands; he recorded knockouts in his previous three wins. His unorthodox style can throw his opponents off his game. He also shows great confidence in the ring and believes that he belongs in there with the best of them.”

“Wilson lacks an effective jab and also allows himself to get hit more often than he should. He throws a lot of wide and looping punches that could backfire in this fight due to the elusiveness and counter-punching abilities of Mchunu.”

Wilson’s trainer Rodney Rice has been working with his fighter’s jab and technique. Wilson did well enough against Glazkov to earn another opportunity on NBC Sports Net. We will see how well he does in his natural weight class with a full camp under his belt.

Last July I compiled a list of the sport’s more reliable gatekeepers and I led the article with one of my favorites, welterweight veteran Jesus Soto Karass, who was set to fight former titleholder Andre Berto in a Showtime-televised main event on July 27. Soto Karass did his job that night and let fans know if Berto was still a contender. He wasn’t. Soto Karass stopped him in the 12th round.

But a lot can change in boxing in a little over a year. Soto Karass, who has since lost to back-to-back bouts to Keith Thurman and Devon Alexander, is no longer my top welterweight gatekeeper and the more reliable ones in many other weight classes have also been replaced. So I thought it was time for another list of the most reliable gatekeepers in each weight class.

Before we get to it, I want to state that I mean no disrespect to anyone on this list. All of these guys can fight. Many of the men on this list have been top-10 contenders; and some have held major world titles. Some may do so again.

Bottom line: they all have my respect, which is why I enjoy putting out this kind of list. Pound-for-pound and all-time great rankings only give us debate. Gatekeepers give us answers.

The former two-time IBF cruiserweight titleholder is sorely undersized at heavyweight but his experience, skill, and warrior’s heart make him a good gauge for the big boys. Since moving up past 200 pounds two years ago, Cunningham showed that Adamek’s best days were behind him by boxing the Polish star to a split decision loss (that most think he should have won), he exposed Tyson Fury’s chin by flooring the UK giant before being overwhelmed by sheer size, and he outboxed former hopeful Manuel Quezada and unbeaten puncher Amir Mansour (getting up from two knockdowns to do so). On Oct. 18, the USS Cunningham sails again against untested first-round KO specialist Natu Visinia (10-0, 8 knockouts).

After suffering stoppage losses to Sergey Kovalev and Andrzej Fonfara last year, the former WBA titleholder showed that he (and his career) still has some legs by outworking and overwhelming unbeaten prospect Thomas Williams Jr. last month. The confident 35-year-old southpaw’s beautiful blend boxing, combination punching and footwork “exposed” Beibut Shumenov and Tavoris Cloud before Bernard Hopkins did (even though the Spaniard was shafted by the official judges).

The two 168 pounders fought off-TV last month (with George winning a decision to claim the IBO title in his hometown of Chicago). Both have had their share of recent setbacks, but the two are solid all-around fighters who bring enough to the ring (George brings more strength, Davis brings more savvy) to shock anyone na├»ve enough to view them as stepping stones (as undefeated-but-untested upstarts Cornelius White and Marcus Johnson discovered in 2011). It says here George and Davis would either outbox or walk through all of The Money Team 168 pounders (Badou Jack, J’Leon Love and Luis Arias).

The two former junior middleweight contenders are scheduled to fight in the co-feature to the Bernard Hopkins-Kovalev light heavyweight title unification bout on Nov. 8. It should be a competitive and entertaining scrap given their strengths and weaknesses. Both are experienced with fierce pride, which makes them a threat. But both also have their vulnerabilities, as Kirkland is a bit chinny and susceptible to early rounds drama, while Rosado is prone to severe facial cuts. Kirkland’s relentless pressure and volume punching recently busted the cherry of popular prospect Glen Tapia. Rosado’s grit and underrated technique and ring generalship enabled him to give then-undefeated J’Leon Love and former WBO titleholder Peter Quillin hell.

The 28-year-old Santa Barbara native has won nine in a row since two early career losses to Karim Mayfield, a draw with hot prospect Julian Williams and an eight-round decision to current contender Jermell Charlo. Santana’s streak includes 10-round decisions over veteran Freddy Hernandez and Joachim Alcine, and a head-turning decision over previously unbeaten (16-0) prospect Eddie Gomez. Santana is physically strong, has above-average power, a solid chin and an effective pressure fighting style, but his will to endure through adversity is what makes him dangerous.

“The Riverside Rocky” was undersized against Canelo Alvarez and overpowered by Marcos Maidana, but the 30-year-old slugger is handful for most welterweights, as Jessie Vargas, Victory Ortiz and Aaron Martinez can attest to. Lopez has underrated boxing ability, plus the experience of 40 pro bouts, but like Santana, his will power is what makes him such a dangerous foe.

Junior welterweight – Humberto Soto. Since being stopped by Lucas Matthysse in June 2012, the savvy former 130- and 135-pound beltholder has won seven in a row, including decisions over Mexican prospects Jose Lopez and Mahonri Mones, veteran spoiler Silverio Ortiz, and his recent 10-round nod over dangerous puncher John Molina. The fifth-round TKO to Matthysse aside, the 34-year-old technician has an iron chin and world-class ring generalship. He’s a handful for any 140 pounder.

The Spain-based Russian veteran was outpointed by undefeated fringe contender Dejan Zlaticanin and overpowered by Marcos Maidana in recent years, but his experience, versatility and intelligent aggression was too much for the opponents he faced and defeated en route to winning the 2014 Boxcino Lightweight Tournament. Petrov outclassed fellow Russian Fedor Papazov, an undefeated (15-0) prospect, and he scored stoppages against rangy 6-foot switch-hitter Christopher Rudd and hard-slugging southpaw Fernando Carcamo. Petrov doesn’t have world-beating athleticism but he’s a complete fighter and consummate professional.

The squat Mexican scrapper is arguably the most battle-tested active fighter under the age of 30. Since suffering a fifth-round KO to then-WBC lightweight titleholder Antonio DeMarco and splitting 10-round decisions with Dante Jardon in 2012, the 28-year-old veteran of 58 pro bouts has strung together nine victories, including stoppages of lightweight prospect Enrique Tinoco and former titleholders Juan Carlos Salgado and Daniel Ponce de Leon (who retired afterward). Like most of the guys on this list, “Mickey,” who has been in a few Fight of the Year candidates, has a never-say-die attitude that sometimes allows him to defeat bigger, stronger, and more-talented fighters.

The 30-year-old former beltholder has gone 3-3 since being stopped in the final round of his 12-round battle with Jorge Arce in 2011, being outpointed by then-pound-for-pound player Nonito Donaire, Japanese slugger Yasutaka Ishimoto and Marvin Sonsona (who he had KO’d for WBO 122-pound title in 2010). But the late-comer to the sport has such solid technique (instilled in him by his hall-of-fame worthy father) that he has made things very difficult for all the men who have defeated him, while having too much for fringe contender Jonathan Oquendo and undefeated young upstart Guillermo Avila.

The 30-year-old late-comer had mixed success when fighting outside of his native Mexico, beating crafty fringe contender Christopher Martin but losing decisions to more experienced Jesus Ruiz and undefeated prospect Manuel Avila in recent bouts that took place in California. However, the aggressive-but-smart boxer may have turned the corner with his fifth-round knockout of former Cuban amateur standout Yoandris Salinas on the Canelo Alvarez-Erislandy Lara undercard in July. Salinas, who was unbeaten in 22 bouts, was coming off a 12-round draw with top contender Scott Quigg.

The former top junior bantamweight contender, who stopped Simphiwe Nongqayi to earn the IBF 115-pound belt in 2010, is still a threat despite title bout decision losses to Cristian Mijares and Juan Carlos Sanchez Jr., as bantamweight prospect Alejandro Gonzalez Jr. discovered in April. Rosas outpointed Gonzalez, the son of the former WBC featherweight titleholder, via nine-round technical decision. Gonzalez was unbeaten in 24 bouts (22-0-2) prior to the loss.

The 29-year-old Venezuelan recently dropped a unanimous decision to David Sanchez for the WBA’s interim 115-pound belt in May, but prior to that loss the well-traveled Venezuelan earned a sixth-round stoppage of far-more experienced former 108-pound standout Cesar Canchilla in Colombia.

The Filipino veteran lost a decision to crafty boxing Amnat Ruenroeng for the vacant IBF title in January but “The Road Warrior” was on a 15-bout win streak, which included many capable fringe contenders from Japan, Mexico and Thailand, prior to the setback.

The former IBF titleholder who was such a fierce southpaw that he earned the nickname “Little Pacquiao” has gone 4-4 in his last eight bouts, including an eight-round decision to former Japanese champ Ryoichi Taguchi in July. However, the 34-year-old veteran has enough spark left to knockout prospect Cris Alfante and be competitive with undefeated Thai contender Wanheng Menayothin and once-beaten South African star Hekkie Budler, who now holds the WBA title, in 12-round bouts.