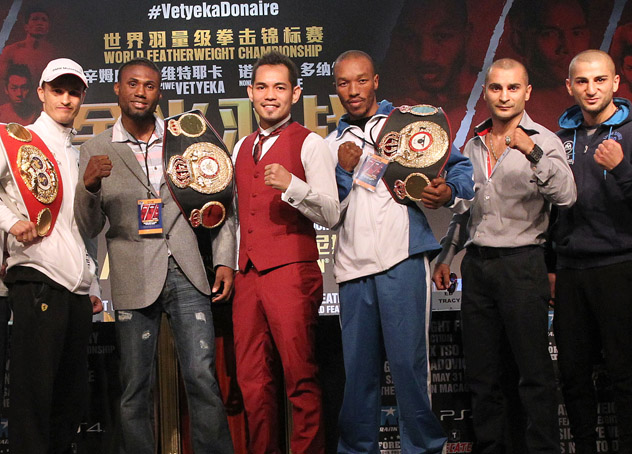 Undefeated contender Nicholas Walters plans to “show everyone who is the best” featherweight on Oct. 18 against three-division titleholder Nonito Donaire in the co-feature to the Gennady Golovkin-Marco Antonio Rubio WBA middleweight title bout at StubHub Center in Carson, Calif.

“This is my dream fight,” said Walters, 28, THE RING’s No. 3-rated featherweight ahead of the No. 4-rated Donaire. “It’s now the time to show everyone who is the best 126-pound world champion in the entire world.”

In his last fight in May, Donaire (33-2, 22 KOs) scored a fifth round technical decision that dethroned Simpiwe Vetyeka as WBA beltholder at the Venetian Macao in Macao, China.

A winner of his seventh major title in a fourth weight class against Vetyeka, Donaire scored a knockdown in round four and survived headbutts and poor officiating by referee Luis Pabon.

“I am very excited for this fight,” said Donaire, 31. “We are doing everything we can to be ready for everything Walters brings on Oct. 18.”

On the Donaire-Vetyeka undercard, Walters (24-0, 20 KOs) dominated two-division titleholder Vic Darchinyan en route to a fifth round stoppage, flooring the 38-year-old veteran once in the second round and twice in round five.

“The featherweight division has a rich history with epic match-ups,” said Todd duBoef, president of Top Rank Promotions. “Nonito Donaire and Nicholas Walters are two of the great champions in the division today. This promises to be an entertaining, exciting world title battle.”

In the HBO-televised main event, Golovkin will pursue the 12th defense of his WBA belt and his 18th straight knockout victory against Rubio, who has won his last six fights, five by knockout, since dropping a unanimous decision to Julio Cesar Chavez Jr. in February 2012.