Despite criticism, Lampley optimistic for new season of ‘The Fight Game’ 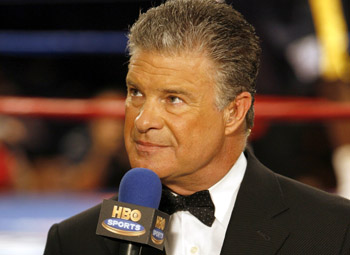 Those are the words HBO play-by-play announcer Jim Lampley has used in describing “The Fight Game,” a show he hosts and serves as an executive producer on since it premiered in 2012.

To many fight fans, however, the show is not living up to those descriptions.

Nonetheless, Lampley remains steadfast and confident the show will continue to improve, building upon its format and tackling new topics he believes fight fans will embrace.

Lampley is no stranger to hardcore or casual boxing fans. He has worked for HBO since 1988, calling some of the network’s more memorable fights, including James “Buster” Douglas’ knockout win over Mike Tyson in 1990, both of Andrew Golota’s disqualification losses to Riddick Bowe, and the Auturo Gatti-Mickey Ward trilogy a decade ago.

The 65-year-old broadcast veteran has also worked for high-profile networks such as ABC and NBC, calling professional football games and covering or hosting a record 15 Olympic Games.

The first two seasons of “The Fight Game” received mixed reviews from writers and boxing fans alike. There has been positive feedback on the “Gatti List,” a pound-for-pound ranking of boxing’s most entertaining fighters named after the late Arturo Gatti. Fans also like the compilation of videos that show knockouts or memorable rounds.

Other fans have voiced their displeasure, from the show is too short to Lampley interviewing the same writers and colleagues (which include fellow HBO commentators Roy Jones and Max Kellerman).

Having reviewed the feedback, Lampley is optimistic that the show will win over fight fans, starting with tonight’s show.

“I would love to have always been doing the show once a month,” Lampley told RingTV.com in an interview while watching a fight card in the San Diego area a few weeks ago. “The network needed some time to develop the program, see how the audience is going to respond from episode to episode. Does it matter whether we have fights in the ring that tie directly to what I’m doing on the show, or does the show stand alone; and I think ultimately the returns on all that are positive for ‘The Fight Game.’ And positive enough that the network now understands we can put the show on every month. There’s going to be an audience, it doesn’t matter whether it ties directly to the fights that we’re putting on the air. This is a general boxing news show for the whole boxing audience.

“It’s all right for Lampley to talk about what’s happening on Showtime or other networks and it isn’t going to hurt us. All of that had to be exhibited over a period of time, to get us to the point where we are now.”

The premiere of the fall season could not have come at a more opportune time. There has been a thawing of the Cold War (the phrase describing the rivalry between Top Rank and Golden Boy Promotions) and there are a number of high-profile fights later this fall.

“I’m really excited because we’re coming back on the air at a moment when there’s a lot to talk about,” said Lampley, who resides in the San Diego area. “There’s been some very significant shifts in the promoter landscape that lead us to hope, at least, that we’re going to be seeing better competition and more matchmaking of fighters from separate promoters.

“With that as a starting point for discussion, with (Gennady) Golovkin coming to Southern California the following month and a lot of excitement about that, with Bernard Hopkins having broken the mold once again to cross the ‘Cold War’ line and agree to fight (Sergey) Kovalev, it’s a really great time for the sport and I’m thrilled that we’re getting back on the air to talk about all that on ‘The Fight Game.'”

As far as format goes, the show will remain a half hour. Tonight, Lampley will update the “The Gatti List” and show highlights of recent fights, including Golovkin’s knockout of Daniel Geale and Kovalev’s knockout over Blake Caparello from this past summer.

While fight fans may continue seeing the likes of writers Chris Mannix, Dan Rafael and Steve Kim being interviewed, along with Jones and Kellerman, Lampley has some surprises in store as to whom he’ll speak to.

“I should be able to use more time to do meaningful interviews that advance the profile of the sport. For instance, I haven’t had that many interviews on the show recently because of the ‘Cold War.’ But now, we’re back in the position to talk to Oscar (De La Hoya). I’m going to be looking forward to talking to Oscar. Back in the position to talk to Bob (Arum) without worrying about whether we’re talking to other promoters at the same time. And these things are going to help to continue to build a bridge to viewers and give them a picture of the entire sport that helps them to appreciate what we put on the air.

“What has become clear is that you can never give boxing fans too much highlight footage. They love seeing exciting knockouts or controversial moments from fights. If I show it to them two or three times, it doesn’t matter. It still has the same appeal and the same life. So a lot of the show is driven by what’s the most spectacular recent video. By the time I come on the air, nearly two months will have passed since Golovkin knocked out Daniel Geale. But people still want to see it. How many times can you watch that replay without being amazed at the fact that Golovkin managed to take a punch in the middle of his face and in the same motion fire back and knock the guy silly? Off-balanced. He’s an amazing athlete. And you saw in it in that one clip and you’ll see it again on Sept. 16.”

While it will be interesting to see how the show will transpire over the next couple of months, one has to give credit to Lampley for realizing the show needed to work out its kinks and for listening to fight fans he comes across, whether at fight cards he calls for on HBO or fight cards he attends as a spectator.