Bob Arum and Oscar De La Hoya to be featured on ‘The Fight Game’ Sept. 16 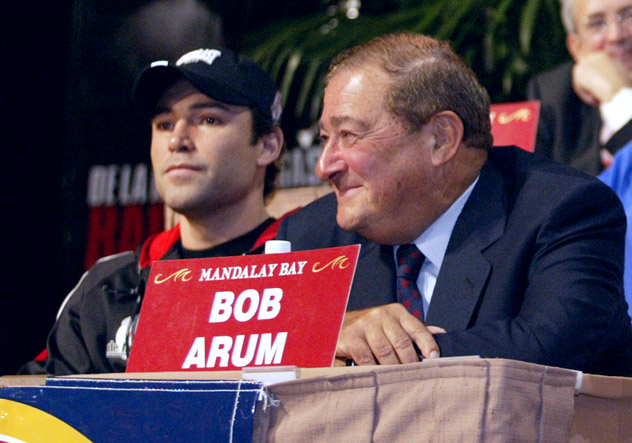 “We taped it yesterday,” said Arum during a Wednesday interview with RingTV.com. “So Jim Lampley will have us both on tonight [scheduled for Sept. 16, 11 p.m ET/PT/10 p.m. central].”

De La Hoya has stated he wants to “end the Cold War” with Top Rank and HBO Sports and toward also quashing the acrimony between Arum and powerful advisor Al Haymon, who works with many of the fighters traditionally promoted by De La Hoya.

“I can’t really add anything to what Oscar has said. He has characterized our conversation and we’re going to speak again at the end of the week,” said Arum, who declared his relationship with De La Hoya “totally repaired” after a meeting in May. “We’re moving in the direction of making specific fights. I don’t want to mention any of the fights until we finalize them, so it was all good.”

Lampley said the Arum-De La Hoya “reconciliation” is “confirmation of what everybody’s been reading and hearing about.”

“They’re sitting shoulder-to-shoulder, although they’re shoulder-to-shoulder via the miracle of television because Bob Arum was in Las Vegas and Oscar was in Los Angeles. But they are on together, and it’s as much about how they say what they say and how they look when they’re saying it as what they say. But it’s a visual confirmation of what everybody’s been reading and hearing about,” said Lampley.

Gabriel Rosado is planning to “set traps” for southpaw James Kirkland in their bout on the Nov. 8 undercard of the Bernard Hopkins-Sergey Kovalev light heavyweight title unification bout at Boardwalk Hall in Atlantic City, New Jersey.

As part of an event being promoted by Golden Boy Promotions and Main Events to be televised on HBO, Rosado (21-8, 13 knockouts) will fight Kirkland (32-1, 28 KOs) “at 156 or 157” pounds “give or take,” according to Kirkland’s legal advisor, Michael Miller.

“I just feel that going into this fight, stylistically, this suits me because James Kirkland is so aggressive and I’m just going to set traps. I like to bang too but I just have to be smart and box too,” said Rosado, 28, who will be in his first fight under veteran trainer Jesse Reid.

“Now that I live in Los Angeles, I’m a lot more focused with Jesse Reid in my corner. He’s a new voice and his experience is bringing a lot more out of me. I feel like I’m in my prime right now. Being that it’s James Kirkland, I think that it’s a fan-friendly fight. When you have Bernard on the card in the main event and then, the match-up with me and Kirkland, the fans are going to get more bang for their buck.”

Rosado had Reid in his corner last month when he defeated Bryan Vera in the Big Knockout Boxing event, which does not count toward his professional boxing record.

Rosado will be attempt to end a three-fight losing streak against Kirkland, 30, a winner of five straight fights, including four by knockout. Kirkland was last in action for a sixth round stoppage of previously unbeaten Glen Tapia at Boardwalk Hall in December.

In January, Rosado lost a unanimous decision to Jermell Charlo that had followed a 10th round stoppage loss to then-WBO middleweight titleholder Peter “Kid Chocolate” Quillin at Boardwalk Hall in October.

“[Boardwalk Hall] where I fought Kid Chocolate and there were a lot of people who showed up. I think that you’re going to see a lot of people show up for these fights as well,” said Rosado. “In my last fight versus Vera, I was a much more focused fighter. It was probably one of the best camps that I’ve had.”

Rosado and Kirkland share a common opponent in Alfredo Angulo. Angulo scored a second round stoppage win over Rosado in August 2009. In November 2011, Angulo lost to Kirkland by sixth round knockout during a fight in which both fighters were dropped in the first round.

“Angulo was more in his prime when I fought him and I was just coming up. I was learning on the job being that I started so late,” said Rosado. “So it was two different Angulos from my fight to the time that Kirkland fought him. I think that when Kirkland fought him, [Angulo] was already starting to go downhill at that time. So I don’t really look to deeply into that.”

The 6-foot-5 Thompson confirmed he will fight Solis in an attempt to rebound from a unanimous decision loss to Carlos Takam in June.

“We talked about it before right after the fight with Takam and now we have a set date,” said Thompson, who will face Solis in Dusseldorf, Germany. “The last time, they gave me a split decision even though I beat him clearly, so I’m going over there this time for the knockout.”

Prior to facing Solis, Thompson lost a unanimous decision loss to Bulgaria’s undefeated Kubrat Pulev in August 2013 in Germany.

Pulev-Thompson’s was an IBF eliminator for the right to face RING champion Wladimir Klitschko, against whom Thompson has been stopped in the 11th and sixth rounds in Germany and Switzerland, respectively, in title challenges in July 2008 and July 2012.

De La Rosa, 26, dropped Angulo in the second round of their 162-pound bout and endured a late rally by his rival in the ninth and 10th en route to a unanimous decision in support of Floyd Mayweather Jr.’s unanimous decision over Marcos Maidana at the MGM Grand in Las Vegas.

“I saw myself winning going into the fight. I thought that it would be a closer fight and a lot different but I came out with the victory and that’s all that mattered,” said De La Rosa, who had gone 2-2 over the course of his previous four fights.

“I know that toward the end, he caught me with some shots but I didn’t let anything bother me. Throughout the win, it shocked me that he didn’t hit me as hard as I thought he would and that he wasn’t as strong as I thought that he would be. But I got my opportunity to be on the big stage, which is something that I’ve wanted since I was a kid. “

“They’re a first-class promotional company, so it’s a very good relationship. We’re hoping to get James on the Dec. 6 [Saul] ‘Canelo’ [Alvarez] card and then go into next year hopefully with our first fight being against Canelo on a huge stage.”

The loss was the third straight for Angulo, whose previous setbacks were by 10th round stoppages to Erislandy Lara and Canelo Alvarez in June of 2013 and last March, respectively.

Angulo’s manager, Michael Miller, said he planned to talk with the fighter and his trainer, Virgil Hunter, “to determine what’s next and where he goes from here.”