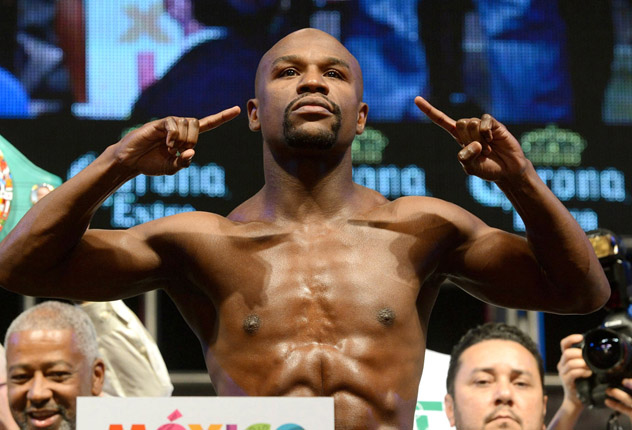 Floyd Mayweather Jr.: OK, Mayweather is 37, an age when most fighters are in the process of slowing down. And, yeah, the pound-for-pound king had a few rough moments in his first fight with Marcos Maidana, which was the reason a rematch took place Saturday at the MGM Grand in Las Vegas. Let’s be honest, though: We all more or less knew what was going to happen in the ring. Mayweather would do a better job of avoiding Maidana’s bull rushes and stay off the ropes while landing more than enough shots from a safe distance to win rounds and the fight. That’s exactly what happened. Mayweather used still-lively legs to move out of harm’s way or, more frequently, latched onto Maidana to stifle any potential attack. And, as always, “Money” landed crisp, accurate shots from the outside; not many of them but more than enough to win a unanimous decision. Italian judge Guido Cavalleri had it 115-112 (including a Maidana point deduction), or a too-close seven rounds to five. The other judges (Dave Moretti and John McKaie) both had a more accurate score of 116-111, eight rounds to four. I scored it 117-110. In the end, there was no doubt who had won. Mayweather (47-0, 26 knockouts) entered the ring with a good game plan and executed it almost flawlessly. Just as expected.

Marcos Maidana: I thought Mayweather would defeat Maidana (35-5, 31 KOs) easily in a relatively uneventful fight. No stretch there. Mayweather is a great fighter, Maidana isn’t even close to that. The Argentine had one fascinating moment – when a hard right rocked Mayweather in the closing seconds of Round 3, a punch that would’ve been more interesting had it happened earlier in the round – and was effective when he fired both hands with reckless abandon. However, those moments were the exception. He was never really able to cope with Mayweather’s hit-and-not-be-hit game plan, which worked better in the rematch than it did when they fought in May. Thus, aside from the one big punch, the result was never in doubt. Where does that leave Maidana? He might be described as an overachiever. No one, not even he, could’ve imagined that he’d face Mayweather twice after he was nearly shut out by Devon Alexander a few years ago. He won the Mayweather lottery two times with his stunning victory over Adrien Broner and a stronger-than-expected performance against Mayweather in May. He earned the millions he has made this year. And, while he probably won’t earn more seven-figure paydays, he’ll still command good money. Maidana isn’t a great boxer but fans will remain enamored by his grit and punching power, which he has demonstrated so many times in his career. In other words, Maidana is fun to watch – even if he has little chance of winning.

Referee Kenny Bayless: Bayless, one of the better referees in the business, didn’t have his best night on Saturday. I understand that clinching is a part of boxing, although I wish it weren’t. I believe the tactic is unfair to aggressive fighters and stops the action in its tracks. I have to accept it, though. None of us should have to accept excessive clinching, which I believe Mayweather was guilty of on Saturday. A fighter who wants to blunt the attack of an aggressive opponent when he gets close must merely tie up his arms until the referee breaks them up. That’s not fair to a fighter like Maidana, who thrives on the inside. Mayweather should’ve been required to move or fight his way out of danger more than he did. That’s where Bayless’ should’ve come in. He should’ve warned Mayweather two or three times not to hold and then started to deduct points. He issued at least one warning but really did nothing about it. Plus, at times, Bayless appeared to break up the fighters when Maidana had a free hand and was able to punch. I would’ve ordered them to fight out of such clinches or just slapped away the hand with which Mayweather was holding and allowed them to continue. I was incensed when Bayless penalized Maidana a point when Mayweather went to the canvas because Mayweather, by holding incessantly, fouled the entire fight. However, holding is the issue. Commissions must push their referees to penalize those who do it excessively. That’s the only way to solve the problem.

Mayweather and domestic abuse: Mayweather had a rough week leading up to the fight. On Tuesday, when asked about the indefinite suspension of Ray Rice for knocking out his then-fiance, Mayweather told reporters that the NFL should’ve stuck with its original two-game suspension even after a video of the KO punch emerged. He said this: “Things happen. You live and you learn. No one is perfect.” And then: “I think there are a lot worse things that go on in other people’s households also. It’s just not caught on video.” Seriously? Mayweather apologized the next day but it was too late: He had an opportunity to condemn a horrendous act but came off as an apologist. A few days later, in a dramatic interview with Rachel Nichols on CNN, he wouldn’t comment again on Rice. That was smart. However, Nichols then brought up his prison term for domestic violence against the mother of his children and other alleged incidents cited in a story on Deadspin.com. Mayweather denied wrongdoing, coldly referring to the allegations as “hearsay” and adding: “Everyone is entitled to their own opinion. When it’s all said and done, only God can judge me.” No. At this moment, a lot of people are judging Mayweather. And he doesn’t look good.

Judge Robert Hoyle’s: I thought Miguel Vazquez beat Mickey Bey in a competitive fight, as most observers did, but I don’t have a big problem with Bey being awarded a close decision. I do have a problem with Robert Hoyle’s scorecard: 119-109 (or 11 rounds to one) for Bey. Huh? Bey had his moments, particularly down the stretch, but he in no way set himself apart from Vazquez on such a one-sided scale. The fact is neither Bey nor Vazquez like to mix it up. As a result, we saw a lot of moving around but not a lot of punching. According to CompuBox, Vazquez outlanded Bey in overall punches a paltry 89-81. What did Bey do to deserve 11 rounds? Judge Adalaide Byrd scored it 115-113 for Vazquez (about what I had) while Julie Lederman had it 115-113 for Bey. That reflected what happened in the ring. Kudos to Bey, who only four fights ago was brutally stopped by John Molina in a fight Bey was winning. Taking the IBF lightweight title from a champion of Vazquez’s caliber is a significant accomplishment. Vazquez hadn’t lost since he was outpointed by Canelo Alvarez in 2008. The Mexican technician will be back.

Maidana probably did bite Mayweather’s hand, which is unacceptable under any circumstances. I think he should be fined by the Nevada State Athletic Commission if officials can determine conclusively that Maidana is guilty as charged. I believe Maidana was acting out of instinct because Mayweather’s glove covered his mouth; he wanted it removed by any means possible. Still, biting is beyond the pale. ÔÇª Mayweather was asked after his victory whether he might yet fight Manny Pacquiao. He wouldn’t dismiss it. I maintain the elusive matchup remains a realistic possibility because of the amount of money to be made, particularly because Mayweather and Pacquiao know their prime earning days are approaching an end. Plus, I suspect Mayweather perceives Pacquiao as less dangerous today than when they should’ve fought years ago. The promotion would still be the biggest in history. ÔÇª Assuming Mayweather doesn’t fight Pacquiao next, I presume Amir Khan is next in line. I like a Mayweather-Keith Thurman matchup but I think Thurman could use one or two more fights of seasoning. Khan, who can match Mayweather’s speed, is as ready as he’s going to be. ÔÇª

Check out the body shot by Scott Quigg (29-0-2, 22 KOs) that stopped Stephane Jamoye (26-6, 16 KOs) on Saturday in Manchester, England. Vicious. The victory could set up an all-U.K. showdown between Quigg and IBF junior featherweight titleholder Carl Frampton (19-0, 13 KOs). Exciting potential matchup. The winner could ultimately face WBC junior featherweight titleholder Leo Santa Cruz (28-0-1, 16 KOs), who stopped Miguel Roman (17-3-3, 6 KOs) in two rounds on the Mayweather-Maidana card. ÔÇª Luis Ortiz (22-0, 19 KOs) is in position to make some noise in a weak heavyweight division after scoring another early-rounds knockout, this time over Lateef Kayode (20-1, 16 KOs) only 2:55 into the fight Thursday in Las Vegas. Ortiz, a Cuban, has a vast amateur background, is big (6 feet 4 inches, 233¾ pounds on Saturday) and has power. I thought referee Robert Byrd’s stoppage was somewhat premature. I don’t think Kayode was in serious trouble but, under heavy assault, he didn’t return fire. Kayode, a former cruiserweight, never looked comfortable against the bigger man. ÔÇª Alfredo Angulo (22-5, 18 KOs) might be finished as an elite fighter. The popular Mexican lost a one-sided decision to relative unknown James De la Rosa (23-2, 13 KOs) on the Mayweather-Maidana card, his third consecutive setback and fourth in six fights. Angulo has been in so many wars. He just might not have any more to give.