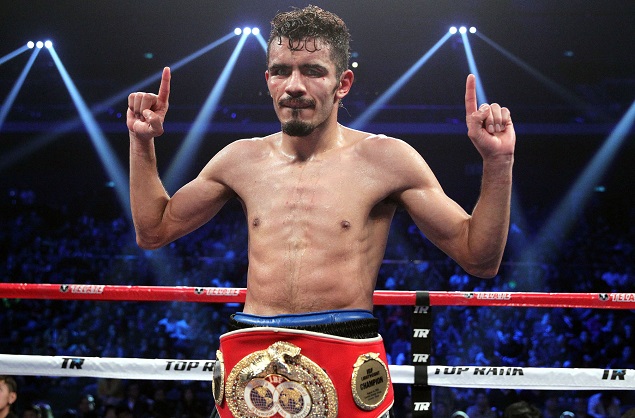 RingTV.com has a live round-by-round update of Saturday’s lightweight bout during which Mickey Bey dethroned Miguel Vazquez as IBF beltholder by split-decision at the MGM Grand in Las Vegas.

Vazquez was riding a 13-fight winning streak that included only three knockouts, having previously suffered his last defeat by unanimous decision to current junior middleweight contender Saul Alvarez in June 2008. Vazquez had also lost his professional debut to Alvarez by split decision in January 2006 and fell by unanimous decision to two-division titlewinner Tim Bradley in July 2007.

Bey was coming off a unanimous decision over Alan Herrera in May that followed a third round stoppage of Carlos Cardenas in December. The wins helped Bey rebound from a 10th round stoppage loss to John Molina in July 2013.

Round 1: Fighters at ring centger, Vazquez comes out jabbing, circling. Both jabbing. Vazquez has landed at least once off the jab. Probing round. Vazquez lands insidy e off a counter hook. Triple-jab attempt by Bey falls short. Light jab lands for Vazquez. Left hook lands for Vazquez and another. Vazquez sticks the jab just prior to the bell. Vazquez, 10-9.

Round 7: Bey has to get physical. Vazquez lands two body shots and a head shot all with the right during a clinch. Steve Farhood has it for Vazquez, 58-56. Vazquez continuing to get off first, although Bey lands a nice hook. Right by Vazquez. Lead right by Vazquez and a clinch. Jab by Vazquez. Clinch. Right to the head by Vazquez. Hook by Bey. Ugly fight. Bey misses four shots. Vazquez, 10-9; Vazquez, 69-64.

Round 8: Vazquez told to mix it up more by his corner. Bey has out-landed Bey, 57-44, so far, according to statistics through seven rounds. Farhood has it for Vazquez, 67-66. Short hook inside by Vazquez. Jab by Bey. Right by Bey. Double-jab by Bey, who has picked up the pace. Left hook by Vazquez may have shaken Bey. Jab by Vazquez. Vazquez, 10-9; Vazquez, 79-73.

Round 9: Floyd Mayweather Sr., Bey’s trainer, is frustrated with him. Farhood has it for Vazquez, 77-75. Right and a left by Vazquez. Bey having trouble getting off. Vazquez has out-landed Bey, 38-27, in power shots, if you can call them that. Jab by Bey, who is inconsistent. Jab by Bey. Right and a left by Bey sneak in just prior to the bell. Bey, 10-9; Vazquez, 88-83.

Round 10: Solid jab early by Vazquez, who is on the move. Another jab by Vazquez. They trade jabs. Paulie Malignaggi has Vazquez up by six points. Farhood has it for Vazquez, 87-84. Simply no significant action. Jab by Vazquez, and another. Jab by Vazquez. Bey not fighting with any urgency. Right by Vazquez before the bell. Vazquez, 10-9; Vazquez, 98-92.

Round 12: Vazquez told to “throw the haymaker” in his corner. Good luck seeing that. Clubbing rights by Vazquez during a clinch. Hook by Bey. Right by Bey. Double-jab by Bey, one lands. Farhood has it for Vazquez, 107-102. Left hook by Vazquez on the re-start. Right by Vazquez. Bey lands a right, left and right inside. At least Bey’s trying this round. Too late. Jab lands for Bey just prior to the bell. Bey, 10-9; Vazquez, 116-112.