Marcos Maidana and Robert Garcia prove to be successful combination 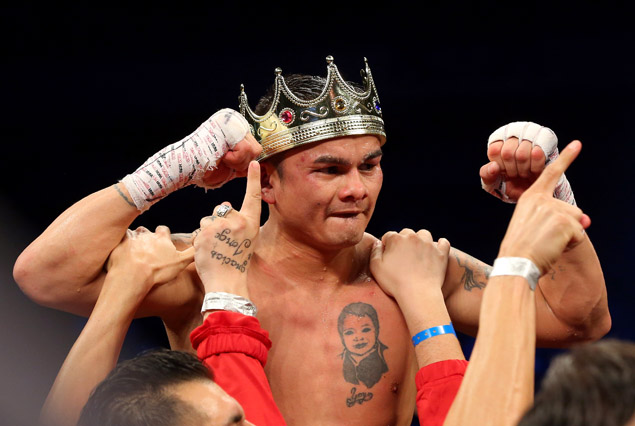 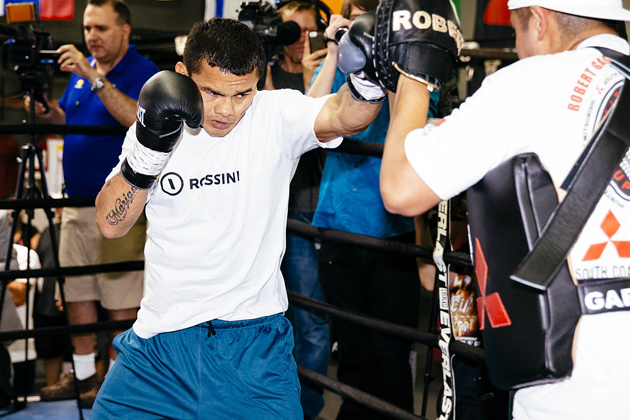 LAS VEGAS – When Marcos Maidana walked through the doors of the Robert Garcia Boxing Academy in Oxnard, California, in 2012, it was not the kind of boxing gym environment that Maidana was accustomed to in Argentina.

For a boxer who had lost his way and wasn’t really sure whether he wanted to continue in the sport, it was probably the best place on earth for him to land.

The Robert Garcia Boxing Academy is like going to boot camp at Camp Lejeune.

“Robert’s set up at the gym is awesome. It’s basically a badass factory,” said Chris Algieri, the WBO junior welterweight champion. “It’s the way they run it. The strength and conditioning program and all the boxing programs, the design itself is about getting fit and making tough guys.”

Instead of getting chewed up and spat out, Maidana has thrived in the super-heated environment. He was able to give Floyd Mayweather, Jr., boxing’s No. 1 Pound-for-Pound best boxer, a challenging match when they met for THE RING/WBC welterweight championship on May 3.

It was enough to earn a rematch. Maidana and Garcia believe they have come up with a plan that will turn the tables on Mayweather when they meet again at the MGM Grand Garden Arena on Showtime Pay Per View on Saturday night.

“I had never been in there against Mayweather with no other fighter,” Garcia said of the first match. “But after the fight we talk with Maidana on what he felt. I was really surprised. He thought Mayweather was going to be something different, something special. But he really didn’t feel that way. That gives us a lot more confidence, a lot more things to work on.”

They have been using all the resources at Garcia’s gym to hone Maidana’s skills to a fine edge so that he can take advantage of the weaknesses that he saw in the first fight against Mayweather. Garcia believes they can use continuous pressure to wear Mayweather down and not allow him to rest and throw more punches this time around. That means that Maidana will need the conditioning and endurance to go full out for 12 rounds and be prepared to take advantage of any split second openings that Mayweather presents.

The preparation has been grueling. But Maidana has not wavered. Garcia said all the boxers in the gym have to walk through the same furnace if they want to come out the other side champions.

“We have so many fighters that are fighting for world titles,” Garcia said. “Everybody has to think I have to be badass to be there. When Chino came in his manager was the one that found me and asked me to train him. At first Chino didn’t really want to be there. But once he got in there and started watching everybody else training and became friends with everybody.”

Sebastian Contursi, Maidana’s manager, was looking for a change of environment for Maidana after Rudy Perez, a veteran Mexican trainer, became ill and could no longer work with Maidana. Perez took a paternal approach with his boxers and was very easy going. He passed away from stomach cancer in 2013.

Contursi decided to allow the assistant trainer to step up and work with Maidana before his fight against Devon Alexander in 2012. Maidana looked horrible in losing a lopsided decision to Alexander. After the fight, Maidana fell into a depression and talked about retiring from boxing.

Contursi, who lives in Buenos Aires, went to visit Maidana at his home in Santa Fe in order to salvage Maidana’s career.

“I drove for six hours because I wanted to look in his eyes. I said you’re crazy if you retire. I said I have the right guy for you. Marcos doesn’t watch fights. So, he had no clue who Robert was. He trusted me,” Contursi said.

Even though Maidana was hesitant about what was ahead, he decided to travel to Southern California and work with Garcia. His doubts went away after a couple of days at the Oxnard gym.

“Very good gym and everybody was very friendly,” he said of his initial impressions. “I started with him since the (Jesus) Soto-Karras fight and I’ve got better with each one. I think I was losing my way a little bit and Robert got me back on track. I feel very comfortable with him and I think I’m going to retire with him being my trainer.”

Algieri sparred with Maidana before he fought Adrien Broner. His victory over Broner paved the way for Maidana to get his first shot at Mayweather. Algieri said Maidana was pretty much a finished product when he landed in Oxnard with eight years of experience and 30 professional fights under his belt. He said Garcia just had to refine what was already there.

“You make little, fine adjustments and they go a long way with a guy like that,” Algieri said. “He’s got those physical gifts. He’ll hit hard enough in the fight. You teach him two moves – slip a jab and throw a hook and it’s a big deal. More than anything it was getting him out of Argentina and getting him focused.”

Maidana felt comfortable with Garcia because he didn’t try to change his style.

“I trained with many other trainers and they always tried to change my style,” Maidana said. “I think that’s why I lost my way a little bit. With Robert it’s different. He added to my style. It’s the same style. He just fine tuned it and brought me back on track.

“I keep getting better every fight with the defense, the head movement. What’s Robert has done is fine tune me. With the first Mayweather fight I was just too anxious. Those are some of the problems I have to fix.”

Besides sparring with Algieri, Maidana also spars with Brandon Rios, who is the top tough guy at Garcia’s gym, and with Mikey Garcia, Garcia’s younger brother and WBO junior lightweight champion. No one holds back in sparring.

“I like being around world champions and tough guys. That’s why I’m there and that’s why I’m still there,” he said.