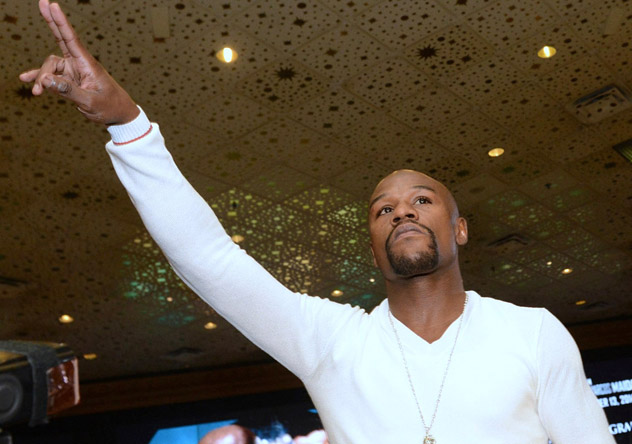 Sugar Ray Leonard recently placed Floyd Mayweather Jr. among “the proudest and confident champions in that he truly believes no one can beat him,” and picked Mayweather to win Saturday’s rematch with Marcos Maidana at the MGM Grand in Las Vegas, site of Mayweather’s majority decision victory over Maidana in May.

“I will again give the edge to Floyd, still based on what and who he is,” said Leonard of Mayweather (46-0, 26 knockouts), 37. “A 37 or 38-year-old Floyd is still so far ahead of everyone but it’s always that one night that natural physical reactions don’t happen.”

Prior to facing Maidana, Mayweather had last been in action when he dethroned Saul Alvarez for the RING and WBC 154-pound championships by majority decision in September.

The triumph over Broner represented Maidana’s fifth fight as a 147-pounder, his previous loss having been by unanimous decision to southpaw Devon Alexander in his welterweight debut in February 2012. After scoring knockdowns in the second and eighth rounds against Broner, Maidana landed 221 punches against Mayweather, more than any other fighter in his past 38 bouts, according to CompuBox stats.

“Floyd is amongst the proudest and confident champions in that he truly believes no one can beat him. Maidana came close, which makes this rematch a can’t-miss fight,” said Leonard, a five-division champion. “Maidana stands a chance to be victorious from my perspective of being able to fight Floyd for 12 rounds and not box Floyd…but my gut tells me that Floyd is not ready to lose Saturday night. God Bless both fighters.”