Steve Cunningham to return vs. Natu Visinia on Oct. 18 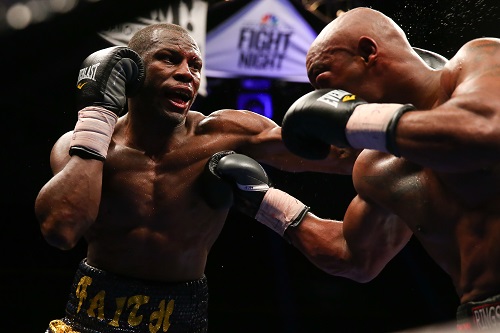 In his last fight in April, Cunningham (27-6, 12 knockouts) rose from a fifth round knockdown and floored his rival in the final stanza of a 10-round unanimous decision over previously unbeaten southpaw Amir Mansour, who outweighed Cunningham by 16.5 pounds.

Cunningham is 3-4 in his past seven fights.

A former left guard in football at Southern Illinois University where he majored in criminal justice, Visinia (10-0, 8 KOs) is coming off a unanimous decision over Jon Bolden in May. A native of Lakewood, Calif., Visinia, 29, lettered in football, wrestling and track and competed professionally in mixed martial arts for five bouts before switching to boxing.

“I am extremely excited for the opportunity to fight former cruiserweight champ Steve Cunningham,” said Visinia, who is promoted by Final Forum and Sal Musumeci. “As much as I admire his experience and accomplishments in the sport, I do not intend on leaving Philly without the win.”

In the co-main event, lightweight Jerry Belmontes will face Edner Cherry, the latter of whom unanimously decisioned Robert Osiobe in April. Cherry returned to action for the first time since February 2013 when he stopped Vicente Escobedo in the sixth round.

“I’m ready and hungry,” said Cherry, 32. “I guarantee the fans are going to get an exciting fight for as long as it lasts. I will show the world that I am the best 130-pound fighter in the world.”

“Once again, our matchmakers, Jolene Mizzone and Russell Peltz, have come up with a pair of intriguing crossroads fights to entertain the ‘Fight Night’ fans,” said Duva, of the broadcast, which begins at 9 p.m. ET.

“Steve Cunningham is always in a great scrap and the undefeated Visinia is determined to make a statement. Meanwhile, the battle between Cherry and Belmontes promises a lot of action from two fighters who need to win in order to advance their careers.”