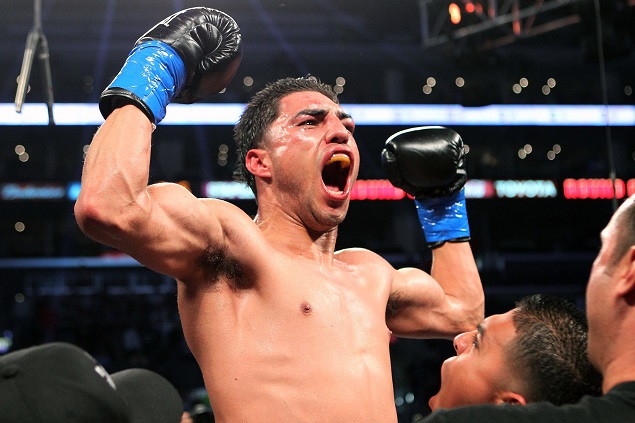 Miguel Vazquez is the favorite in his upcoming bout against Mickey Bey on the undercard of the Floyd Mayweather Jr.-Marcos Maidana rematch on Saturday, but the IBF lightweight titleholder has the mindset of a challenger going into his Showtime Pay Per View-televised fight.

That may seem a bit odd considering Vazquez is one of the top lightweights in the world, if not the sport’s best 135 pounder. But this mindset has brought him success, a world title, and bigger purses. If it ain’t broke, why fix it?

With little fanfare, and often with the criticism that his style is boring, Vazquez has put together a 13-fight winning streak that includes his world-title win and victories over four unbeaten fighters. His last loss was a decision to former junior middleweight champ Canelo Alvarez in a welterweight bout in June 2008.

In his last bout on Feb. 22, Vazquez won a 12-round unanimous decision over then-unbeaten Denis Shafikov in Macau, China. Bey, who suffered final-round stoppage to John Molina last year, isn’t unbeaten but the Mayweather Promotions boxer has shown flashes of brilliance, like in his last fight against Alan Herrera.

“I know he is going to come to win my title,” Vazquez told RingTV.com after a media day workout in Oxnard, Calif., two weeks ago. “But I’m coming into this fight well-prepared not to lose my title. I have confidence that I will be victorious that evening.

“There are fighters that have focused on talking, but I focus on fighting. I know there are a lot of people who think that I’m beatable in the ring, but when they get in the ring (with me) then they realize something else. Mercito Gesta was someone that talked before a fight. He kept saying that it was going to be easy. I focused on what I needed to do in that fight because I took that fight seriously and we beat him.”

Like most fighters, their success is won or lost in the gym. One’s psyche also pushes a fighter to push past his or her goals in the gym as well.

For Vazquez (34-3, 13 knockouts), aside from training and preparation, a unique mindset comes into play. Vazquez comes into the fight with the mentality that he is the contender, one who has to prove something to the boxing world.

“Truthfully, I never give up that hunger,” said Vazquez, who resides in Guadalajara, Jalisco, Mexico. “I won a title, but I always want more. I always prepare as if I’m fighting for a world title for the first time. I’m not the typical fighter who is a champion and believes he knocks down someone with their own breath. I prepare myself as if my opponent is the champion and I’m the challenger.”

Vazquez says he can still make 135 pounds easily, but there could be a move to 140 pounds in the future.

Vazquez may not have the fan-friendliest of styles, but it gets the work done and he is starting to get more credit within the last year. Rather than languish on small shows, Vazquez is now fighting in front of large audiences and bigger stages.

It is a testament to his physical and psychological strength. While he is favored to win, he is not taking Bey lightly.

“I know he is a fighter that counters, and attacks spontaneously and that it will be a hard and difficult fight. But I believe victory will come my way.”