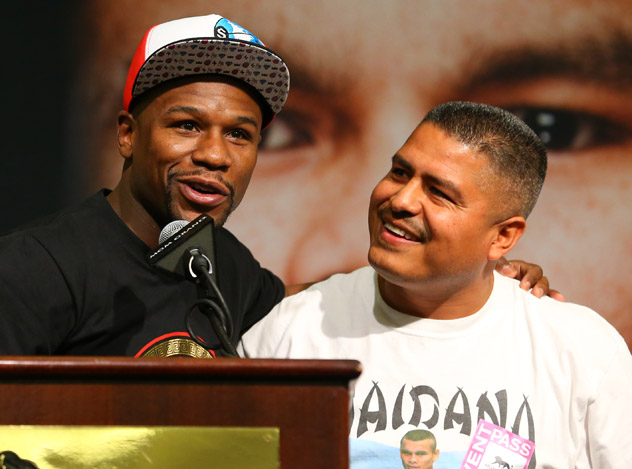 Robert Garcia has seen his fair share of the two fighters who have dominated the pound-for-pound best conversation for over a decade in Floyd Mayweather Jr. and Manny Pacquiao. The 39-year-old’s pupils are 0-3 against the duo – Antonio Margarito and Brandon Rios failed against Pacquiao while Marcos Maidana lost a narrow decision to Mayweather earlier this year – and can discuss both without a bias.

With only a few days until Maidana steps into the ring with Mayweather for a second time, the Oxnard trainer opened up about both fighters and the challenges that they present for a trainer.

For the rematch, Garcia says that he had Maidana spar extensively with his undefeated younger brother Mikey. However, he explains that trying to have sparring partners emulate Mayweather is a major mistake that can lead to disaster.

When asked if it is more difficult to prepare for Mayweather than Pacquiao, Garcia offered an interesting answer.

“I truly believe that Mayweather is the better fighter but Pacquiao is far more difficult to prepare for,” he said. “Pacquiao is just a different kind of fighter because of the the way he fights. He has that in-and-out movement, jumping from one side to another and throwing punches from all angles.”

But Garcia made it very clear that he believes that it is Mayweather’s ability to adjust on the fly that makes him the better pugilist inside of the squared circle.

“They both have accomplished so much (but) Mayweather has been the best fighter for the last 10 years,” Garcia continued. “Pacquiao has accomplished a lot as well but I truly believe that Mayweather is a much better fighter than Pacquiao.”

Although Garcia’s focus remains on Maidana evening the score with Mayweather, he didn’t shy away from the possibility for the Argentinean to get a crack at Manny Pacquiao with boxing’s cold war beginning to thaw out.

“(If we win), I would rather Chino face Mayweather for a third time than fight Manny Pacquiao,” Garcia said.

Maybe he is taking Mayweather’s recent retirement talk into consideration or perhaps he is looking at the fact that Mayweather granted his fighter another shot. Either way, Garcia figures that settling the score with Mayweather is something that is necessary and that the Filipino can wait. “If we go to Pacquiao, we may never be able to come back to a Mayweather fight.”

Regardless of whether Maidana wins or loses, the mere thought of a Pacquiao-Maidana fight is something the boxing world would salivate over.