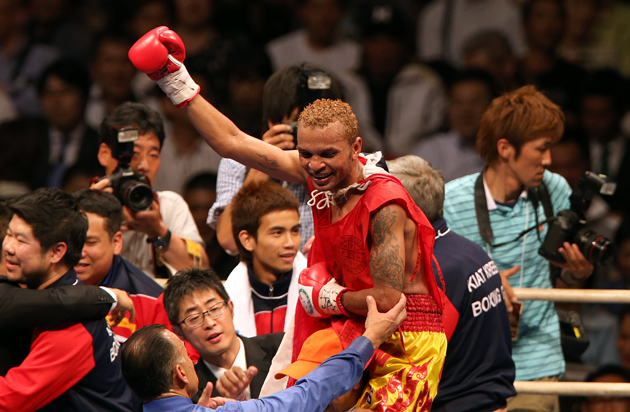 Amnat Ruenroeng successfully defended his IBF flyweight title with a hard-fought split-decision over McWilliams Arroyo on Wednesday at Liptapanlop Hall in Nakhon Ratchasima, Thailand. The scores were 115-114 and 114-113 for Ruenroeng, and 114-113 for Arroyo on the third.

Rueonroeng (14-0, 5 knockouts), of Chonburi, Thailand, built an early lead with his superior movement and accuracy before being floored in round six by a left hook-right hand combination from Arroyo (15-2, 13 KOs). Ruenroeng beat the count but was in considerable danger as the hard-punching Puerto Rican looked to finish the hometown favorite.

Luck shined on him when referee Pat Russell ended the round early after misinterpreting the five second clapper for the bell to end the round. Arroyo couldn’t capitalize on his earlier success as fatigue began to set in. The fight turned ugly, with both being warned for roughhousing.

Ruenroeng is currently rated No. 7 by THE RING at 112 pounds, while Arroyo recently entered at No. 10.

The loss is the 28-year-old Arroyo’s first since his fourth bout in 2010, when he lost a decision to Takashi Okada. He earned the title opportunity with a second-round knockout of previously unbeaten prospect Froilan Saludar in June.

With the win, Ruenroeng, 34, wraps up a highly successful 2014 that began with his victory over top-rated contender Rocky Fuentes in January to win the vacant belt he now wears. He followed that performance up by defeating previously-unbeaten two-division champion Kazuto Ioka by split-decision in Japan this past May.