Anthony Joshua on sparring with Wladimir Klitschko: ‘I felt I belonged in there’ 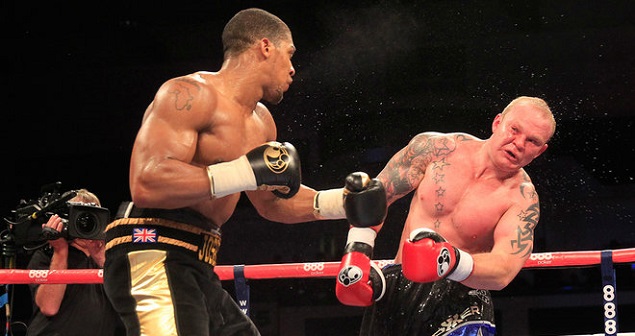 Anthony Joshua said he felt like he belonged in the ring with RING heavyweight champion Wladimir Klitschko during a recent sparring session in advance of Saturday’s clash with Konstantin Airich at the Phones 4u Arena in Manchester, England.

“I felt I belonged there but Wladimir is different to everyone else. He’s been the champ for 10 years; he’s in a league of his own,” said Joshua of Klitschko, who is also an Olympic gold medalist.

“For me to be where Wladimir Klitschko is, there’s a lot of work to be done. I can see myself potentially being there but to own it and make it look easy, there’s a little bit of work to be done. I feel I am talented enough to become the world champion but to stay there for as long as he has, keep defending the titles and stay hungry for it, that’s what I need to learn.”

Boxer and trainer, Johnathon Banks was in attendance during the Klitschko-Joshua sparring session and said he was impressed with the British heavyweight in an interview with RingTV.com.

“The funny thing is that I was just training Anthony Joshua in camp with Wladimir,” said Banks, who is preparing Klitschko for Pulev. “I was giving him hand work and all of that stuff. I think that he’s a really good fighter, man, and he can fight. I like him. I like him a lot.”

Joshua was last in action for a second round stoppage of Matt Skelton in July, while Airich, 35, is coming off July’s unanimous decision loss to Denis Bakhtov, 34, who is scheduled to fight Joshua on Oct. 11 at the O2 Arena Millenium Dome in Greenwich, London.

Note: Joshua quotes from a release