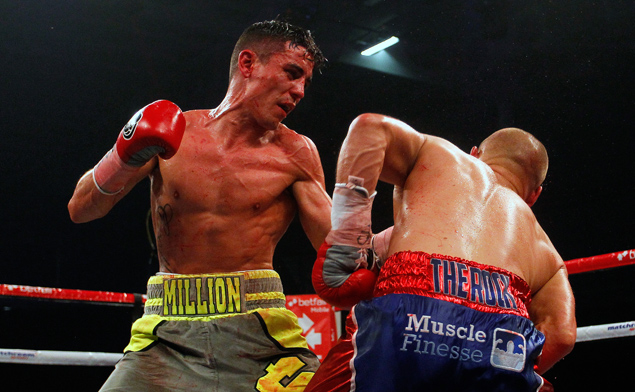 “It was more or less a done deal.” said Crolla, still clearly disappointed. “As the weeks went by I started to have doubts because the announcement was repeatedly delayed. Suddenly, just before the cutoff date, it came out that Abril would be defending against Edis Tatli and that was that.

“It was a strange time but I have heard that Abril has managerial and promotional issues, which probably explains his inactivity. I was just devastated to have lost the chance, although I had no time to sulk because I had to get myself in great shape for Sept. 13.”

Crolla (28-4-1, 11 knockouts) has been a professional for eight years and is aware that patience outside the ring is almost as important as patience inside of it. His new opponent, Gamaliel Diaz, doesn’t own a world title and has lost 11 of 51 bouts, but he is experienced and will present a significant threat this weekend in Manchester.

“I’ve watched Diaz on YouTube and he’s dangerous,” said Crolla, who has diligently studied the Mexican slugger. “If you look at his record, a large number of those losses came at the very beginning of his career and the rest were to world class opposition like Robert Guerrero, Jorge Linares, Humberto Soto and, more recently, Takashi Miura.

“He fought for a world title against Muira and anyone who knows boxing can tell this kid can fight, but I’ve got to come through in style. I won’t be underestimating Diaz, because I know what he’s capable of, but there are really big fights ahead of me if I win this one.”

There are quality operators at 135 pounds and Crolla has seen two of them up close. The 27 year old sparred with Raymundo Beltran in Los Angeles, and also looked on from ringside when Terence Crawford scored a unanimous decision over Ricky Burns.

Crawford and Beltran are set to meet for the WBO lightweight title on Nov. 29 and the Englishman is currently the No. 4 contender within that organization’s rankings.

Crolla said, “The WBO route is the preferred option. If Crawford beats Ray Beltran then it seems likely that he’ll move up to junior welterweight. Don’t get me wrong Ray (Beltran) is no gimme and he’s a class act, but if that belt does become vacant then I should be there or thereabouts for an eliminator.

“Crawford is an extremely good fighter and it’s hard not be impressed. He was even better than I expected him to be against Ricky Burns and, no disrespect intended, it looked like he had more gears to go through. He still won that fight well and, despite losing to Dejan Zlaticanin, Ricky is a world-class lightweight.”

As previously stated Crolla respects Beltran a great deal but he still can’t see his old sparring partner lifting a world title at the second time of asking.

“You’ve got to make Crawford the favorite following the win over (Yuriorkis) Gamboa,” said Crolla, with a sigh. “I do think he’ll have a tough night with Ray who, unlike Gamboa, is a big lightweight and very durable. There was a question as to whether Gamboa should even have been fighting at 135 pounds, whereas I know Ray is exceptionally strong at this weight.

“Beltran is a live underdog but I think Crawford will retain his title.”

“Million Dollar” Crolla fights out of Joe Gallagher’s gym, which is situated in the Manchester area. It contains a vast stable of quality fighters and has enjoyed unrivaled success in British boxing terms, but this reporter was keen to know if the Abril saga and Scott Quigg’s inability to secure a showdown with Leo Santa Cruz has been detrimental to motivation.

“Not at all,” said Crolla, shrugging off any negative vibes. “There’s a great atmosphere in the gym and four or five of us are appearing on the Manchester show, with three more competing in Germany when Paul (Smith) fights Arthur Abraham for a world title. Everyone in the gym is getting ready for a fight and we’re all pushing each other on.

“I’ve been working hard since I stopped John Murray and I’ll be at my best on Sept. 13. It’ll be an entertaining fight with Diaz, because the styles will gel, and the fans will definitely get their monies worth.”

British fans can see Scott Quigg, Anthony Crolla and Anthony Joshua in their respective fights live and exclusive on Sky Sports 1 HD from 8.00pm. Tickets are available from www.phones4uarena.co.uk or www.matchroom.co.uk