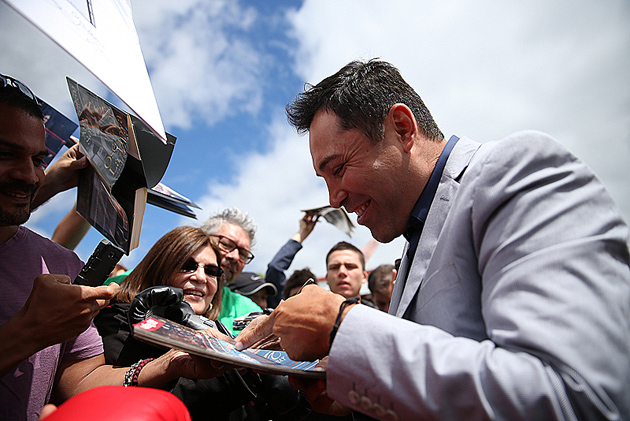 The proclamation is in appreciation for the nearly billion dollars in tourism revenue generated by De La Hoya generated for the county and the Las Vegas Strip over the course of the 10-time titlist’s 16-year career, according to the release.

De La Hoya, 41, fought in Nevada 28 times over the course of his career and said in December that he was “honored and appreciative to be inducted into the International Hall of Fame” for 2014.

De La Hoya dedicated his career to his mother, Cecilia, who died of breast cancer in October 1990. Cecilia passed wishing that her son would triumph in the Olympics, which he eventually did by earning the gold medal with a victory over Germany’s Marco Rudolph on August 8, 1992 in Barcelona, Spain.

A Mexican-American from East Los Angeles, De La Hoya turned professional as the “Golden Boy” under promoter Bob Arum of Top Rank Promotions with a first-round knockout of Lamar Williams in November 1992. That was the beginning of a career during which he garnered 10 title belts and defeated 17 champions over six different weight divisions.

De La Hoya is being recognized as part of the kickoff to Nevada’s Cultural Weekend Celebration of Mexican Independence Day while being in Las Vegas for Saturday’s rematch between RING number one-ranked pound-for-pound fighter Floyd Mayweather Jr. and Marcos Maidana at the MGM Grand.

The presentation to De La Hoya will begin at 1 p.m. before the “Welcome To Fabulous Las Vegas Nevada” sign and the event is open and free to the public.

TOMASZ ADAMEK TO FIGHT ARTUR SZPILKA IN POLAND ON NOV. 8

Polish heavyweights Tomasz Adamek and Artur Szpilka will clash on Nov. 8 at the Krak├│w Arena in Krakow, Poland, according to a release from Main Events’ CEO Kathy Duva.

The 37-year-old Adamek (49-3, 29 knockouts), 37, was last in action in March when he dropped a unanimous decision to unbeaten Vyacheslav Glazkov. The loss to Glazkov ended a five-bout winning streak for Adamek, who had previously suffered defeat by 10th-round knockout to then-WBC heavyweight titleholder Vitali Klitschko in September 2011.

“It is good to be fighting in Poland,” said Adamek. “This will be the biggest fight in Poland since my fight with Vitali Klitschko. I look forward to satisfying my Polish fans with a knockout of Szpilka.”

Szpilka (16-1, 12 KOs) is looking to rebound from a 10th-round stoppage to undefeated Bryant Jennings in January.

“I will surprise a lot of people with my style and really, I don’t care about people seeing Adamek as a clear favorite,” said Szpilka, 25. “I learned a lot losing to Bryant Jennings at Madison Square Garden. There will be no distractions this time. I feel stronger and better than ever. Just watch me on Nov. 8. You will not believe your eyes.”

A former cruiserweight titleholder, Adamek debuted as a heavyweight in October 2009 when he stopped countryman Andrew Golota in the fifth round in Lodz, Poland.

“This is a fantastic heavyweight fight that will be a great event for Poland,” said Duva, of the fight to be televised by Polsat via pay-per-view. “When Tomasz fought Andrew Golota and then Vitali Klitschko in Poland, it felt like all of Poland was watching. I’m sure that will be the case again on Nov. 8.”

Tapia (21-1, 13 KOs), 24, is being matched against Donatas Bondorovas (18-5-1, 6 KOs), of Chicago, in a return to the site of his last fight in June, where he scored an 82-second knockout over Keenan Collins. Prior to Collins, Tapia lost in December by sixth round stoppage to James Kirkland.

“I want to entertain. This is what I live for,” said Tapia, in a release. “I love boxing. I like being inside the ring more than anything.”

The 25-year-old son of former middleweight contender Eugene “Cyclone” Hart, who also trains him, Hart (14-0, 11 KOs) was last in action for a sixth round stoppage of Shujaa El Amin in June. Hart will face Puerto Rico’s Robert Acevedo (8-2, 5 KOs). Having lost two of his past three fights, Acevedo is coming off a majority decision loss to Lee Campbell in April.

Also on the card against opponents to be determined are Canadian welterweight Mikael Zewski, junior welterweight Mike Reed, and featherweight Toka Kahn Clary of Providence, R.I.