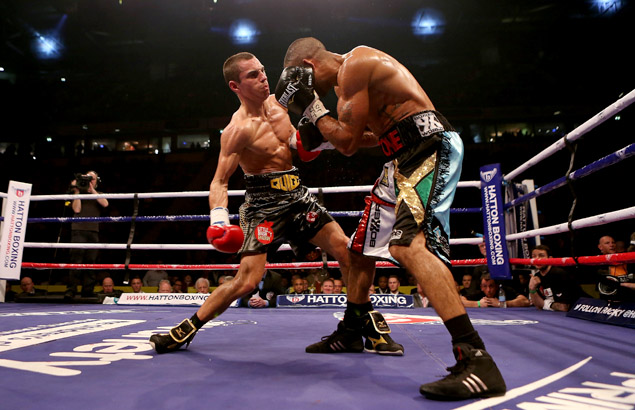 Unbeaten British star Scott Quigg is accustomed to being left at the altar. This year the regular WBA junior featherweight titleholder has looked on helplessly as two opponents pulled out at short notice, and a direct challenge to WBC beltholder Leo Santa Cruz also fell on deaf ears.

[Editor’s Note: THE RING only recognizes Guillermo Rigondeaux as the WBA champion at 122 pounds.]

Undeterred Quigg, THE RING’s No. 4-rated junior featherweight, marches on and will face former world title challenger, and late replacement, Stephan Jamoye this Saturday night in Manchester. Victory, which is expected, could lead to a reversal of fortune with a money spinning bout against Belfast’s IBF champion Carl Frampton looking good for 2015.

These are exciting times for British boxing. Kell Brook and Amir Khan look set to face off in a stadium mega fight next summer, former Olympic gold medalist James DeGale is mandatory challenger to IBF super middleweight champion Carl Froch and a showdown between Quigg and Frampton is unquestionably bigger than ever.

Frampton, THE RING’s No. 1-rated junior featherweight, boxed brilliantly on Saturday to claim his first world title, at the expense of Kiko Martinez, and immediately expressed his desire for a showdown with Quigg following the unanimous decision win.

Quigg was all ears and discussed this Saturday’s bout, as well as his domestic rival, in a recent discussion with RingTV.com.

RingTV.com: How have you been mentally over the last couple of weeks? The late replacement scenario must come with a dose of d├®j├á vu?

Scott Quigg: It’s not ideal, but I know how to deal it. I just need to focus on what I need to do on Saturday night and be the best I can be. As long as I’m clever, sharp defensively and my power and skills are there then it doesn’t matter who they put in front of me. That’s the way I dealt with it last time, and that is how I’ll deal with it this time. I won’t let it frustrate me.

RTV: Paulus Ambunda is out and Stephane Jamoye is in. What do you know about him?

SQ: Jamoye has been around. He’s only 24 years old but seems to have been operating at a decent level for a very long time. He’s fought Leo Santa Cruz, Tomoki Kameda and was recently in with the WBC bantamweight champion (Shinsuke Yamanaka). Jamoye has a lot of valuable experience at the top level and his youth will also stand him in good stead. He’s maturing, he’s hungry and this fight definitely has my full attention. Luckily we brought in sparring for Ambundu and the change of opponent hasn’t affected that side of my preparation. Both Jamoye and Ambundu are short and squat, so the sparring was ideal.

RTV: We spoke a couple of months back when you proactively called out Leo Santa Cruz. Did you ever hear anything back from his people regarding that fight?

SQ: I know Eddie (Hearn) approached his team when neither of us had an opponent. We asked if he would be interested in coming to the UK and, if not, said that we’d be willing to come to the US. We would have scrapped the Manchester show and faced Santa Cruz on the undercard of the Mayweather-Maidana rematch. The message that came back was they poured cold water on it and now he’s fighting Manuel Roman.

RTV: You must have been very disappointed.

SQ: A fight between us seemed ideal and would have been a perfect chief support to the Mayweather show. When the Santa Cruz fight fell through I thought they must have something big lined up, but that card is finalized and there isn’t a fight close to that quality beneath the main event. Nobody is happy with the Mayweather and Maidana undercard and it’s very poor. I don’t understand why we couldn’t fight, but I need to focus on my immediate future.

RTV: Carl Frampton called you out after dethroning IBF champion Kiko Martinez at the weekend. What is your direct response to the challenge?

SQ: First of all congratulations to Carl Frampton on becoming world champion. He put in the best performance of his career, boxed well and got the job done. Martinez was nowhere near as ferocious as I expected him to be, but Carl won that fight in style. To answer your question, how can he call me out when we’ve already put an offer on the table? This fight hasn’t happened because Frampton’s team declined to sit down at the negotiating table. This is a massive fight and everyone wants to see it. I have to take care of business on Saturday night, and we’ll take it from there.

RTV: When speaking to BoxNation in the UK, Carl Frampton said, “Eddie Hearn has to remember that I bring the legitimate belt. I bring the fans. I’ll fight Quigg in Manchester, but there are options.” The way I read that is Frampton would be seeking the lion’s share of the purse. What is your response?

SQ: You need to remember something. Who else is there in Northern Ireland? Frampton is the only fighter at this level, so of course the fans will turn out for him. In terms of television, how many people tuned into BoxNation (UK subscription channel) for the Martinez fight? Maybe twenty or thirty thousand. I fight on Sky Sports where we can draw up to two or three hundred thousand viewers. Barry McGuigan (Frampton’s manager) has said that I can’t move tickets, but that’s all nonsense. A fight between Carl and I sells out anywhere and it also draws the casual fans. For that to be the case both of us must have significant fan bases. If you put me in against Leo Santa Cruz at the Manchester Arena then it sells out. If you put Frampton in against Jeremy Parodi in Belfast then it won’t. It’s all to do with the quality of the match up.

SQ: Yes. This fight isn’t big because of me and it isn’t big because of Carl Frampton. It’s big because of both of us. Everything has to be split down the middle. The only way this fight doesn’t happen is if Barry McGuigan’s ego gets in the way. Barry thinks he runs the show and he doesn’t. He’ll stop the British public, and Carl, from being a part of one of the biggest domestic fights there’s ever been. It will all come down to penny pinching on Barry’s part. Take the ego out of the equation and it’s a 50/50 split. All that needs to happen is Eddie, Barry, Carl and I sit around a table and thrash a deal out. It’s as easy as that.

RTV: Chris Avalos is the IBF mandatory challenger for Carl Frampton’s belt. What is your understanding of the situation, now that Matchroom have signed Avalos? Could Quigg vs. Frampton happen next, or will Avalos have to be accommodated first?

SQ: The fight between me and Carl could happen next. It’s huge and we could sign a contract to say that the winner defends against Avalos next. Maybe Avalos can be given step aside money. There’s always options when the stakes are this high. However, to repeat, none of this matters unless I do the job on Saturday.

RTV: Are you looking forward to facing Jamoye?

SQ: When you put in the hard work and dedicate yourself this is what you’re doing it for. I’m aware that massive fights are just around the corner and, although that brings pressure, it’s the type of pressure that I thrive on. The feeling I get when I enter the arena is something I will never forget. To be headlining this show is something that I’m very proud of and I intend to be in this position for a very long time.

British fans can see Scott Quigg, Anthony Crolla and Anthony Joshua in their respective fights live and exclusive on Sky Sports 1 HD from 8.00pm. Tickets are available from www.phones4uarena.co.uk or www.matchroom.co.uk