From The Telegraph: McGuigan: Frampton can be best Irish boxer ever 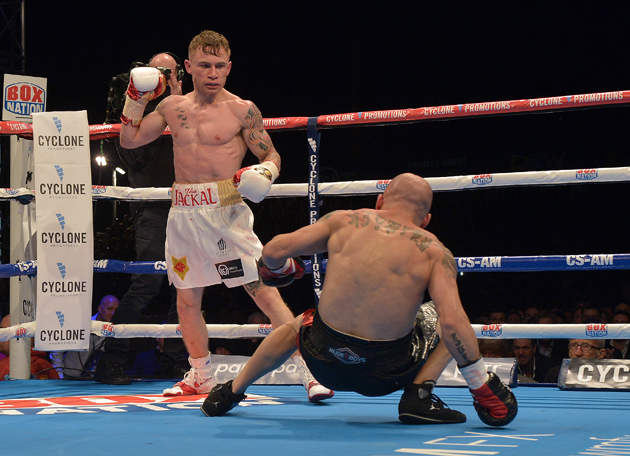 Carl Frampton could go on to become the greatest Irish boxer of all time, according to the promoter Barry McGuigan, after the young Ulsterman claimed his first world title in an epic 12-round war against the relentless, teak-tough Spaniard Kiko Mart├¡nez on Belfast’s Titanic Causeway on Saturday.

Frampton, now unbeaten in 19 contests, secured the International Boxing Federation’s super bantamweight (8st 10lb) title by a unanimous decision against a proud champion whose pursuit to punish the Irishman never wavered. Frampton was pushed to the limit in a thrilling contest. He will have learnt much from this encounter.

“This kid could end up being the best Irish fighter who ever lived,” McGuigan said. “He could go up to featherweight and super-featherweight because he knocks out lightweights in the gym. He could move through the weight divisions and there are some great fights out there for him.”

Frampton will have five to six months out and is likely to make his first defence against the IBF’s NoÔÇë1 challenger, the American Chris Avalos, with the Odyssey Arena in Belfast the probable venue in the first quarter of 2015.

The other option is a domestic contest with the unbeaten Mancunian Scott Quigg if the fight can be made.