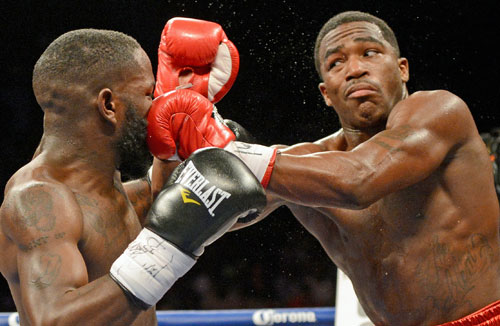 Adrien Broner: I think we learned when Broner was beaten up by Marcos Maidana that he isn’t the next Floyd Mayweather Jr., particularly in the welterweight division. That doesn’t mean he isn’t a very good fighter. Broner gave a strong performance in his unanimous-decision victory over Emmanuel Taylor on Saturday night in Cincinnati, Broner’s hometown. Taylor (18-3, 12 knockouts) stalked Broner (29-1, 22 KOs) for most of the fight and through a combination of ability and determination fought the hometown favorite on even terms for six rounds. Then Broner took over, landing more consistently hard, accurate punches – sometimes in vicious combinations – and punctuating his effort with a brutal knockdown in the closing seconds. I still think Broner will have to throw more punches and possibly move his feet more than he does to realize his potential but the version of Broner we saw on Saturday night is formidable at 140 pounds. Is he formidable enough to beat fighters like RING champ Danny Garcia, Lucas Matthysse and Lamont Peterson? I have my doubts but I wouldn’t be shocked if he beats one of the above.

Another big fight, another mistake by an official. Argentine slugger Lucas Matthysse was destined to knock out an overmatched Roberto Ortiz on the Broner-Taylor card. He didn’t need referee Benjy Esteves’ help. Matthysse (36-3, 34 KOs) sent Ortiz (31-1-1, 24 KOs) to one knee with a perfect body blow late in the second round. The Mexican, in obvious pain, stayed down to recover as best he could and then clearly beat the 10 count and was steady on his feet. And it was early in the fight; Ortiz had taken no real punishment aside from the body shot. Still, Esteves waved his arms to signal a knockout. I suppose someone could argue something like, “He has to be up and ready to fight. And because he spat out his mouthpiece, he wasn’t ready.” Baloney. The spirit of the rule is that you’re allowed to continue if you’re on feet before the count of 10 and in condition to fight. The fact Ortiz probably wouldn’t have survived much longer doesn’t absolve Esteves, who should be admonished. The good news is that Matthysse, one the most exciting fighters in the world, is in position again for a big fight. Broner called him out after he beat Taylor. That’s a great matchup.

Carl Frampton reached legendary status among Irish boxers by outpointing Kiko Martinez to win the IBF junior featherweight title Saturday before an adoring hometown crowd in Belfast. Frampton (19-0, 13 KOs) dominated Martinez (31-5, 23 KOs) in every way, outboxing and outpunching the tough Spaniard to win a wide decision. Frampton had stopped Martinez in nine rounds when they met last year. Clearly, the gifted Irishman is the better of the two. After the fight on Saturday, Barry McGuigan, Frampton’s promoter, said he “could end up being the best Irish fighter who ever lived.” That might be a stretch because Irish-born fighters like Jimmy McLarnin and Mike McTigue were pretty darned good. I get McGuigan’s point, though: Frampton seems to be the complete package and, at 27, his best lies ahead of him. ÔÇª Andre Berto (29-3, 22 KOs) returned to boxing after shoulder surgery and a 15-month layoff with an impressive unanimous-decision victory over Steve Upsher (24-4-1, 6 KOs) on the Broner-Taylor card. The victory followed consecutive losses to Robert Guerrero and Jesus Soto Karass. Berto will never be a great fighter but he demonstrated what we already know about him: He’s a passionate warrior who is fun to watch. ÔÇª

Roman Gonzalez (40-0, 34 KOs)turned in another spectacular performance on Saturday in Tokyo, stopping Akira Yaegashi (20-4, 10 KOs) in nine rounds to win THE RING flyweight championship. Gonzalez was winning by a large margin on all three cards at the time of the stoppage. The victory gave Gonzalez, who also picked up the WBC belt, three titles in as many weight classes. He is one of the best – and underappreciated champions – in the sport. The top junior bantamweights should start looking over their shoulders. ÔÇª Former lightweight titleholder Juan Diaz (40-4, 19 KOs) easily outpointed Carlos Cardenas (21-9-1, 14 KOs) on Saturday in Laredo, Texas, running his record to 5-0 in his comeback. Diaz hasn’t faced an elite opponent since he was outpointed by Juan Manuel Marquez in 2010. We still don’t know what he has left.