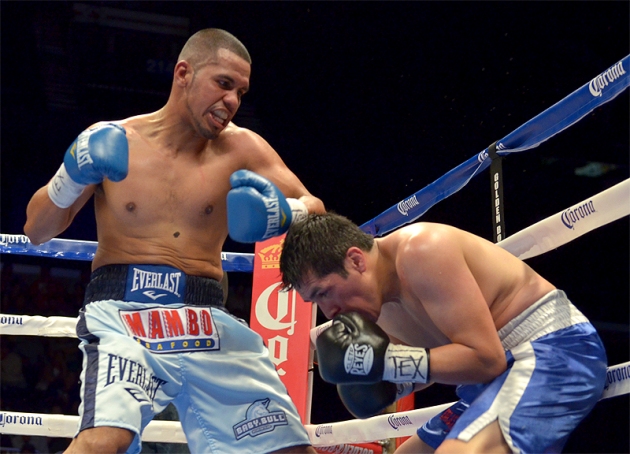 Former unified lightweight titleholder Juan Diaz is unbeaten since returning to the ring after a self-imposed retirement early last year.

While he has looked good thus far, it remains to be seen when Diaz will fight a contender on a path towards fighting for a world title.

The bout headlined a Top Rank card and was broadcast on UniMas.

Diaz took time away from the sport following a unanimous decision loss to Juan Manuel Marquez in July of 2010. Diaz focused his time on his family and a trucking business he owns in the Houston area, where he resides.

Diaz returned to the ring in April of last year, stopping Gerardo “Pipino” Cuevas, Jr. in the sixth round. He won three more bouts in a row before stepping inside the ring on Saturday night against Cardenas, who had lost three of his previous fights.

From the opening bell, Diaz pressed the action, a familiar tactic that fight fans have been accustomed to seeing. Rather than fight off the ropes, Cardenas circled around the ring and countered anytime Diaz was within punching range.

As the bout progressed, Diaz was able to connect often, especially with double left hooks to the body and head. He was also able to connect with lead overhand right hands to the head of Cardenas.

Midway through the fight, Cardenas was able to land often thanks in part by throwing and landing first behind a jab. That rally was short-lived as Diaz was able to cut off the ring more and forcing Cardenas to back up. Cardenas’ punch output dropped with each passing round during the second half of the fight.

During the final round of the fight, Diaz pressed for a knockout, but Cardenas was able to survive until the final bell sounded.

In the opening televised bout on the “Solo Boxeo” broadcast, lightweight Casey Ramos won a hard-fought six round unanimous decision over Angel Hernandez.

Both fighters had their moments during the first two rounds of the fight. Ramos began to take assert himself during the middle rounds by landing the cleaner and more effective punches. Ramos was able to counter or even beat Hernandez during most exchanges.

The fifth round saw the best exchanges in the fight as both fighters stood their ground and traded punches. Some of these exchanges brought the fight fans in attendance to their feet as both scored with hard and effective punches to the head and body.

Both had their moments in the sixth round, although it was Ramos who again landed the more telling blows.

In a non-televised bout, welterweight Brad Solomon remained unbeaten with a sixth round technical knockout over Freddy Hernandez. Time of the stoppage was 1:36.