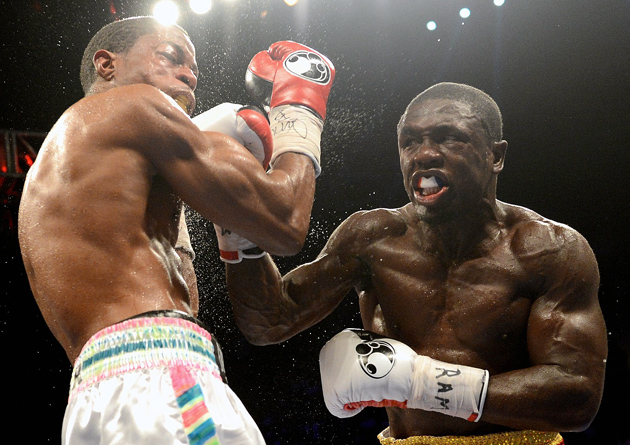 Andre Berto fought for the first time since suffering a 12th-round TKO and serious shoulder injury against Jesus Soto Karass last July, winning a 10-round unanimous decision over Steve Upsher on the Adrien Broner-Emmanuel Taylor undercard on Saturday in Cincinnati, Ohio. The former two-belt welterweight titleholder won by unanimous scores of 99-91.

Berto (29-3, 22 knockouts), a 31-year-old veteran from Winter Haven, Florida, had only fought four times since 2011 going into the Showtime-televised bout, losing three of those bouts in punishing fights against Victor Ortiz, Robert Guerrero and Soto Karass. Numerous injuries contributed to his inactivity, and the former U.S. amateur standout looked shaky in spots during the fight.

However, Upsher (24-3, 6 KOs) was only able to take advantage of Berto’s ring rust in spots, usually when the two engaged in close. Despite being the taller and rangier fighter, Upsher was unable to use his height and reach against Berto, who controlled most of the fight from a distance with a stiff jab.

Upsher, whose record was built on mostly journeyman opposition at the legendary Blue Horizon fight venue in Philadelphia, was game throughout but didn’t have the punching power or the class to overwhelm Berto.

Upsher, who dropped an eight-round decision to former welterweight beltholder Luis Collazo in 2012 and suffered a fourth-round TKO to prospect Eddie Gomez last year, lost his third bout in a row on Saturday.