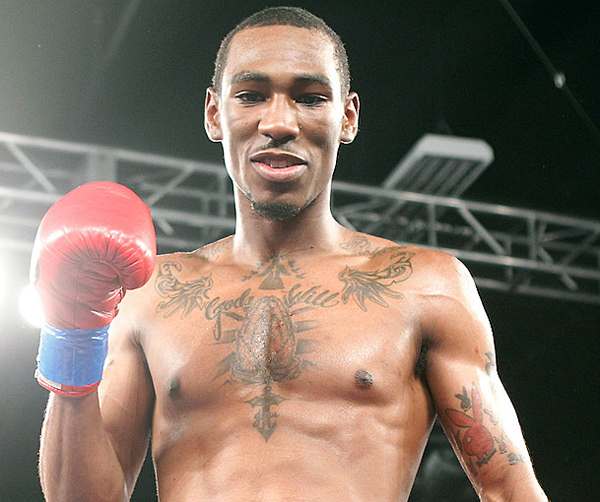 Best night of pro career: Easter believes his best performance to date was his most recent fight against gritty Venezuelan boxer Carlos Cardenas.

“I would say my last fight because I wasn’t 100 percent going in the ring and I still performed great,” Easter told RingTV.com on Tuesday. “It’s still early in my career, there’s many more fights down the line, it’s just gonna go up from here.

“I fought against a veteran guy; he’d been in there with other great performers. It was a guy that wouldn’t go down, I had to pull out all my moves and strengths to keep it going and I still finished the fight feeling like I did in the first round.”

The victory also saw “E-Bunny” have to dig deeper than he had been forced to in his previous outings.

“I took a punch for the first time and I bounced back, that comes from being in shape.” he said.

His trainer Mike Stafford, who also works with Adrien Broner, liked what he saw from his man.

“It was a good performance, the guy was tough,” Stafford said. “It was a step up. Robert beat him easily and the guy didn’t want to fall.”

Worst night of pro career: At this stage Easter has had everything his own way. That said he credits his third fight against Jose Valderrama as an off night of sorts.

Although Easter forced his opponent to retire at the end of the opening stanza he feels the nature of the performance wasn’t what he expects from himself.

“I wasn’t happy because I was rushing a lot of shots, he was cut and I wanted a KO instead of a TKO,” said Easter. “I rushed a lot of my shots and I was power punching, it just wasn’t me, I usually set up a lot of shots and go from there.”

Next fight: On Saturday, Easter meets journeyman Roberto Acevedo (13-13-3, 1 knockout) in his adopted hometown of Cincinnati, Ohio, on the undercard of fellow “Band Camp” member Broner’s bout against Emmanuel Taylor.

Acevedo’s only fight in the past two-years was when he retired at the end of the opening round against uber-prospect Erickson Lubin in February this year.

The 28-year old Puerto Rican born southpaw has been stopped six times notably against Adrien Broner (TKO 4), Rances Barthelemy (TKO 1), and most recently against Lubin. He has also lost when he faced Khabib Allakhverdiev, Ray Robinson and Mickey Bey.

Easter isn’t concerned who he faces, he prefers to be kept in the dark and leaves his team to select his opponent.
“I tell my coaching staff, never tell me my opponent’s name ’cause I don’t like making new friends, just tell me which stance he is and we go from there.

“I believe I don’t have to study opponents because at the end of the day when I get in the ring they’re gonna have to adjust to me.”

Why he’s a prospect: Easter entered the pros with vast amateur pedigree, winning over 200 bouts. Interestingly he never won a national title.

“I always got to the semi finals or finals and lost so coming from the amateurs I always wanted to see what it felt like to be champion, that’s why I train hard today because I can’t go back and get that feeling.”

Easter fought several up and coming prospects in the amateurs, including Michael Reed (10-0, 6 KOs), he beat Ryan Martin (8-0, 4 KOs) at the “last-chance” tournament. He narrowly lost to Julian Rodriguez (5-0, 4 KOs), 22-18, at the semi final stage of the 2012 USA Boxing national championships.

Easter, a 2012 Olympic alternate, decided to make the transition later that year after an invitation from three-division beltholder Broner.

“Adrien taught me a lot,” Easter said. “He reached out to me after the last-chance tournament and said ‘I want you to join the camp’. He took me under his wing. He showed me the ins and outs of boxing.”

Since then Easter has become an integral member of Band Camp, regularly sparring with the likes of IBF 140-pound titleholder Lamont Peterson, Broner, Hank Lundy and Ricardo Williams Jr.

Along with Broner, Easter and several other fighters who work under the watchful eye of Stafford, often set up camp at their home away from home, Washington, D.C.

“Going up to (Washington) D.C., working with Barry Hunter and Patrice Harris and the Head Banger’s family, they’re like family to us. They welcomed me with open arms,” he said.

“I would love to have 20 or 30 Robert Easters because when you tell him what to do he does it. He’s a real coachable kid,” Stafford said.

Why he’s a suspect: The tall prospect hasn’t shown any obvious weakness at this stage of his career. Though Easter understands that to reach the top and become world champion he must continue to progress.

He feels he needs to improve his patience inside the ring whilst ironing out some amateur wrinkles.

“I would say I have to work on my patience more than anything,” commented Easter. “I get out there and hit a guy and I smell blood and go for the kill.

“I have good speed, I have good power but coming from the amateurs you get mixed up in having little time so you throw punches in bunches but in the pros you got to have patience and timing, this game is a chess match.”

Easter’s last two bouts have gone the eight round distance, with the added time in the ring against better quality of opposition he appears to be improving in that area.

“My last fight was the first fight my opponent didn’t touch the ground,” said Easter. “In my ninth fight I dropped the guy (former 130-pound world title challenger Daniel Attah) twice, he beat the count.”

The Ohio-born fighter has been down once in the amateurs.

“It was a lucky shot but I got up and won the fight. I don’t really question my chin, I have a great chin,” he said.
Stafford wants his charge to utilize his considerable height and reach to his full extent.

“Just keeping his distance and working off his jab more which is coming more and more,” said Stafford. “He has a tendency to want to get inside, we try to teach him distance and use his jab and then work his combinations cause he’s got a hell of a left hook, which I think is his strongest punch, he thinks it the right hand I think it’s the left hook.”

Some may see him being around the eccentric Broner as having a negative impact on a young up-and-comer’s career.
But while Broner is outgoing and brash, Easter is his own man.

“Adrien’s outgoing, he loves the attention but that’s him, everybody is their self, I’m out going as well but I’m not as blunt as Adrien (laughs),” he said.

Story lines: Easter was born in Toledo, Ohio. He’s always been involved and around boxing as far back as he can remember.

“I was actually born in a boxing family,” he said. “From my grandpa teaching my father and uncles, even my aunt boxed.

“As soon as I was able to walk I was in the gym throwing punches on the bag and sparring him (my father) while he was on his knees. I was born to do this.”

Although he played other sports Easter always thought boxing was the sport for him believing he would one day make a name for himself.

Growing up was tough at times for Easter, who comes from a big family, the third eldest of eight children, initially living with his mother after his parents separated.

“Everybody goes through a struggle in their lifetimes, inside or outside an urban community,” said Easter. “I had my share of struggles too, living with a mom who took care of eight kids. As I got older I moved with my dad, he coached me inside and outside the gym.”

His father was his head trainer growing up but when they started entering tournaments his father Robert Sr. met Mike Stafford, the two became good friends and started working together.
Easter is eager to become a world champion.

“Oh yeah, the title should be coming soon and if I can keep ending these guys the way I am it’ll be sooner than you think,” he said. “I see myself in a matter of a year or two having a belt and being a world champion.”
Stafford sees similar potential.

“I think he’s gonna be a true champion one day, at 135 pounds he’s a freak of nature, he’s strong with a good right hand, good jab,” said Stafford. “He can be a champion. He’s a good young kid. He has a good grounding, his dad works with him a lot when he goes home to Toledo. He’s got the whole package.”