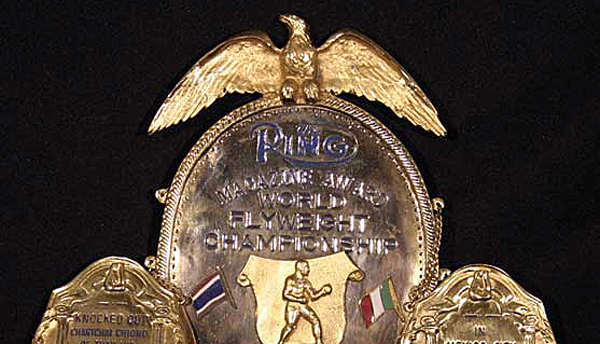 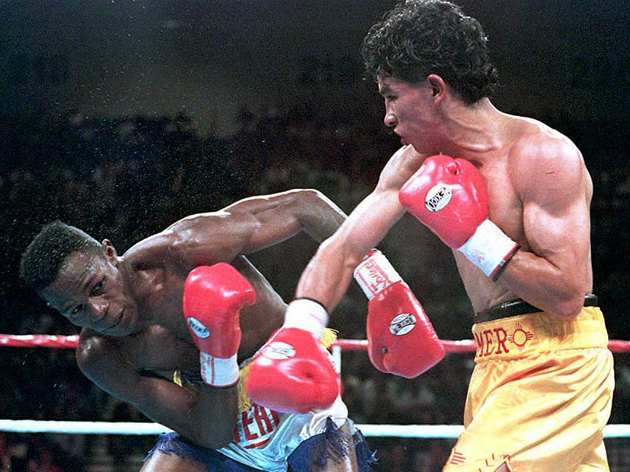 While the United States has been the most successful nation in terms of winning world championships, its history in the 112-pound title picture has been limited, at best. New York City’s Fidel LaBarba, Corporal Izzy Schwartz, Frankie Genaro and Willie La Morte briefly wore versions of the title in the late 1920s while Philadelphia’s Midget Wolgast enjoyed a lengthier tenure in the 1930s. But America’s flyweight well dried up following the reign of Honolulu’s Salvador (Dado) Marino, who dethroned Terry Allen in August 1950 to become the first grandfather to hold a world boxing crown, and lost it to previous conqueror Yoshio Shirai in May 1952. Since then, nothing.

Because most Americans zoom past 112 sometime during their middle school years – and because the few that remained there into adulthood chose to become jockeys instead of boxers – America’s footprints were light at best. More than four decades later, a charismatic and dynamic punching fighter from the land of Stars and Stripes broke onto the scene.

For Albuquerque’s Danny Romero, a flyweight title run didn’t seem to be in the original plan because his first nine pro fights were staged at super flyweight or bantamweight. But when Romero scaled 112¾ pounds in stretching Silverio Porras in two rounds thoughts of a future at flyweight appeared more real. To that point he had scored nine knockouts in 10 fights and after dropping down to 112 “Kid Dynamite” lived up to his billing by adding 13 more victories, including the last 12 by KO. Many of those knockouts were aired on U.S. television, which lifted his profile, burnished his reputation and led HBO to air his challenge of IBF king Francisco Tejedor on the undercard of George Foreman-Axel Schulz.

Tejedor, a lanky boxer-puncher from Colombia, was making the first defense of a crown vacated by Thailand’s Pichit Sithbanprachan, who retired after winning a hard-fought split decision over Jose Luis Zepeda. Just 63 days after stopping Zepeda in seven to capture the title, he was standing across the ring from Romero. A telling stat: Tejedor had fought 42 times in Colombia and won all 42, including 30 by knockout. When he fought away from home he was 0-2 – and this fight was being staged in Las Vegas. Humberto “Chiquita” Gonzalez, then the WBC junior flyweight champion, stopped Tejedor in three rounds before his Mexican fans while South Korean Seung-Koo Lee outpointed him over 10 in Seoul, a decision Tejedor hotly disputed. Since then Tejedor had won six in a row and all but one by knockout.

As they received their final instructions at ring center, the 27-year-old Tejedor might have had enjoyed advantages in height (one inch) and reach (six inches) but his 20-year-old opponent was, by far, the heavier man. According to HBO’s “unofficial scale” Tejedor had put on four pounds since weighing in 26 hours earlier while Romero had packed on 13¾ pounds – or 12 percent of his previous body weight.

HBO analyst Larry Merchant succinctly put the matter into perspective: “What that means, basically, is that we have a featherweight fighting a bantamweight for the flyweight championship of the world.”

The difference in body weight was graphically evident as the action began: Tejedor sported a willowy, long-limbed frame that was almost giraffe-like while Romero’s physique was thick, compact, sculpted and powerful. The strategies were almost as apparent – Tejedor rapidly circling clockwise behind an extremely busy jab and Romero bobbing and weaving under them and firing power punches at every opportunity. Tejedor’s jabs (76 according to CompuBox), mobility and activity (27 of 92 for Tejedor, 20 of 50 for Romero) trumped the American’s occasional bombs in the first and those jabs began to swell the area under the challenger’s right eye in round two. Midway through the second Romero buzzed Tejedor with a hard right along the ropes but because Tejedor took the punch well and continued to box effectively it became evident that the champion would surrender his crown so easily.

Romero throttled up his pursuit in round three, which, at times, forced Tejedor to retreat at almost supersonic speed. Romero smartly attacked Tejedor’s thin ribcage, though more than a few strayed low enough to draw repeated warnings from referee Richard Steele. But Romero began to connect upstairs as well, especially with a three potent rights and a follow-up hook near the end of the round.

Tejedor began the fourth by landing a sneaky lead right to the chin that Romero absorbed with nary a flinch, further illustrating the vast difference in power. That said, Tejedor’s repeated connects and strategic movement troubled the American, who was forced to reset and readjust his aim time and again. With every passing second Tejedor’s confidence grew, and by mid-round he was raking Romero with combinations that landed from multiple angles. Romero, on the other hand, was reduced to firing occasional power shots that didn’t even come close to hitting the target.

A frustrated Romero hit Tejedor on the break early in round five but Tejedor paid it no mind and continued his effective hit-and-run tactics. He even came out ahead during a vigorous mid-ring exchange in the trenches that stretched deep into the round’s final minute.

Through five rounds Tejedor had out-landed Romero 144-98, mostly because he out-threw him 452-330. Those numbers also reflected his strategic control, a control that Romero needed to reverse as soon as possible.

Tejedor cracked Romero with a looping right lead to start round six, showing Romero that gaining control wouldn’t be that easy. Plus, whatever rights Romero landed had little effect on the Colombian, who continued to plan his work and work his plan. As the round swung into its second half a subtle shift occurred when Romero began to work behind his jab instead of winging indiscriminate power punches. That one adjustment proved key, for suddenly Romero started connecting with straighter and harder right hands. Although they had little effect on Tejedor’s ability to execute, it did mark a potentially significant turn.

As Tejedor rested between rounds his corner began paying more attention to a small cut over the right eye and those speaking to him, primarily chief second Amilcar Brusa, did so with a more urgent tone. In round seven Romero continued to work better behind the jab and for the first time in the fight he was the sharper, more effective fighter. He also was keeping up with Tejedor in terms of volume and the result was a lengthy, punishing exchange at ring center. An explosive series of blows rocked Tejedor in the final seconds, cementing his best round of the fight thus far.

The eighth saw the action shift to long range, where both men enjoyed periods of effectiveness. However, Tejedor wasn’t moving nearly as much as he did in the earlier rounds while a more patient Romero fired clusters of short punches instead of seeking the one-punch knockout. One heavy right late in the round snapped into Tejedor’s face, caused the crowd to react in admiration and capped off a round in which Romero out-landed the champion 29-9.

His confidence surging – Romero told his corner he’s going to “box the s*** out of him” – the challenger dictated the terms in round nine by moving and punching whenever he pleased while a growingly desperate Tejedor curiously pursued a toe-to-toe slugfest. A series of Romero power shots forced Tejedor to back away on subtly unsteady legs and a power right to the chin only worsened his situation. The movement that was so prevalent in the early rounds was now gone for Tejedor and Romero was more than willing to exploit that weakness, especially with body shots and rights over the top. The once-huge punch margins for Tejedor was narrowed to just 229-225 after nine rounds. Tejedor’s hopes to break Romero in the late rounds appeared to be working in reverse; it was now Romero who was poised to break Tejedor.

Romero’s bombs helped him edge a competitive 10th while his pinpoint jabs and quick-fisted flurries captured the 11th. The extra weight was now a benefit instead of a hindrance, for Romero had a flyweight’s speed and endurance while possessing a featherweight’s power.

That power came to the fore 48 seconds into the final round when a right to the chin had Tejedor tottering. Showing maturity far beyond his 20 years, Romero took his time, pounded the body and seized opportunities only after his eyes perceived them, not before. Romero punctuated his sterling late-rounds surge with a volley of unanswered power shots that sent Tejedor through the ropes with just eight seconds remaining in the fight. The only question remaining was whether Romero would win by decision or by knockout. Tejedor answered the first part of the question by arising at seven while the three officials answered the second by unanimously declaring him the new champion (116-111, 116-112, 115-112).

“We beat him at his own game,” Romero told Merchant. “I was too eager, too hyper, too nervous with all you great people (HBO). It was just too overwhelming. I just had to take my time and out-box him.”

The future indeed was bright for “Kid Dynamite.” He called out Humberto Gonzalez and Michael Carbajal during the post-fight interview and his precocious performance portended many successes to come. He followed up with a sixth round KO over Miguel Martinez but then was on the wrong end of THE RING’s 1995 Upset of the Year as journeyman Willy Salazar scored a seventh-round non-title TKO win due to Romero’s severely swollen eye. Romero went on to win the IBF title at 115 and fought Johnny Tapia in a long-awaited Albuquerque turf war. When Tapia won a wide decision, the luster that shown so brightly after the Tejedor fight was all but gone.

As for Tejedor, the Romero fight began a dramatic fall. Over the next nine years he became a name for up-and-comers who, more often than not, walked out a down-and-outer. In all, he went 4-18-1, including 10 straight defeats to end his career as well as six KO losses within the first four rounds.