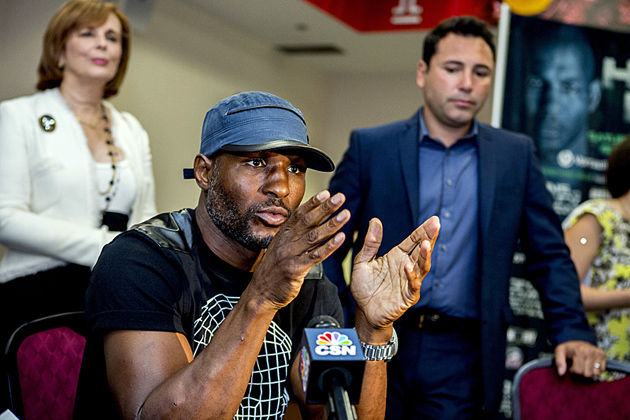 PHILADELPHIA, Pennsylvania – Bernard Hopkins will run to the flame. The living legend and future Hall of Famer has taken that approach his whole life. He wouldn’t be Bernard Hopkins if he didn’t embrace that mantra.

It’s why a little nudge from Naazim Richardson, Hopkins’ trainer, stirred “The Alien” into wanting to pursue Sergey Kovalev, one of the most devastating punchers in the game today.

“When I told Bernard that Kovalev once killed a guy in the ring, I knew then we were going to wind up fighting him – that’s why Bernard is taking him on,” Richardson said. “That’s why Bernard wanted this fight.”

It’s why the 49-year-old Hopkins (55-6-2, 32 knockouts) grinned at the notion that Kovalev may be a bit more than he could handle when the topic was broached at a media roundtable at Temple University’s Liacouras Center on Tuesday to announce the Nov. 8 title fight at Boardwalk Hall in Atlantic City, N.J.

Hopkins will attempt to unify his WBA and IBF light heavyweight titles with the WBO 175-pound belt held by Kovalev. The fight will be broadcast live on HBO in the U.S.

Hopkins, with dots of salt peppering his one-day-old bristle, dominated the scene once he entered the conference room. When he faced off against Kovalev for the TV cameras and gathered media, it was as if he was reaching down into the Russian expatriate’s soul and saying, “You’re not going to kill me, because I can’t be killed.”

“It’s absolutely true, when I found out Kovalev killed someone in the ring, it is why I wanted to fight him, because most people run from the fire and I’m the one guy that runs to it,” Hopkins said in a brief moment alone. “To me, I’m in a comfortable position. I know that I am the underdog again, but to prove people wrong and change people’s thinking, they’re two things that I actually love to do. I’ve been doing all my life and throughout my career.

“To be successful at defying everyone, you get addicted to it. I’m a big boy, and hopefully, the ones that think I don’t have a shot, they can be a big boy and suck it up when they’re wrong – again.”

Hopkins never gets bored with defying odds. It’s part of his DNA, his personality. And the list he knows, and anyone who knows boxing knows, is a long one. There’s Felix Trinidad, Kelly Pavlik, Antonio Tarver, and before any of those high-profile bouts, the then-undefeated Joe Lipsey, in March 1996, when Kovalev was a 12-year-old playing ice hockey in Chelyabinsk, Russia.

“I don’t think Sergey has been involved in this type of event, this is a big event and it does something to you,” said Oscar De La Hoya, President of Golden Boy Promotions, which is running the promotion with Main Events, Kovalev’s promoter. “Most importantly, Sergey has never faced anyone like Bernard Hopkins.

“I think Bernard’s style, it’s not confusing, but it can frustrate you, because you’re not going to get your way against Bernard Hopkins. I would know. I’m a perfect example. Although I was doing well in the fight against Bernard, those last rounds I didn’t get my way. Bernard is a master at what he does. It’s not just inside the ring, it’s outside the ring. Psychologically, I think Bernard is already up 2-0 and they haven’t thrown a punch.”

Richardson kept stressing that Kovalev is a monster worth the respect he’s received. The old-school trainer joked Kovalev should have stomped his way into the conference room and grabbed Hopkins by the neck, saying, “Old man, you’re not going to beat me.”

“No, no, instead [Kovalev] came in and tip-toed, talking about how he’s not going to go for the knockout and all of that other stuff,” Richardson said. “Kovalev is thinking one thing, but saying all the nice things for the promotion. But I know him, he’s thinking something else. He thinks he’s going to knock the old man out. I know Bernard thinks this guy is more dangerous.

“But this brings Bernard back to the Trinidad fight. I know all the bulls—- that will lead up to the fight, but the bottom line is, they think they have the better puncher, I think I have the better fighter.

“This is Trinidad all over again – Bernard is back on course. As long as there is danger, he’ll keep on walking through the landmines. When I work with him the gym, I really believe that. The most dangerous situation is the one he wants.”