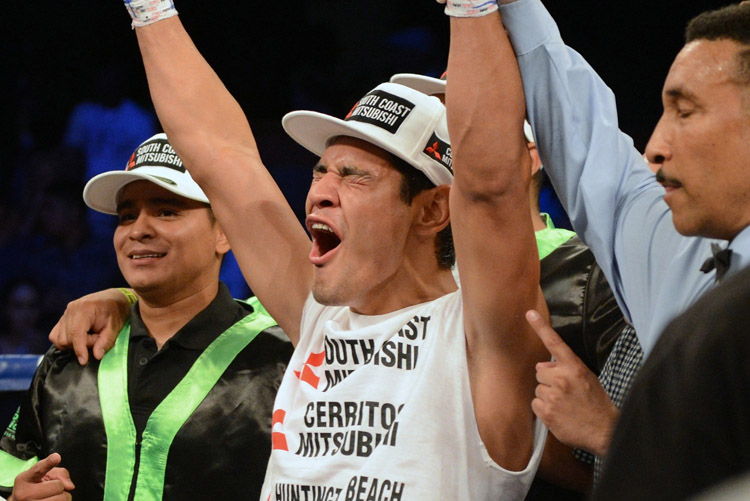 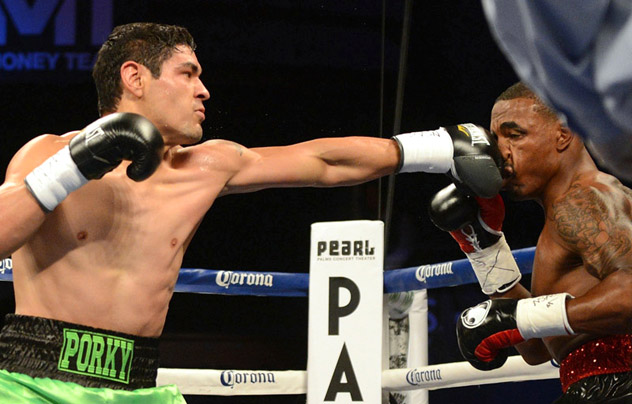 LAS VEGAS – With Floyd Mayweather Jr. nearing the end of his career, it is evident that Mayweather Promotions needs to see its young stable of fighters begin to blossom into individuals who can help carry the banner into the new frontier. Saturday’s “ShoBox: The New Generation” card, dubbed as “Desert Showdown” saw the first eight of Mayweather Promotions fighters come out victorious. However, Rogelio Medina spoiled The Money Team sweep with a scintillating third-round knockout over arguably Mayweather’s top prospect, J’Leon Love.

Although fellow TMT stablemate Badou Jack laid waste to Medina last December with a sixth-round TKO, Love would have no such luck against the heavy hitting Mexican with a powerful knockout punch. Medina (33-6, 27 knockouts) was determined to test Love’s shaky chin from the outset and pressed forward in search of the one punch that could alter his previously unbeaten opponent’s night and halt his path to a title fight.

Things weren’t looking up for Love – who fell to 18-1 – as he continued to fight on his heels while Medina continued his seek and destroy mission. That assignment would be completed in Round 3 as Medina backed Love into the ropes and uncorked an equilibrium destroying a right hand that found its home. Love remained upright, but frozen, and a sickening left hook from Medina followed that sent Love crashing to the canvas right in front of Mayweather. Completely wrecked, Love tried to get to his feet but couldn’t beat referee Tony Weeks’ 10 count. Time of stoppage was :39.

Fortunately for the rest of Mayweather Promotions, things were on the up and up.

Determined to prove that his stunning first round knockout loss to Derek Edwards in February was more fluke than formality, Badou Jack returned to the ring and clinically outclassed the pesky Jason Escalera en route to a unanimous decision victory in a 10-round super middleweight showdown. Known as a notoriously slow starter, “The Ripper” granted Escalera the opportunity to let his hands go early but Jack stuck the jab in his opponent’s face to disrupt any rhythm the Union City, N.J., fighter tried to settle into. The punch output picked up as the rounds went on as Jack doubled and tripled up on the jab. Although busier, Escalera was far less accurate and couldn’t muster up enough of an attack to take Jack out of his game. It wasn’t much by way of entertainment, but Jack was effective when he put his punches together and wrapped his punches around Escalera’s guard. In the end, it would be Badou Jack finding his way back to the familiar house of victory as he earned scores of 100-90, 100-90 and 99-91. The victory brings Jack’s record to 17-1-1 while Escalera falls to 15-3-1.

Ronald Gavril scored an emphatic sseventh-round TKO over Thomas Falowo in an entertaining super middleweight bout that was scheduled for eight rounds. Gavril (10-0, 8 KOs) looked like he was going to cruise to victory early as he worked behind the jab well and followed with looping shots. A third round knockdown seemed to spell Falowo’s demise, but the product from Pawtucket, RI refused to go away and mounted a spirited comeback late in Round 4 and briefly stunned Gavril with a right hook. But the Mayweather Promotions fighter remained composed and operated diligently off the jab to regain control of the fight and continue to peck away at the steel will of Falowo (12-3). In Round 7, Gavril launched into a searing assault that started with a wicked left hook and had Falowo turtling up. Sensing the end was near, Gavril sent a series of power shots with bad intentions toward Falowo’s head until referee Robert Byrd finally called a halt to the fight at the 2:14 mark.

After knocking around Eric Cason for the first two rounds, Andrew Tabiti scored his seventh knockout in seven professional fights after a triple helping of straight right hands sealed the deal in the third. Cason (2-2) proved to be no match for the hulking cruiserweight and was assaulted from the opening bell. Tabiti (7-0, 7 KOs) kept his opponent on shaky legs throughout but was determined to be the first fighter on the card to keep a fight from seeing the judges’ scorecards. The barrage of right hands forced referee Russell Mora to call a halt to the fight at the 2:18 mark.

Luis Arias improved to 9-0 with a unanimous decision victory over the game but overmatched Angel Martinez in an eight-round middleweight bout. Scores were 80-72, 78-74 & 78-74

UK veteran Ashley Theophane pitched a near shutout with his one-sided, yet relatively uneventful, unanimous decision victory over Daniel Calzada (10-11-2). It was Theophane’s (36-6-1) third victory in a row since dropping a split decision to Pablo Cesar Cano on the undercard of Mayweather-Canelo last September. Judges scored it 80-72, 80-72 & 79-73.

Lanell Bellows (9-1-1, 6 KOs) battered Codale Ford (4-4) to the head and body throughout the duration of their six round super middleweight affair and cruised to a unanimous decision victory. All three judges scored it a shutout, 60-54.

Ladarius Miller kept his unbeaten record intact with a unanimous decision victory over Eddie Diaz in a four round welterweight attraction. Miller (4-0, 1 KO) survived a second round scare when he was rocked by a right hand from Diaz (0-2). But Miller shook it off and outboxed Diaz the rest of the way to earn scorecards of 40-36, 40-36 and 39-37

Cortez Bey improved to 10-1-1 with a hard-fought split-decision victory over Jacinto Quintana in a 6 round welterweight opener. Judges say it 58-53 and 57-56 for Bey while the third judge saw it in favor of Jacinto Quintana – who fell to 2-4 – with a scorecard of 57-56.