Rios, Orozco and De La Hoya in action on Oct. 9 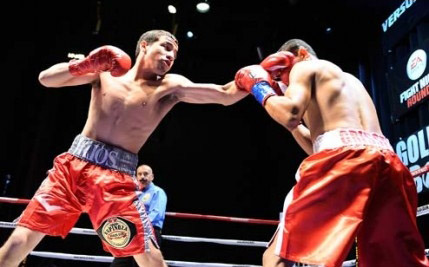 “It’s always an exciting night when we can put on an event at Fantasy Springs and this will be no exception. Ronny Rios and Antonio Orozco are two of this area’s most talented fighters and we’ll see if they’re ready for the next level on Oct. 9,” said Oscar De La Hoya, president of Golden Boy.

“I’m also looking forward to seeing the new De La Hoya era take charge with my cousin, Diego in the ring again and meeting everyone on fight night and talking about this great sport and what we can do to make it even better.”

Last in action for a unanimous decision over Andrew Cancio in April, Rios (23-0, 10 knockouts), 24, will face Robinson Castellanos (19-10, 12 KOs) as the headliner to a FOX Sports 1 and FOX Deportes broadcast at Fantasy Springs Resort Casino.

Castellanos, 32, suffered a ninth round stoppage loss in his most recent bout to Rene Alvarado in April that ended his run of 11 consecutive wins, seven by way of knockout.

Orozco, 26, is coming off a unanimous decision over Martin Honorio in May and will take on former titleholder Steve Forbes.

The 37-year-old Forbes has won just three of his past 13 fights and has lost five straight, including a unanimous decision in June to Emmanuel Lartei Lartey.

De La Hoya, 20, has a record of 6-0 that includes five knockouts and is coming off his second consecutive stoppage victory, a fifth round TKO over Miguel Tamayo last month.