Badou Jack looks to rebound against Jason Escalera on Saturday 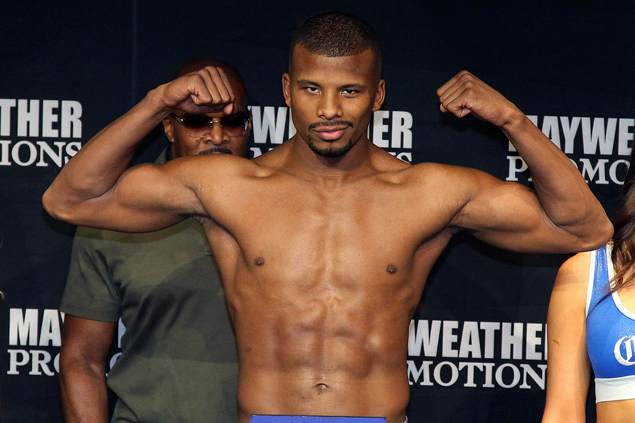 LAS VEGAS – Life isn’t always peachy when you are part of The Money Team.

Although being a fighter under the Mayweather Promotions banner has its perks, it also has its fair share of pitfalls.

Badou Jack found out the hard way when unheralded Derek Edwards knocked him out in the first round this past February. For any other fighter, a loss comes with the territory and is not deemed as the end of the world. But when you are riding shotgun with the best pound-for-pound fighter in the world today, the expectations can be unrealistically high. And that leads to a shocking knockout loss being viewed as more catastrophic than it really is.

On Saturday, Jack (16-1-1, 11 knockouts) will step back into the ring against Jason Escalera as the co-featured bout on the Mayweather Promotions card billed as the “Desert Showdown” at The Palms in Las Vegas. It will be Jack’s opportunity to redeem himself after his first loss and attempt to silence the naysayers who Jack says have come out in droves ever since he joined Mayweather Promotions.

“When I was promoted by Lou DiBella I only heard good things from people. But after I signed with Floyd, all the haters came out,” Jack told RingTV.com as he prepared for his Showtime-televised super middleweight bout at the Mayweather Boxing Club. “People who know boxing know that they can’t compare us to Floyd. But (casual fans) expect a lot more because we get a lot of exposure.”

After suffering his first loss in such a devastating fashion, Jack took a brief vacation to reflect but has been in the gym for the past five months to correct the mistakes he made against Edwards. In fact, Jack was originally scheduled to have a rematch with the man who served him his first professional loss until Edwards decided to back out of the fight.

“Leonard Ellerbe asked me if I wanted the rematch and I said hell yeah because that’s all I had been thinking about the whole summer,” said the native Stockholm, Sweden who now resides in Las Vegas. “But I guess he pulled out because he wanted more money and we have this guy now.”

“This guy” is the 15-2-1 Jason Escalera, who survived a shaky first minute against previously unbeaten Norbert Nemesapati to clobber him for another 23 minutes en route to a unanimous decision victory on ESPN’s “Friday Night Fights” earlier this month.

Jack admits he’s felt a bit letdown after the news came that he wouldn’t get his opportunity at redemption. However, if the 2008 Olympian learned anything from his loss, it’s not to look past any opponent. “I can never underestimate or overlook anyone. Even though he didn’t look good in his previous fight, I can’t look at that. That will never happen again,” he said.

Although the expectations are a bit unrealistic for fighters like Jack to be as dominant in the ring as their leader, it doesn’t mean that CEO of Mayweather Promotions, Leonard Ellerbe, is going to stroke egos and handles his fighters with kid gloves.

“I’m hard on the guys,” Ellerbe said when asked how he manages the public’s expectations of the fighters versus his own after a loss. “In order to be associated with this brand there’s a high level of expectation to perform. Things happen but when you know a guy lets it slip through the cracks you say what you are supposed to say. Nobody is going to babysit anybody.

“These are grown men who are not making their pro debuts,” Ellerbe continued. “They have experience coming up through the amateurs. It’s all about seizing the moment. You’re not always going to come out on top but you have to learn from the pitfalls you experience. People like Floyd and myself are going to express that to our fighters.”

When asked how the private conversations between he and Mayweather went after his first loss, Jack reveals that boxing’s cash cow offered some very helpful advice, and a little bit more. “Floyd said that it was a flash knockdown and I should have stayed down and collected myself,” Jack explained, while acknowledging that getting up quickly after the first knockdown due to being embarrassed didn’t allow him to get his legs back under him and made him an easy target for Edwards to finish off.

“He actually bought me a car right after that,” Jack said with a sheepish smile.

No, life isn’t always peachy when you are part of The Money Team, but it certainly has its perks.